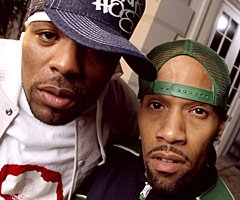 I feel like the Internet is constantly being used for nefarious purposes, be they Chuck Norris Facts or attempting to get a bridge named after Stephen Colbert or convincing people to see a movie called "Snakes on a Plane."

I have to admit that I attempted to start a campaign myself, a charge to secure fall employment for Mr. Eric Balfour. How did I do? So-so. Balfour isn't on any shows at all this fall, either established or new. That ain't right. But I've made my peace since Balfour will be returning to "24" this winter. Not quite "Mission Accomplished" on my end, but it's something.

Thus today I unveil my newest campaign, one even more doomed to failure:

It's time to get "Method & Red" released on DVD.

Many of you probably don't remember "Method & Red," a somewhat self-explanatory show that ran for nine episodes in the summer of 2004, part of FOX's entirely unsuccessful attempt at year-round original scripted programming. It starred rappers Method Man and Redman as a pair for frequently stoned musicians who moved into a suburban New Jersey neighborhood. Yes, Method Man and Redman were playing entirely sterotypical versions of their own personae, but they were surrounded in their new home by equally stereotypical white folks, including Beth Littleford, as a realtor who they called Neighbor Lady, and Peter Jacobson. Naturally, Method and Red didn't seem to fit in well with their neighbors, but by the end of each episode, with the help of some prime bud, they were all able to learn to get along.

What can you say about a show that introduced the world to legendary characters like Downtown Clowny Brown, evil music critic Keith Debeetham and the frequently incarcerated Chu Chu Hillfong?

Look, "How High" has sold fairly well on DVD. Or at least I'm assuming it has, without any kind of statistical evidence. Why wouldn't "Method & Red" move some copies? The show was being watched by a few million people a week.

FOX has been good in recent years with releasing short-lived shows on DVD. Sure, we may never see "The Ortegas" or "Still Life," but viewers have been able get the entire run of shows like "Wonderfalls," "Action," "Greg the Bunny" and "Keen Eddie" on DVD. If I'm being honest, "Method & Red" isn't as good as any of those shows.

It's not as good as the second, third or fourth seasons of "Everwood," which are all in some sort of weird limbo because the first season didn't sell well enough, but I'm sure that there are oodles of "Everwood" fans out there banging the drums for that one.

Thus, I urge any and all readers to join my quixotic quest to get "Method & Red" released on DVD.