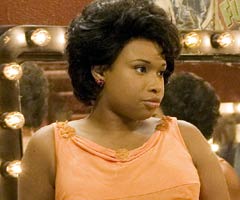 "Dreamgirls"
Director: Bill Condon
Fien Print Rating (Out of 100): 72
In a Nutshell: Mull this phrase over in your head: Oscar winner Jennifer Hudson. Given that I'm talking about an "American Idol" bootee here, a singer who gained her reputation as much for her early reality show departure (and subsequent accusations, not so much by her, of racism) as for her performance on the show (characterized by over-singing and bug-eyes when she wasn't blowing the roof off), that makes the phrase "Jennifer Hudson Oscar winner" one of the most unlikely four-worders this side of "California governor Arnold Schwarzenegger" or "guest starring Patty Hearst." And yet, here we are. I'm hesitant to go into any extensive details on "Dreamgirls," which I saw on Wednesday night, largely because this is the kind of month-early screening where embargoes are only acceptably skirted in cases of rapture. My feelings came up short of rapture, though the film's production values are beyond reproach and Oscar-worthy from every costume to every set to every carefully composed shot.

But it's hard to argue with several performances. Eddie Murphy can also expect a minimum of an Oscar nomination for taking his "James Brown's Celebrity Hot Tub Party" caricature of a '60s soul singer and turning it into a deeply wounded, human performance. But for all of the stars in the cast -- Beyonce is solid, Jamie Foxx less so -- the movie ends up being Hudson's entirely. She isn't going to make anybody forget about Jennifer Holliday, but that assumes you know who Jennifer Holliday is or remember her performance as Effie, the deposed lead singer of the Dreamettes. If you don't, Hudson erases reality show stigmas in an instant -- this acclaim is bound to just off cheese "Real World London" star Jacinda Barrett -- and by the time she gets through the show-stopping "I Am Telling You" (again, try not to remember Jennifer Holliday) you're entirely willing to accept that she's done something amazing here. The most notable thing about her performance is that director Bill Condon doesn't need to finesse her screentime, he doesn't need to avoid shooting her in close-ups or staying on her for dialogue or intense singing scenes, as so often happens with first-time film performers. Even if I might have wanted her to go just a bit deeper at times (and even if her voice is darned good, but not quite remarkable), she sells her biggest moments like a pro.

Of course, the movie also peaks at "I Am Telling You," a flaw I assume holds true of the stage production as well. "Dreamgirls" is hardly the only musical to fall apart in its second act. Heck, "Oklahoma" hardly has a second act at all and it's one of my all-time favorites. But so much emotion is invested into the nearly 10-minute "I Am Telling You" -- the film's Oscar team ought to just send out DVDs with only that sequence and watch the trophies spill in -- and nothing that follows is anywhere near as good. And that's nearly half the movie that lags.

We're in the midst of a year that makes last year's thin cinematic crop look bountiful and given the reaction from the Academy member-heavy screening I went to, "Dreamgirls" may be the kind of film that stands out and stays strong as the disappoints arrive and fade into the background. You can count on this one getting between 10 and 12 Oscar nods and I wouldn't be at all surprised if five or six trophies are already 100% in the bag (including possibly Hudson, assuming they keep her in the supporting category).