Stanley Tucci Is a Giant Phallus 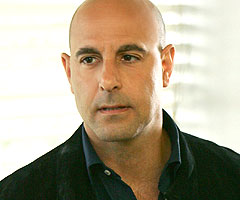 He may have competition in Stanley Tucci. Although he's one of our finest actors, Tucci isn't at his best in the new CBS drama "3 Lbs." His character is a hazy, derivative blur (I like to pitch "3 Lbs." as "'House' With Doctors!") and with his head clean-shaven, Tucci wanders around for 44 minutes looking like a giant penis. If you like that sort of thing, I highly recommend "3 Lbs."

In any case, whenever you look at Stanley Tucci, I'd like you to think "big schlong." I'm sure he wouldn't mind. 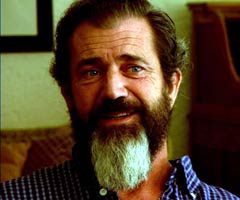 When Jewish groups expressed early concerns about "The Passion of the Christ," Mel responded quickly. Rather than showing his movie to the worried Jews to allay those fears, he showed the film to fundamentalist Christians who vouched for the movie's accuracy. Then Mel expressed disappointment and confusion that Jews hadn't been pacified and rallied his base to go see the movie. It was utterly brilliant. Mel made hundreds of millions by fracturing his audience. Would he have made less if he'd just shown the darned movie to Abraham Foxman and the ADL beforehand? I say yes.

Well, he's at it again. Mel gets busted for drunk driving and embarrassing reports swirl about his alcoholic ramblings about the Jews. Instantly, Disney gets concerned that his new movie, "Apocalypto," might be unpromotable, which leaves the studio up a creek. So first Mel goes on "Good Morning America" an gives semi-apologetic sob story to Diane Sawyer -- he was remorseful, but he also blamed his Anti-Semitic comments about the Jews on the wrong done to him during the "Passion" fiasco. Now, Mel's showing unfinished prints of "Apocalypto" to some very specific hand-picked people. Working on the margins again, Gibson is screening the unfinished movie for Latino organizations and leaders and they love it. He's showing it to some industry friends. And they love it. And now everybody's writing "Mel Gibson has made a brilliant movie, but will anybody be able to see past his personal misdeeds?" articles. Come December, after a few more of these articles, it will be impossible to dislike the movie without showing that you're less willing to forgive and forget than Mel himself. It will be impossible to dislike the movie on its cinematic merits, with all pans only being yet another example of the media persecuting Mel, refusing to forgive him.

I decided I'd written too many MovieWatch posts in a row. Decided to mix it up a little.
Tweet