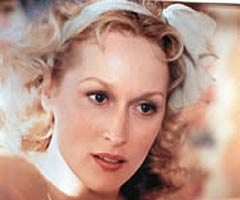 Edward Copeland, who keeps threatening to rename his blog something other than Edward Copeland on Film, is compiling a survey on the best and worst Oscar winners for Best Actress. You may recall Edward's fantastic best picture winner survey earlier this year.

Because I'm an agreeable and helpful blogger, I've done my best to participate, though looking through the list of winners, I was shocked to realize how many of the honorees from the '30s, '40s and '50s I've managed to miss. Thus, if it turns out that Jennifer Jones ("The Song of Bernadette"), Helen Hayes ("The Sin of Madelon Claudet) or Shirley Booth ("Come Back, Little Sheba") deserve places on either of these two lists, I've been obviously delinquent.

I put the worst first here, because it was just a more competitive race. Skim through my choices and then feel free to zip over to Edward's site and submit your own opinions.

1 [the worst]) Helen Hunt, "As Good As It Gets" (1998)- It's almost impossible to figure out what point the Academy was making with this award. Was it that TV actors are people too? Or was it just that Hunt was the only American against four far superior Brits (Julie Christie, Judi Dench, Kate Winslet)? Hunt's punishment came the next year when she presented Robert Benigni with the least deserved best actor trophy in Oscar History.

2)Katharine Hepburn, "On Golden Pond" (1982)- This takes nothing away from her other Oscars, frequently (but not always) deserved, but I shouldn't be laughing so hard at a performance that isn't intended to be funny.

4)Jessica Lange, "Blue Sky" (1994)- Perhaps the worst year for actresses in Hollywood history. Jessica Lange may have been twitchy and over-the-top in a truly bad movie, but her competition included Jodie Foster for "Nell" (Ouch) and Susan Sarandon for "The Client" (Really?) and Winona Ryder for "Little Women" (REALLY?!?!?)

5)Audrey Hepburn, "Roman Holiday" (1954)- Many supporting actress Oscars have been given just for being adorable and winsome, but how many lead trophies have been presented merely for being tremendously loveable? Oh and don't take this as a sign I don't like the performance or the movie, but is it really Oscar-worthy? [In retrospect, perhaps the greatness of this performance is in how bad I feel about listing it here?]

1)Meryl Streep, "Sophie's Choice" (1983)- If you're grading on "Degree of Difficulty," this performance is impossible to top.

2)Jodie Foster, "The Silence of the Lambs" (1992)- It's a very internalized turn, but I admire it for this reason: Going opposite one of the hammiest best actor performances in history, Foster never loses control or ceases to hold every shot. That's impressive.

3)Jane Fonda, "Klute" (1972)- Oscar voters love to honor beautiful women for playing prostitutes, which may be the Academy's attempt to encourage other beautiful women to enter the Oldest Profession. Of all the Oscar-winning portrayals of hookers, though, this is the best.

4)Elizabeth Taylor, "Who's Afraid of Virginia Woolf?" (1967)- I don't always like broad theatricality and shrieking, but for some reason this performance has an emotional core for me, even if Taylor is shouting to the back row at all times.

5)Claudette Colbert, "It Happened One Night" (1935)- Maybe not the most technically complicated of performances, but I just love the idea of an Oscar going for this kind of work. This goes on the list of most random Oscar-winning performances along with Julie Andrews in "Mary Poppins," Diane Keaton for "Annie Hall" and Kathy Bates for "Misery." Those three are great performances as well, but I'm going with Colbert here just for the historical value.
Tweet