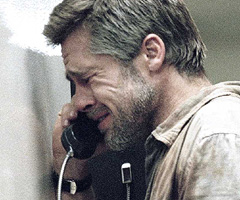 "Babel" wouldn't be so insufferable and unbearable an experience if Inarritu weren't such a clearly gifted filmmaker. That's the quality that sets "Babel" apart from "Crash," frankly -- The web of coincidences, petty ironies and caricatured characters here are presented by a man of cinematic talent with an awareness of the medium. That's why "Crash" is laughable and "Babel" is harder to dismiss, but also harder to sit through. Like "Amores Perros" and "21 Grams" before it, "Babel" is well-acted across the board (the presence of movie stars Brad Pitt and Cate Blanchett in one narrative is distracting, but becomes an imbedded commentary about the artistic imperialism and entitlement of Hollywood) and thanks to DP Rodrigo Prieto, it looks great. It's also numbing from the end of the first scene as two Moroccan boys playing around with a rifle set off a chain of unhappiness. I spent so much time dreading the next misfortune, but I wasn't invested in any of these people or their plights. They were pawns being pushed around a board by screenwriter Guillermo Arriaga, whose "Three Burials of Melquiades Estrada" script was both his best crafted and most humane (and a better meditation on linguistic and cultural borders, frankly).

I can't help but find it sad that of the 2006 films by the Three Amigos (Inarritu plus Guillermo del Toro and Alfonso Cuaron), *this* is the one nominated for best director and best picture. Sigh.
Tweet