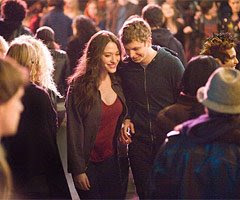 "Nick and Norah's Infinite Playlist"
Director: Peter Sollett
Fien Print Rating (Out of 100): 69
In a Nutshell: Although it's a movie about high school kids and it features stars of several successful high school movies, "Nick & Norah's Infinite Playlist" is a teen romantic comedy that isn't really intended for teens. It stars actors who look like 20-something hipsters reading dialogue that sounds like it was written by 20-something (or 30-something) hipsters. The movie is sweetly innocent, but not in a way that speaks to or reflects genuine innocence so much as a nostalgic yearning for an innocence gone by. It's principle sentiment is "John Hughes Meets 'After Hours,'" so I guess I'm saying it's a movie about the young at heart made by and for people who may not be so young themselves?

There's nothing wrong with that, but I have reason to believe, based on the audience reaction around me, that "Nick and Norah" is a movie that doesn't play so well to the audience it's been targeted at and yet may not have been properly targeted to reach the audience that would actually find it to be a pleasant relief.

More thoughts after the bump, as I balance sports on television with a review I should have written a week ago...


"Nick & Norah" barely cost anything to make (it looks low-budget, but not "cheap"), but Sony spent a lot of money marketing the movie, a lot of money trying to sell audiences on the idea that it's "Juno" reincarnated, an idea that would only be perpetuated by the presence of star Michael Cera and, unless I miss my guess, the title font (which Mandate, which produced both films, may have copyrighted).

I'm much more tickled, though, by the idea that somebody in the Sony marketing department said, "Hey, this is a movie with a Jewish undercurrent... Let's release smack in the middle of the Days of Awe!" I just have to believe that *somebody* at Sony was smart enough to know that for a tiny audience, a movie that discusses Tikun Olam would play spectacularly well wedged between Rosh Hashanah and Yom Kippur. In fact, how was that not a targeted piece of marketing? If that movie where Kirk Cameron finds Jesus, quits downloading porn and fights fires can be pushed directly through churches around the country, why didn't my rabbi tell me on Rosh Hashanah that I should see "Nick & Norah" and be prepared to discuss it over rumbling stomachs at Yom Kippur? It would have been an opportunity!

Using Tikun Olam as a framework for a teen romantic comedy is a little bit reductive. The literal translation of the Hebrew phrase means repairing or perfecting the world and there's a higher ideal to its call to do mitzvot (good deeds) than just hooking a pair of kids up on a Friday night. But like Kat Dennings' Norah, I've always been drawn to the idea of Tikun Olam and I'm happy with the idea that a couple dozen people may walk out of the movie and Google the phrase. It's Jewish in origin and it's a bedrock of our faith, but the idea of repairing the world and doing your part to put together the pieces can be totally secular.

It's about healing. And if healing comes via love or via charity or via reviewing movies on a barely read blog... Well, maybe the first two are more important. But if I saved you from going to see "Blindness," well I'll feel like I've done my piece.

"Nick & Norah" is about healing as well. On the obvious level, it's about healing the heart of Michael Cera's Nick, broken by Alexis Dziena, an actress who seems desperately in need of a wildly bitchy six-episode arc on "Gossip Girl."

But it may be even more about a kind of urban healing.

NY Mage's Vulture has a good list of the best "One Crazy Night" movies of all time, a list appropriately topped by the coke-fueled urban nightmare of Martin Scorsese's "After Hours." But what "After Hours" was to Gotham in the mid-80s, "Nick & Norah" probably is to 2008's New York City, post-Guiliani, but also post-9/11. It's a kinder, softer, less scary city. If "Cloverfield" was about young people moving through New York City in a reenactment of 9/11 chaos and hysteria, "Nick & Norah" is a corrective, a story of young people moving through New York City and rediscovering its pleasures. And yes, I guess that makes Where's Fuzzy the equivalent of the Cloverfield monster, an analogy I'm totally comfortable with. If "Cloverfield" was about the city as a dangerous and potentially tragic place, "Nick & Norah" is all about safety. If "Cloverfield" was about destroying NYC landmarks and exploring paranoia, the NYC of "Nick & Norah" is all Gray's Papaya, trendy nightclubs and cute holiday-themed drag show. It's NYC where a cute drunk teen (Ari Gaynor's Caroline) can stagger around for hours without the risk of mugging or rape and where the homeless people and taxi-cab assholes are all played by familiar castmembers from "Saturday Night Live."

It's not actually a *real* version of New York City, but who cares? It's accompanied by a Mark Mothersbaugh-esque score from Mark Mothersbaugh, so you know it's not supposed to be literal or anything.

Director Peter Sollett did a much more clearer-eyed love song to New York City on his feature debut "Raising Victor Vargas," a film that's about as perfect as the indie youth romance genre gets. Sollett's presence here is actually why I loved "Nick & Norah" to the top of my movie-going pile where otherwise it probably wouldn't have necessarily seemed like a "Dan" kinda movie.

I may be dwelling a bit on the "Love song to New York" aspect of the movie because Nick and Norah don't actually have all that much chemistry. Playing the latest variation on the Michael Cera Arrested Adolescent, Cera offers few new shadings, though he has a unique ability to deadpan and disarm the clunkiest pieces of Lorene Scarfaria's dialogue. There are things that Nick is forced to say that no actor could have pulled off in earnest and that Cera gets away with. Even moreso than his characters in "Juno" and "Superbad," though, there are questions as to what this guy is doing that makes him so darned irresistible to women who look like Dziena and Dennings.

I love that somebody has given Dennings the chance to carry a movie, because she's incredibly appealing. But she's of a type that doesn't usually get to play the romantic lead. I'd think of her as a curvier version of Lizzy Caplan, which is to say that she says everything with a bit of a sneer or an eye-roll, with a beyond-her-years resignation. Just as Caplan has been ghettoized as the snarky sister or friend on TV dramedies, Dennings could have gone down the same road. Heck, she could still end up going down that road, which wouldn't be such a bad thing. "Nick & Norah" is her show.

Comparisons to "Juno" aside, "Nick & Norah" is actually an odd blending of the Judd Apatow and Hayden Schlossberg/Jon Hurwitz ("Harold & Kumar") universes. It just makes sense that Apatovian veterans like Dennings, Cera, Kevin Corrigan and Jay Baruchel would be sharing the screen with folks like John Cho and Eddie Kaye Thomas. It's a predictable, but well-populated supporting universe.

A last issue involves the supposedly infinite playlist of the movie's title. "Nick & Norah" has a ton of songs on the soundtrack and characters are frequently talking music, either about their own bands or real bands. But is this one of those situations where you say "Well music is really like another character in the movie"? I'm less sure. While there were things on the soundtrack that I liked, I haven't rushed onto iTunes and downloaded everything from the artists featured or mentioned in the movie. I kinda think that's one of the things a movie like this ought to do.

And now, I must go back to yelling at the little sport-playing men on my TV...