'Mr. Robot' and 'Enlightened': Alienation and Changing the World 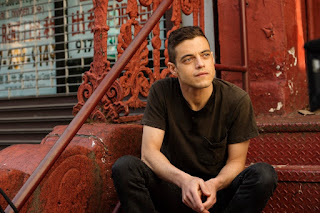 Created by TV newbie Sam Esmail, "Mr. Robot" is the first USA show that I've stuck with for a full season since "Political Animals," if you count that as a series. If you take "Political Animals" as a miniseries, I haven't completed a season of a USA show since the penultimate season of "Burn Notice."

But merely being interested in and sometimes appreciative of "Mr. Robot" apparently isn't enough. I like "Mr. Robot" and can't speak highly enough of Rami Malek's lead performance, but I remain distanced from the show and unable to be as impressed with the show as it often seems to be with itself. But I'm in the minority here and friends, colleagues and loved ones have been impressed enough for two of me, filling the summer months with waves of adulation for "Mr. Robot," celebrating the things it does that are apparently innovative and paradigm shifting. This Slate story -- the headline, actually and not the story itself -- raves that in Malek's Elliot, "Mr. Robot" has created "the new TV archetype of the alienated hero." That's clickbait-y headline-writing hyperbole and not the perfectly well-reasoned argument of the article itself.

The "alienated hero" isn't a new archetype on TV or in any other form of storytelling and separating the alienated hero from the anti-hero is a false differentiation. Tony Soprano is a Golden Age Anti-Hero. He's also entirely an alienated hero, battling depression and insecurities that put him at odds with the masculine ideals perpetuated by the men involved in That Thing of Ours. "The Sopranos" is an entire series about Tony trying to get well enough to reassimilate into a subculture in which assimilation often means death. If you think that the ending of "The Sopranos" is the death of Tony Soprano, it can be read that Tony's "death" comes after an episode devoid of Dr. Melfi, an episode in which he stands in his backyard in quiet repose, free from the ducks that were quacking in his head. Alienated heroes can be anti-heroes and vice versa and the Venn Diagram of the two contains all the overlap you'd ever want.

In praising "Mr. Robot," there's been much talk of its uniqueness, accompanied by many lengthy lists of comparisons. But nobody's comparing it to the one show I want people to compare it to, so I have to get this on the record, even if I don't have time to finish or revise this blog post in the way I'd like to.

Because when I think of stories about an alienated hero battling mental illness and joining with a group of computer-using misfits to bring down a monolithic industrial conglomerate using stolen documentation and the power of cyber-connectivity...

If this post does nothing else, it should just get you thinking about how great a conversation would be between Rami Malek's Elliot and Laura Dern's Amy Jellicoe or, better yet, a conversation composed of dueling unreliable voiceover narrators, one plagued by daddy issues and the other by mommy problems.

If I asked you whose voiceover declared "Some days you feel like the world is against you. And everyone around you seems so mean. And Ugly. There are times I just burn with hate. In those times, I am ugly too," you might be hesitant to commit to ascribing it to Elliot or Amy.

Haunted by his father's death and driven simultaneously by what we're initially led to believe is something on the autism spectrum, but which probably is much more complicated and serious, Elliot is an outsider who can't understand the world around him on an emotional level, but is able to relate through the empirical data gleaned from hacking and through a poorly managed addiction to morphine. The more information he has about the people around him, the more he thinks he's able to understand them, or at least program their responses to allow him to fit in as much as he wants to or needs to. He works for a cyber security firm with the ultimately ironic name of AllSafe, a firm with other clients, but a total economic reliance on E Corp. Elliot sees a psychiatrist, but she's more useful at making him ideally want to be a healthier person than actually helping him. He ultimately determines that if he can't necessarily be better, he can use his particular pathology to briefly fight crime -- Remember when he brought down that pedophile in the pilot, but hasn't done anything similar since? -- and eventually to bring down Evil Corp from within.

"You're angry at everyone... at society," Elliot's shrink tells him.

The quote above comes, of course, from Amy Jellicoe and not from Elliot. You know that, because it's followed immediately by "I don't want to hate. I want to be kind, and wake in the kindness of others."

Haunted by a presumably living, but ostensibly withholding mother, Amy Jellicoe begins "Enlightened" by having a mental breakdown in the workplace and she returns a seeming adherent to a New Age-y philosophy she learned at a rehabilitation program in Hawaii. Unlike Elliot, Amy isn't satisfied with doing good. She wants to BE good. Unfortunately, being good accomplishes very little, because ordinary people, who contain a multitude of good and a modicum and bad, are freaked out by Amy's intensity, an intensity that manifests outwardly in all of the ways that Elliot's intensity is directed inwardly. Unable to convince people around her to follow her path of wellness, to latch on to her therapeutic philosophy, Amy finds a target in Abaddonn Industries, a company with its tentacles in nearly as many nefarious pots as Evil Corp. Like Elliot, Amy discovers that she can't make the world better one person at a time, so she decides to excise a source of wickedness.

In both shows, our alienated heroes realize that the magic of 21st Century life is that where once loners and pariahs had to wallow in isolation, the Internet and virtual connectivity are either proxies or placebos for the real world connectivity they either crave or ache for.

Elliot is brilliant, a master of the new frontier. His expertise allows him to see the power of technology and probably leaves him clear-headed about its darkness.

Amy is not. The Season 2 arc that pushed Amy Jellicoe onto Twitter gave her a glimpse at the power of technology, but true to her base psychology, she's an optimist.

"I have joined the new world. I learn its language, clicking and flashing and pinging. I read its signs. Electric, invisible. In this world, the meek like me will finally rise, and the confused will become certain, and the powerful will be laid low," Amy says in a statement that Elliot would probably agree with and also mock for its naiveté.

Viewers are meant to find discomfort in both Amy's optimism and Elliot's pessimism. How heroic you find either of them or both of them probably depends on your perspective. Does Elliot's proficiency free him from the Don Quixote-esque windmill-tilting that plagues Amy? As counter-measures against depression go, is Amy's construction of an alternate self more or less progressive than the alternate self Elliot constructs? Whose transformation makes them more alone?

On "Mr. Robot," other characters don't really exist, either literally or figuratively. It's part of the gimmick of the show and its distanced point-of-view, but it's also part of what has distanced me from the show. I care about Darlene for the sole reason that Carly Chaikin was Dalia on "Suburgatory," but other than that differentiating factor, I'd probably invest as much interest in her as I have in Mobley or Trento or any of the other fsociety members whose names I had to look up on the show's Wikipedia page.

I don't exactly care about Martin Wallstrom's Tyrell Wellick, but I'm at least interested in his ever-evolving and increasingly horrible and perverse attempts to rise to the top. Perhaps the most enticing part of the show's depiction of Tyrell is that, at least so far as I can tell, he's just horrible at what he's doing. He's a villain here, but in a different show, he'd be the more conventional anti-hero of the type dating back to somebody like the hero on "Profit" or more recently to Kevin Spacey's far more effectively Machiavellian Frank Underwood. Or maybe Tyrell isn't even the villain in "Mr. Robot," because his interactions with Elliot have been negligible. He's been the focus of his own series in which he's managed to mis-read and mis-manipulate nearly every situation. He was introduced as an enfant terrible to equal Elliot, but whereas Elliot's mental illness has actually been a boon in progressing his mission forward, Tyrell has played a game of chess that is perhaps meant to expose the dangers of being that particular kind of super-villain without any understanding of human nature. The whole show is about why Elliot's troubled relationship with empathy and compassion make him a challenging hero, but I wonder if it's even more confrontational and substantive to do a show challenging the notion that villainy has a foundation in misanthropy. Might I prefer to ditch Elliot entirely and just watch a show called "Tyrell Wellick: The Man Who Wasn't Very Good At Takeovers"? Yes. Doubly yes, since that show would probably feature much, much, much more of Stephanie Corneliussen's Joanna. It's neither ironic nor coincidental that the "Mr. Robot" character with the most internal life was the character harboring an internal life. It's just one of those things. I want more Joanna and if Season 2 doesn't deliver that to me, I may need to mutiny.

The supporting characters on "Mr. Robot" have been so spiritually waifish that once the entire world guessed that Christian Slater's character existed only in Elliot's mind -- a thing EVERYBODY guessed by the end of the pilot -- a popular theory sprung up that none of the supporting characters existed and that they were all figments of Elliot's imagination/illness/delusion/whatever. With the exception of my aforementioned spinoff/alt-series, it's impossible to imagine most of the characters on "Mr. Robot" having external lives that aren't featured on the show. The supporting characters exist as functions of Elliot's insularity. I see how this thematically works, but it's a limitation for me. It needn't bother you at all.

In contrast, Mike White endeavored aggressively to show that even if Amy Jellicoe's story was the story of "Enlightened," that there existed a whole universe of supporting characters whose lives were as much a part of the show's core theme as Amy's life was. Amy's life was the novel, but in two seasons, Diane Ladd's Helen, Luke Wilson's Levi and White's own Tyler all got showcase episodes that functioned as companion short stories. [Mike White's Tyler, presented as a computer expert in "Enlightened" by virtue of knowing more about computers than Amy is actually a great counter-point to Elliot himself. Mike White and Rami Malek have different kinds of puppy dog eyes, but I see similarities, window-to-the-soul-wise.] Amy Jellicoe was often alone, but she was alone in a world of like-minded individuals, forming a cohesive and literary community. Elliot is alone in a world of automatons.

This isn't finding fault in one or the other, just pointing to a distinction of worldview.

And this post isn't meant as a "Why I loved 'Enlightened' and feel cold toward 'Mr. Robot'" dissertation.

I've just been thinking of "Mr. Robot" and "Enlightened" as unlikely Siamese twins for a while and if nobody else was going to reconnect them, I wanted to.

And now I have. [I've left a lot of thoughts on the table, but as I near 2000 words and as the finale of "Mr. Robot" looms, it's either truncate this and post it or run the risk it'll disappear entirely. I've opted for the former.]
Tweet

Posted by Daniel Fienberg at 3:36 PM