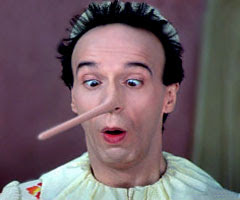 This year's survey? True to form, we're on to best actor! I look forward to the period 15 years from now when we can finally tear into the best and worst sound editing Oscar winners.

On the surface, this is probably the easiest of the surveys to date. Roberto Benigni's win for "Life Is Beautiful" is an embarrassment from which the Academy will never fully recover. His isn't just the worst performance ever given a best actor Oscar, it's the worst acting performance of any size for any gender ever given an Oscar.

As for the best best actor, even though he won't get my first-place vote, I can't see any circumstance under which Robert DeNiro doesn't win for "Raging Bull." It's more Method than Method. It's METHOd with capitals M-E-T-H-and-O.

Let's just say that I had an easier time with the Worst than the best. That's the sort of guy I am.

If you have opinions of your own, send 'em on to Eddie (contest rules and requirements available here).

Follow through after the bump for my Best 5 and Worst 5.

5) Jimmy Stewart for "The Philadelphia Story." Yes. I know. This won't be a popular vote. I love Jimmy Stewart. I love "The Philadelphia Story." Heck, I love Jimmy Stewart *in* "The Philadelphia Story." I just don't get the prism through which this likeable and charming performance is Oscar-worthy (I also voted for Audrey Hepburn in "Roman Holiday" last year for the exact same reason). Stewart didn't get Oscar nominations for "How the West Was Won," "The Man Who Shot Liberty Valance," "Rear Window" or "Vertigo," but of the five nominations he *did* get, this is the least interesting of his performances and I think this being his Oscar win is almost a disservice to his career legacy. I should also add that Stewart's win here probably came at the expense of the best performance of Henry Fonda's career in "Grapes of Wrath," which led to Fonda taking the 1982 best actor win away from both Burt Lancaster and Warren Beatty. With Oscar, it's a vicious circle. Or a slippery slope.

4) Yul Brynner for "The King and I." In the 1950s and 1960s, movies were getting insecure about their place in the entertainment landscape and the Academy fell into a weird rut attempting to prove its prestige by reaffirming praise on a bunch of Tony-winning performances brought to the big screen with only minor alterations. I quite like Paul Scofield's "A Man for All Seasons" performance. Ditto with Jose Ferrer's "Cyrano" turn. But Brynner and Rex Harrison (for "My Fair Lady") are examples of performances that weren't reformatted very well for the big screen. Brynner barks to the back row of the theater for two hours, which becomes mighty boring, though he and Deborah Kerr do dance very nicely together. Probably the best performance he beat that year was Kirk Douglas for "Lust for Life," though James Dean's work in "Giant" has some fans.

3) Art Carney for "Harry and Tonto." This is what I was talking about when I said that sometimes the worst winners aren't the worst because they're bad (Carney is very touching), but because of who they beat. In this case, Carney took best actor from Jack Nicholson in "Chinatown," Al Pacino in "The Godfather II" and possibly the best performance of Dustin Hoffman's career in "Lenny."

2) Al Pacino for "Scent of a Woman." Much of the blame here probably has to go to director Martin Brest. We all know that Pacino is capable of being understated and magnificent just as surely as he's capable of being bug-eyed and shouty and I think his Col. Frank Slade could have gone either way except that Brest must have kept encouraging him to go bigger... Bigger... BIGGER! This movie is like a greatest hits montage of Pacino's least subtle acting decisions -- the compulsive sneering, the inexplicable line-barking, the eyes that are meant to be both crazy and inexpressive. The win encouraged all of Pacino's worst tendencies -- has he given more than two or three good performances since? -- and rewarded one of our very best actors at his very worst. Plus, it wasn't like Pacino beat a weak field that year. Robert Downey Jr. for "Chaplin," Stephen Rea for "The Crying Game," Denzel for "Malcolm X" and Clint Eastwood for "Unforgiven" all were robbed.

1) Roberto Benigni for "Life Is Beautiful." Something very weird happened to award voters in the winter of 1998. It's one thing that they became entranced by a mediocre Italian comedian and his grossly superficial and sappy Holocaust comedy, but they also became really amused by what said Italian comedian would do if they kept giving him awards. It was like a psychotic babysitter thinking it was cool to give a six-year-old coffee and Pixie Stix knowing that the kid would be the parents' responsibility later. And, best/worst of all, Benigni willingly played monkey to Hollywood's elite, finding new ways of humiliating himself with each new ceremony, much to the ongoing terror of Helen Hunt, who had to keep presenting him with trophies. Meanwhile, Edward Norton ("American History X"), Nick Nolte ("Affliction") and Ian McKellen ("Gods and Monsters") had to keep watching this pea-brained Pagliacci urinate all over what should have been a competitive race just because his mere presence doubtlessly made Jack Nicholson giggle. I'd bet dollars to donuts that none of the people who voted for Benigni bothered to watch his "Pinocchio," but they all should have been strapped to a chair for the full experience -- dubbed and undubbed.

And now on to my much less passionate listing of... 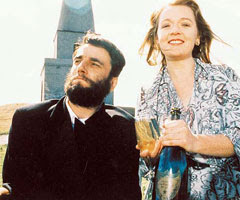 5) James Cagney for "Yankee Doodle Dandy." He sings! He dances! He emotes! He plays a real person! Seriously, how could Oscar voters not swoon? If you could bottle Cagney's energy in this film, you could power a small Midwestern town for a year.

4) Gregory Peck for "To Kill a Mockingbird." No offense to Harper Lee, but the reason why kids have spent 45 years wishing Atticus Finch was their father and why criminal defendants (particularly unjustly accused ones) have spent 45 years wishing Atticus Finch was their lawyer has everything to do with Gregory Peck. Perhaps no actor in history has ever played dignity and righteousness as well as Peck, with his rumbling voice and gentle-yet-fiery eyes. This is one of those performances that you can't imagine being improved upon. Or at least I can't. If not for Peck, my own high school turn as Atticus Finch would probably be the definitive interpretation of the role. My Southern accent was very convincing.

3) Robert DeNiro in "Raging Bull." Just cuz I'm not putting it at No. 1 doesn't mean I don't respect the snot out of this showy piece of acting, much moreso than I respect the overall movie it's in, actually.

2) Marlon Brando for "On the Waterfront." This is a performance that's a bit over-celebrated, to the extent that you can only see the iconic scenes and you often lose the quieter, less famous moments that make the movie. To some degree, Brando at that moment was like Wilt Chamberlain when he averaged 50 points-per-game for a season or Babe Ruth when he was hitting more home runs than most teams. He was simply playing a different game. Look at what Brando was doing and compare him to his Oscar competition that year, people like Bing Crosby for "The Country Girl" and James Mason for "A Star Is Born." It's like a whole other game.

1) Daniel Day-Lewis for "My Left Foot." This is a showy, Oscar-ready role and, pardon my French, Day-Lewis acts the shit out of it.