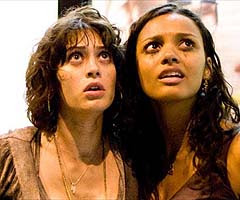 "Cloverfield"
Director: Matt Reeves
Fien Print Rating (Out of 100): 64
In a Nutshell: The first thing that's got to be said is that as "hype-over-substance" movies, "Cloverfield" has a lot more going for itself than, say, "The Blair Witch Project" or "Snakes on a Plane," but it may be lower in its ambitions and aesthetic aims than, say, "Grindhouse."

It's an utter mystery why the "Cloverfield" formula -- cultivate fandom in the J.J. Abrams cult community and paper the world with your ads and trailers -- appears on its way to actually paying big dividends ($16.75 million opening day), while "Snakes on a Plane" effectively tanked. It may have something to do with the fact that "Snakes on a Plane" had one thing and only one things going for it: The best title ever.

"Cloverfield," in contrast, has a meaningless title, but it's done that one thing that films like "Independence Day" and "Armageddon" were able to do, but duds like the Emmerich "Godzilla" couldn't: It's found its money shot early and milked that sucker for all it was worth. So what that it stole the essence of its money shot from "Planet of the Apes," people respond to iconographic American institutions in peril. We cared before 9/11 and we probably care extra-much now. So that shot of the Statue of Liberty's head bouncing through the street and the poster image of the headless Statue? That's what's made money for "Cloverfield." The online obsessives will take credit, but people who can't even check their e-mail went to go see "Cloverfield" because of the Statue.

I wonder if either audience -- the online obsessives and the ones who just went for the carnage -- is going to be completely satisfied.

More after the bump...


Before talking more about the movie, I have a couple letter perceptual bones to pick...

While there appears to be general and wide-spread confusion as to who Matt Reeves is, in addition to the tangential conviction that he *must* be a pseudonym for J.J. Abrams, I like to periodically mention that back in college, my very first press junket as a semi-journalist was "The Pallbearer," which simultaneously was supposed to be David Schwimmer's big break as a leading man, Gwyneth Paltrow's big break as a romantic leading lady and Michael Vartan's first turn as a prominent supporting player. That was actually two years before Reeves co-created "Felicity" with Abrams and, as a result, I was like the only person on earth who thought of "Felicity" as "The Matt Reeves Show," because I simply had a better idea of who he was. So Matt Reeves is a real person. He directed this movie. It isn't J.J. Abrams' "Cloverfield." J.J. Abrams is one man who gets an awful lot of credit for things he puts his name, but he can't be everywhere doing everything, can he? It's not like he's Jerry Bruckheimer.

Anywho... Next axe to grind.

The number of articles and reviews that I've skimmed referring the "Cloverfield" having a "cast of unknowns." Lizzy Caplan has been a regular on three or four network TV shows. T.J. Miller is currently (sortta) appearing on a network TV show. Odette Yustman is currently starring on a network TV show and Mike Vogel and Jessica Lucas and Mike Vogel have also appeared on multiple TV shows in prominent roles. I have to admit that I didn't remember who Michael Stahl-David was until I glanced at his IMDB bio, but then I went, "Oh yeah. He was Sean on 'The Black Donnellys." But nearly every member of the cast was *completely* known. Unproven? Absolutely. But to my mind, a movie critic who has never seen or heard of the cast members of "Cloverfield" is as bad as a major league beat writer who suddenly looks in left field, sees some new guy and calls him an "unknown," even if he'd been the team's top prospect for four years. Worse, actually, because TV isn't the minor leagues for movies. I'm just saying that audiences might not necessarily know all of the stars of "Cloverfield," but any movie critic who can't identify many of the fresh young faces just isn't doing their due diligence.

And... Next axe to grind. This one transitions into the review.

There are a lot of people ranting about how they would have preferred not to see the monster, that they were disappointed by the reveal. Granted that the monster looks mighty CG-y. But those people are in denial about what the movie actually is. It's a freakin' monster movie. Even "Alien," a movie that's mostly about "The Haunting"-style insinuation and spookiness, shows the freakin' alien. And a lot. And in close-ups. And in full light. There's a way these movies work -- you see a tail, you see a foot, you see the darned monster. While "Cloverfield" is intended as a heavy-handed 9/11 allegory, it's mostly about a giant critter terrorizing New York City. The desire to keep the monster permanently hidden is rooted in some critical desire for "Cloverfield" to be a better movie than it is, for "Cloverfield" to subvert, undermine and play tricks with the monster movie genre. The problem there? "Cloverfield" doesn't think it's better than it is.

After a little time spent establishing the characters -- cute 20-somethings with nebulous careers in Manhattan -- the movie just goes into monster-overdrive. The entire movie is shaky, hand-held jitters, but I think the compositional choices in "Cloverfield" are more thoughtful than in "Blair Witch" insofar as I only occasionally felt like I was confusing "motional sickness" with "actually being uncomfortable with the action on screen." It's still more "disturbing" than "scary" (dunno why everything's in "quotes") and much of that "disturbing" sensibility comes from the grammar-of-terror that we learned from 9/11, the billowing smoke pouring down the Manhattan streets, the teetering Big Apple buildings, the people staggering around covered in soot and ash. It doesn't over-exploit 9/11 and I may have wanted it to do more of that, to spend more time dealing with characters trying to fathom the unfathomable. The "things popping out of the dark" scares just kept reminding me of other, scarier movies like "The Descent" or "The Host."

As you would expect from a cast of "unknowns" (little joke there), the acting isn't exactly RSC-caliber, though several friends have called it awful, which I disagree with. Within the reach of what they were asked do to, I thought Caplan was very good (with her huge eyes, she's like a silent film waif) and Stahl-David was fine as well and I think any lapses by Yustman or Vogel or Lucas were based on what the director and dialogue asked them to do. Drew Goddard, who wrote the script, has written some amazingly clever episodes of "Buffy," "Angel" and "Lost," but he doesn't go for self-referential fun here and the occasional moments of pop culture glibness fall flat.

I understand that the movie is about a giant critter run amuck in Manhattan, so logic can't really be a point of issue, but some things were tough to swallow. The explanation for why the cameraman remains so carefully attuned to his cinematic project becomes more and more ridiculous as the stakes escalate and the idea that his friends and various military types keep tolerating his seemed weird. Also, even in the confines of the narrative, the rescue mission that the core characters undertake becomes less and less plausible every step of the way.

Even at 84 minutes, "Cloverfield" is padded and I wonder if a more "World War Z" tactic of cobbling together footage from a number of different groups of survivors might have made for a better movie. I'm curious how the residents of The Village or Spanish Harlem faced this event and we save countless characters filming either with cameras or cell phones and I think a more diverse assortment of found footage could have enhanced the storytelling and the momentum. Maybe with a bit of additional length, "Cloverfield" might have proved to be the clue-filed "Lost"-style film that a lot of Abrams-ites seem to have been hoping for. As it stands now, they're forced to read an awful lot into very little.

Oh and stick around for the closing credits. Not for the ending audio transmission, which didn't enthrall me at all. Michael Giacchino's "Roar!" overture, the only score in the movie, is like the greatest '70s Disaster Movie/ '60s Monster Movie pastiche ever.