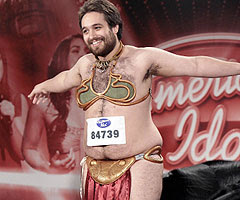 [My apologies, regular blog readers, for the absence of posts in the past couple weeks. Israel plus sickness plus having to feed Zap2it's Guide to American Idol have rendered me a bit swamped. I just wanted to share the tortured analogy with which I began my recap of the "American Idol" series premiere.]

Follow me, dear readers, as I engage in a twisty analogy.

On one hand, they were all, "Ummm... Thanks for holding ground at Leningrad, Stalin. That was mighty heroic and the loss of Russian life really went above and beyond."

On the other hand, there was a healthy sense of "Ummm... Not to sound ungrateful, but if there's any way you could avoid spreading Communism across all of Europe, we'd really appreciate that. But feel free to keep Poland."

That's the way I imagine other network heads are greeting the seventh season of "American Idol."

On one hand, they're all "Ummm... Thanks for keeping anybody at all watching network television in the midst of this strike. You're helping advertisers remember that network TV is still the best way to reach impressionable eyeballs."

On the other hand, there's a healthy sense of "Ummm... Not to sound ungrateful, but if you could avoid crushing everything in your path and leaving us all battling for fourth, we'd really appreciate that. But feel free to monopolize Fienberg's time."

In this scenario, Simon Cowell is probably Stalin, "American Idol" is the USSR and that's the best explanation I can give for why, after steadfastly refusing to recap audition episodes for the past five years, I found myself glued to the TV on Tuesday night to watch the best and worst of Philadelphia.

For the rest of my recap and my theory on why Angela Martin may already be an unbeatable force of nature, head over here...
Tweet