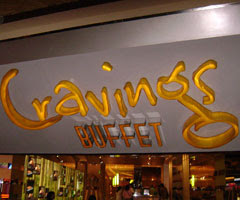 [It's a teensy bit odd that I should have found it easier to be semi-blog-productive while I was in Las Vegas -- albeit relishing the chance to hide out from the 110-degree temperatures in my subpar, but at least vaguely air-conditioned hovel [errr... "hotel"] room -- but I've been back from Vegas for nearly a week now and I've been hesitant to type up the last two buffet reviews from my visit to The Desert. Fortunately, buffets aren't exactly timely, as writing subjects go.

And, as a side note, I strongly recommend the mid-week Vegas experience. It's a little bit quieter, a little bit less chaotic and a little bit cheaper than what happens over the weekend. In addition, my drive back to Los Angeles on Friday after took maybe 4:15, another remarkably smooth, traffic-free jaunt.]

Anyway, my second dinner buffet experience in Las Vegas was... Cravings at The Mirage.

The full review, complete with a couple pretty pictures, is after the bump.

Buffet: Cravings at The Mirage
Price: $24.95
The Line: At 6:30 in the evening on a Thursday, there was absolutely no line to speak of. It took maybe five minutes to pay and get seated. Exiting nearly 90 minutes later -- What? I like to relish my buffet experience! -- a small line had formed, but I'd guess it didn't represent more than maybe 15 minutes of waiting. Given that The Mirage's outpost of California Pizza Kitchen had a formidable line, I'm not sure what to make of it.
Ambiance: Since I started my trip with The Buffet at The Bellagio, it's hard for me not to just compare everything else to that experience on a one-to-one basis. In that respect, Cravings is a much more self-consciously "designed" space. The undulating lights, smooth wooden chairs and clear, amber Lucite tables are all meant to be relaxing and bright and welcoming. The entire space is a rather marked contrast to the darkened interior of the Mirage. All of the smallest details follow the concept, including the ceramic salt-and-pepper shakers, the curved, square plates and even the silverware. I'm not sure how the rather grotesque carpeting fits with the aesthetic, nor the orange, red and brown napkins. But I guess the goal is comfort, however discordant, which isn't bad since Cravings feels much larger than the space taken up by The Buffet and certainly less cramped. An amazing series of stations wrap all the way around the outside, each clearly marked by a light blue or greenish sign explaining either the main food group or the superficial ethnic incarnation. It's easy to target your destination from across a room and head straight there, but I confess that I got disoriented and lost going back to my seat after my first serving.

The Food: Every station I went to at Cravings was a mixed bag, which isn't necessarily a bad thing. I found lots of great things to eat, but also some less inspired entries. 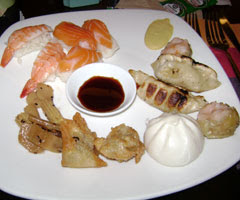 At the sushi station, I wasn't inspired by the variety. The California rolls with crab were fine, but the shrimp was oddly subpar given that perfectly fine shrimp were available in the cold seafood line next to the crab legs. But the salmon rolls featured fish that was both fatty and flavorful. That may have been a freak occurrence, though, since on subsequent trips through the line, the salmon looked drier and poorly cut, as if an entirely different sushi chef with a lower quality of fish had come on duty right at the start of the dinner rush. Color me confused.

Also on the confusion front, I mentioned that the sushi-cut shrimp wasn't very good -- rubbery and tasteless -- but the best item at the well-stocked dim-sum station was a moist shrimp shu mai. Even though they were freshly poured into the heating pan, pork pot stickers were dry and even a liberal dosing of soy sauce did nothing to bring them back. A wide selection of steamed buns looked promising, but they were confusingly labeled and even three requested attempts to land a BBQ pork bun left me with only seafood. Is anything in all the world more disappointing than biting into a piping hot bao and getting the wrong filling? Yes. Many things are far more disappointing. But that still sucks. The dim sum station also offered roast duck which, as those who know me know, is always a favorite. Unfortunately, the duck was pre-prepared in a drawer under the grill and the skim was less crispy than greasy. There. That's one thing that's at least as disappointing as mislabeled bao. But it's close.

Sticking with the Asian theme, the prepared dishes were superior to what was offered at The Buffet at Bellagio. The Singapore noodles had a good curried flavor and bountiful shrimp (clearly the sushi station just got last dibs on the cockroaches of the sea). I also got a kick out of the crunchy pork-filled wontons, though they were mostly fried dough and that's a recipe for buffet defeat, so I steered clear of seconds.

I dodged several sections entirely. The Spanish-inflected station was a bit of a disaster, with burnt (or maybe "caramelized" if I'm being generous) plantains fighting for reheating space with some watery fajita chicken. No spell coming off the food suggested anything Cuban, Mexican or even Texan. I wasn't engaged by any of the different kinds of soup, though there were seven or eight different varieties, ranging from a bouillabaisse to chicken rice congee. Based on looks, I think I'd have gone with the congee first. It seemed different. The deli station would be fine, though I dunno who gets deli at a buffet, while a BBQ spread didn't do anything for me. 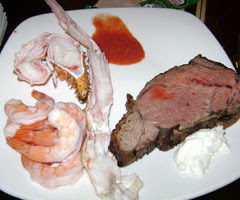 Having skipped the prime rib at the Bellagio, I got a hunk at Cravings. I say "hunk," because the carving wasn't really impressive. At least the meat was properly cooked and except for the tooth-defying ring of gristle, it was decent. Mostly, it tasted like horseradish. End of the day? Prime rib would never make my list of my five or 10 favorite cuts of beef, so I may not be the best person to judge.

I preferred the quality of the crab at Cravings to that at The Bellagio, though when I went by a second time, the legs all looked thinner, with less easily accessible flesh. But the pizza at Cravings was a reminder of how excellent the pizza at The Buffet was, because even though it was baked on-site in visible ovens, my pepperoni slice was basically salty and greasy. 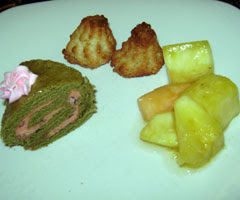 The clear dessert standout at Cravings is the gelato station, which generated a decent line. I'd describe the options as "eclectic," but not especially enticing. You don't see rum babas (with an assortment of sauce options), green tea roulade or papaya soup (an orange sludge in tall shot glasses) just anywhere. I was also impressed with the reduced sugar options, though none -- from a chocolate cake, to a white cake -- actually spoke to me. Strangely, the best dessert I had was a macaroon. Thanks to Passover-based associations, I shy away from macaroons, but these were the right combination of crunchy-chewy on the outside and airy and soft inside.

Bottom Line: If we're just talking food, Cravings isn't as good at Bellagio's The Buffet. But it has many things going for it. The price is lower, the wait is shorter and the space is more open and therefore quieter and less claustrophobic. Both buffets are clear steps above what you get at the cheaper, cut-rate buffets up and down the strip. Next trip? I wanna get to Planet Hollywood and The Rio and to Harrahs. I heard good things about all of them.