My Second Look at "The Dark Knight" 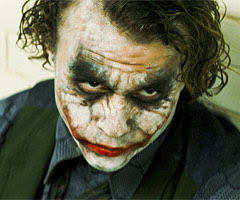 In a Zap2it story yesterday, I wrote about the strong first day for "Pineapple Express" and the likelihood that the three week reign atop the box office for "The Dark Knight" was probably over. I may have been incorrect, as Christopher Nolan's film may have moved into the lead on Friday (there's some disagreement) and will probably make $25+ million again this weekend.

I contributed to that total, plunking down money for the first time to see "The Dark Knight" for a second time (I think that makes sense). I don't usually see movies twice in theaters. On DVD, sure. But I'm not sure I've seen a movie twice in the theaters since "Brick" and "Brokeback Mountain."

I've already given "The Dark Knight" the 2000-word treatment with the basic conclusion that it was the year's best film to date and probably the best comic book movie ever.

Some thoughts on a second viewing are after the bump... Since this isn't a review, I'm going to treat those comments like they're being written for somebody who has seen the movie, so there will be spoilers galore.

So anyway, my thoughts upon revisitation...

It Is What I Thought It Was: I gave "The Dark Knight" an "86" on the Fien Print scale and then had to justify my overall scoring system to at least one commenter. Having rewatched the movie, I'm convinced that my numerical score was *exactly* right. By my scoring system, "The Dark Knight" got what it deserved. Watched for the very purpose of magnifying strengths and weaknesses, "The Dark Knight" is still far-and-away the year's best movie and I'll remove any hesitation I might have had: It's the best comic book movie ever made. Period. End scene.

Heath Ledger May Be Better Than I'd Thought: While there has been moderate backlash very slowly building against "The Dark Knight," beyond one infantile op-ed in the Los Angeles Times suggesting that given him an Oscar nomination would celebrate his lifestyle and send a bad message, nobody has backlashed on Heath Ledger. The performance was actually better than I remembered, with several key scenes standing out even better than before. I love Joker's inferiority complex at his first meeting with the crimelords, specifically when they attempt to minimize him and call him a freak. I could probably watch the Central Booking interrogation scenes on a loop, for his interactions with both Gary Oldman and Batman. And then the whole sequence in the nurse's uniform, culminating in his disappointment and hilarious confusion at the hospital only half-exploding, is both chilling and comedically brilliant. Mentioning those three scenes leaves out Joker's interaction with Bruce Wayne's fund raising friends, his semi-suicidal standoff with the BatCycle and the brilliant throwaway shot of Joker sticking his head out the window of the car escaping central booking.

The Plot Is Tighter Than I Thought: I have at least one friend who has accused me of overhyping the movie in the weeks before its release, leading to disappointment on his part. His main complaint was that the movie's plot is pretty loose and it's mostly just three interlocking character arcs without much of a narrative. I don't think that's true if you assume that The Joker's comment about just being a mad dog chasing a car is as much of a lie as his two, nearly three, different explanations for his scars. I think you have to assume that although the Joker is disappointed in the results of the two barges, everything else in the movie, even when it appears to be a failure for him, is a total success. He obviously wanted Rachel to die, not Dent. He obviously wanted the hospital destroyed more than he wanted the one Wayne Industries worker killed. His whole dalliance with the Mob was just a way to stir up that hornet's nest around Dent, the man poking his hand around the stinging insects. He wanted Dent brought down and Batman brought down to his level, the playing field in Gotham City totally equalized. In that light, with the Joker as a puppetmaster, every aspect of the plot actually builds very consciously. My major concern is that it builds to a third movie that we'll never see, because it builds to a third movie that features The Joker and requires some level of resolution beyond The Joker dangling from a building. I suspect that a third movie could include a computer generated shot of The Joker sitting in Arkham Asylum, but given just how easily escapable Arkham Asylum has always proven to be, it's doubtful that we'd be satisfied with that resolution.

Who Says the Action Scenes Aren't Coherent? One common complaint among the movie's few naysayers is that Christopher Nolan isn't an action director. I can't necessarily argue with that, but I also saw a couple complaints that the action sequences are incoherent, poorly edited together. I'm not sure there. I was never spatially confused for a second rewatching the movie. But no, the movie doesn't live in its action scenes, so much as its set-pieces. There isn't an ultra-memorable fight scene, but there are several memorable extended set-pieces that include action. Again... no real complaints on that front.

Three Things That Don't Fully Work For Me: The movie becomes ultra complex in its second half and some of the twists and turns aren't necessarily as effective as they ought to be.

The Mole in Gordon's Unit: Ramirez is immediately suspect and I hadn't remembered that there are at least two lines of planted dialogue mentioning her ailing mother in the hospital. The logic of her betrayal still falls flat for me, particularly after the confusing scene with Berg, the other cop who has a relative in the hospital. It's unnecessary complication to expect that this random officer would be willing to off Reese, much less that he'd be able to find himself in the car with the guy. So he ends up being both a red herring and yet not a red herring. All it does is makes me scratch my head.

The Two Barges: I get the point of the two barges, both in terms of what the Joker is hoping to do and how the choices on the barges play out dramatically. It still doesn't fully work for me. The sequence takes too long to develop and then the way it develops plays just for simple irony. The upstanding citizens are conflicted, become animals and then chicken out. The convicts are already animals, seem prepared to validate their positions as animals and then the one cross-eyed tattooed convict throws the detonator out the window. Other than irony -- morals where none are expected and immorality where morality would be expected -- is there a reason why the characters make the choices they make? If we had previously met the cross-eyed prisoner in some meaningful way and there was a backstory for his choice, it might play better. Ditto with the civilian who's finally unable to turn the key. Instead? It just doesn't play as well as it should.

Harvey Dent's Fall: There is at least one line of dialogue early in the movie in which the mayor explains to Harvey that his ability to prosecute the mobsters hangs entirely on his moral rectitude and that any indictments he gets might rise or fall on his remaining pure. This over-literalizes the idea that Gotham City has its Dark Knight, but also needs its White Knight. I think I might have liked to see just a little bit more on what Dent means to the city versus what Batman means and why it's so essential that Batman takes the fall to prevent the sullying of Dent's image. As it stands, the blood on Dent's hands isn't quite dark enough for me. He killed a couple crooked cops and the driver for a mob boss? That's not so bad. He goes that extra step too far putting Gordon's family in jeopardy, but I don't see why a selective truth wasn't an alternative. What I'm saying is that Dent's fall is far, but not far enough for it to send Batman off into exile.

Oscars? Ledger's nomination seems like a foregone conclusion. Again, I'm not going to predict a win with four months of movies still to come, but he's the frontrunner. Figure the movie for a slew of technical nominations -- editing, cinematography, two sound editing categories, etc. It's my opinion, one I've shared with several people, that if "The Dark Knight" passes $500 million at the domestic box office, it will also get a best picture nomination. We would have to have a hell of a high-quality autumn and winter for it not to deserve that honor. Meanwhile, "The Dark Knight" continues to hold down the status as the best movie of all-time, according to IMDB users. That's a little crazy. But we *are* talking about IMDB users here.