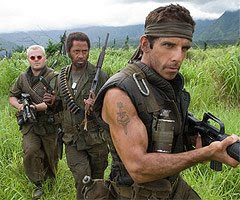 "Tropic Thunder"
Director: Ben Stiller
Fien Print Rating (Out of 100): 64
In a Nutshell: When critics are raving that "'Tropic Thunder' is the best comedy of the year!!!!" what are the really saying? Are they saying that Ben Stiller's Hollywood-action-satire is a fantastic comedy or are the complaining that the year's comedic pickings have been so slow and so unimpressive that *this* is what we've resorted to calling the year's best comedy?

If it's the latter, I can't necessarily disagree. I mean, I preferred "Pineapple Express," but that's sort of a personal preference and I'd acknowledge that I probably laughed out loud many more times at "Tropic Thunder." But, if I'm being completely honest, I've been so starved for big screen laughs that I found prolonged moments of pleasure watching the remarkable Anna Faris strut her stuff in the decidedly less-than-remarkable "The House Bunny."

But that doesn't mean that I'm not already getting the strong sense that "Tropic Thunder" is on the verge of being the most overrated, overhyped comedy in some time. But that's not a blurb they'd put on a poster.

The full review -- none of that stinkin' capsule review stuff -- is after the bump...

Don't get me wrong. I'm not prepared to resent "Tropic Thunder" until the hype builds just a bit more. It's nice to see that more than 15 years after the premature cancellation of "The Ben Stiller Show," Ben Stiller has been able to go back to that sketch comedy well. Because "Tropic Thunder" is basically just a 100 minute version of a "Ben Stiller Show" action movie parody skit, expanded with a few fake trailers, a fake commercial and an awful lot of filler. And that filler was obviously so plentiful that the trailers and commercials are full of scenes and dialogue that aren't in the movie. "Tropic Thunder" is probably going to have a heck of a DVD.

The capable cast of stars are going through a series of bits and many of the -- heck, most of them -- are tremendously funny. The movie sets itself up perfectly with spot-on parody trailers for three movies featuring the stars of movie-within-a-movie "Tropic Thunder." Ben Stiller is the action guy, whose franchise has suffered from diminishing returns in its seventh installment. Jack Black is the low-brow comic promoting a makeup-heavy fart-driven comedy and Robert Downey Jr. is basically Russell Crowe, a temperamental Aussie Actor gunning for Oscar recognition in a movie about forbidden love.

What kind of movie is "Tropic Thunder" (the movie within the movie)? I'm not really sure. It's based on a best-selling war memoir by a crazed no-handed veteran (Nick Nolte, flawless cast), but it's being directed by an incompetent dolt (an amusing Steve Coogan) and micromanaged by Tom Cruise's bald, fat studio chief. As director and co-writer, Ben Stiller never commits to the aspirations of the meta-"Tropic Thunder." Are they making a bad movie? Are they making a movie they know is a bad movie? Do they think they're making a good movie, but it's a bad movie? The reverse? I have no idea. Because the movie-within-a-movie lacks focus, "Tropic Thunder" begins to lack focus when the movie becomes real for the actors. Stiller and fellow screenwriters Justin Therous and Etan Cohen are so invested in mocking the generic action movie that you want the overall picture to be a bit more self-aware when it becomes a generic action movie in and of itself.

"Tropic Thunder" absolutely has Hollywood's number, capturing the superficiality of the entertainment industry and its stars, poking fun at the illusions produced by the dream factory. "Tropic Thunder" has its pulse on Hollywood in a way that few fictional productions have, assuming you somehow haven't watched "Action," "Gross Pointe," "The Larry Sanders Show," "Singing in the Rain," "Network," "My Favorite Year" or several dozen industry satires. Hollywood likes laughing at itself, seemingly content that audiences outside of New York and Los Angeles don't actually give a shit about the behind-the-scenes machinations at the sausage plant.

Because of a well-crafted trailer and a group of A-list stars, "Tropic Thunder" is likely to be more successful than many of its inside baseball predecessors. The movie's been marketed broadly, so broadly that some audiences might not even know what they're laughing at. Is it enough to find it funny that Downey is playing a character playing a black character? For some viewers, it will be. Is it enough to find it funny to watch Jack Black twitch his way through drug withdrawal? For some viewers it will be. And Ben Stiller going native? Funny. Ben Stiller playing a mentally handicapped character? Well, for some viewers, that'll just be funny all on its own. Those are the viewers, incidentally, who advocates for the mentally handicapped are concerned about.

How much to most moviegoers actually care about the hilarity of an agent freaking out that his most important contract rider wasn't being fulfilled? How many viewers will be able to spot the eight or 10 different suits/producers/agents Cruise seems to be channeling? And as smart and self-aware as it is for Downey to lecture Stiller on how if you want an Oscar, you never go "full retard," how many casual viewers will be going through their favorite disabled Oscar-winners and how many will just be giggling at the use of the word "retard"? I'm not sure.

At every point, "Tropic Thunder" settles for finding laughs on the surface and turns away from making any sort of more challenging statement.

Take the Robert Downey Jr. character. Here's a guy who's in black-face for almost the entire movie. Is it racist? Heck no, because the joke is on the character and the absurdness and the superficiality of his gesture. But is there any sort of meaningful commentary on Hollywood's overall treatment of race? For all intents and purposes, the black character Downey's character is playing is a shameful stereotype and would be whether he was played by a white guy or Denzel Washington. But Brandon T. Jackson's Alpa Chino is only upset about the black-face and not in an interesting way, just in a "You're not black" way. Downey's character and the black-face could have been a gateway for all sorts of exploration of the functioning of an industry that would rather employ an Aussie actor in black-face than a strong black man. But no. Nothing. I might, in fact, have liked a plausible explanation for why Downey's character would have wanted this role in the first place other than the opportunity to play black.

And what about Stiller's "Simple Jack." Should it be taken as an affront on the mentally challenged? Heck no. The joke is completely at the expense of a brain-dead actor who sees this sort of broad and embarrassing characterization as his path to Oscar glory. But he doesn't get his Oscar and the movie fails. His decision is mocked and negatively sanctioned at every turn and the only people who are fans of "Simple Jack" are the isolated drug cartel who don't have access to any other movies. But as apt as Downey's lengthy speech about going "full retard" may be, it's just a rehashing of a joke that award-spotters -- they're a cottage industry out here -- have been making for years. There isn't a bold statement or a perceptive commentary being made.

You know who *should* probably be offended? Asians. The film's drug pushing villains are just out-of-nowhere caricatures. I think there was a way to actually handle the characters within the realm of parody. If, for example, the adversaries were mountain men who thought for some reason that they were still at war with the United States, then you could say that they were meant to mock the way Hollywood productions have traditionally treated the Vietnamese characters in Vietnam movies. I guess we're supposed to think they're even broader versions of the sort of Asian baddies Rambo or Chuck Norris used to dispatch, but again, it's a commentary on a genre that's been out-of-fashion for 15 years.

With the main actors, there's a certain familiarity from two of the three leads, which takes away from the pleasure. While obviously Ben Stiller has probably been considered too short and too Semitic to be an action lead, but he's played the blustery Alpha Male enough times that there are few surprises to how he plays Tugg Speedman. Similarly, Jack Black does the sort of even more uncomfortably intense Chris Farley thing that he does in his less subtle roles. I happen to like Black more when he underplays, but that doesn't mean that viewers won't love his character here. In fact, viewers will probably be content with the familiarity that both Stiller and Black bring to the table.

But I almost never found myself watching Black and Stiller. Forget the silly people suggesting he might be up for an Oscar for this performance. Downey is just having a lark here, as he -- an occasionally over-mannered actor himself at times -- has to imagine the way an Australian would imagine an African-American would look and sound. There are several scenes where I swear Downey breaks character and seems to giggle at what he's getting away with, but he's so good that you can't decide if he's breaking character as Downey or as Kirk Lazarus.

The other person who will be generating buzz out of the movie is Tom Cruise, whose part will eventually become central to the ad campaign, or at least as much of the part as they can show. I've seen several of the more zealous over-praisers try claiming that Cruise is unrecognizable. That's ridiculous. You never forget you're watching the former biggest movie star in the world in a bald-cap and a fat suit. What's important for Cruise is that you forget that the media has been training you to dislike and even fear Tom Cruise in recent years. He's in on the movie's joke and his engagement is infectious. Cruise's role is being presented as a cameo, but it's a pretty full-fledged supporting role. He's a contributor.

The movie I guess I wanted "Tropic Thunder" to be is Richard Rush's
"The Stunt Man," a satire of Hollywood so bitter and black that it still feels ahead of its time. For some reason, "The Stunt Man" is a relatively lost classic, but I'd urge readers to check out the DVD. "The Stunt Man" is funny. It's inside baseball. It's got one of Peter O'Toole's very best performances. And it has a lot to say about the movies, things that are still true, things that are more current than anything in "Tropic Thunder."