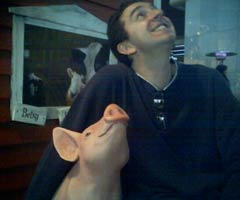 "Charlotte's Web"
Director: Gary Winick
Fien Print Rating: A sentimental and *generous* 60
In a Nutshell: To really and truly know me, you need know only two things: The Red Sox's current absence of quality late-inning relief pitching is keeping me up at nights and I love movies featuring talking pigs. Take a couple seconds to parse that and get back to me.

That's why when it became too late to catch the showing of "Babel" that I'd hoped to make tonight (no comment), I dispatched with the other unseen suspects -- Leo whining about diamonds, 50 Cent whining about Iraq, Eragon whining about the difficulties of riding a dragon -- and opted for "Charlotte's Web."

My simple, short and superficial reaction is that it's a painlessly cute movie, one that kids should enjoy and that adults should tolerate provided they have sufficient nostalgia for the E.B. White classic, or a sufficient taste for talking pigs. My Favorite Martian Dakota Fanning provides solid human support to the strong voice cast lead by Julia Roberts, who makes a maternal and nurturing Charlotte, and Steve Buscemi's Templeton the Rat, who may not be Paul Lynde, but who is? Pushed forward by a Rachel Portman-esque Danny Elfman score (which is to same hammy, magically and literary, but almost understated by Elfman standards), the movie builds to many of the right emotional notes.

My shorter and simpler reaction: "Babe" is a magnificent movie, perhaps the greatest ever made for kids and "Charlotte's Web" is unavoidably in its shadow. Heck, while Charlotte's Web" may be twice as good as "Gordy," it's no "Babe: Pig in the City" either.

From "Tadpole" to "13 Going on 30," Gary Winick has proven himself to be amongst the least visual of mainstream directors, so if visual magic was necessary to make "Charlotte's Web" a big screen classic, then the failings are Winick's. How many shots are static, without any point of view or perspective? More than I'd care to count. And the animals? They rarely move and they look either animatronic or drugged, rarely real. The visual effects are never transparent and the straight forward computer animated stuff -- Charlotte in particular -- is better than the integration of actual animals and effects, especially since the art of animal lip-flap (making critters look conversational) hasn't improved at all in the past decade.

And last and probably least for the evening, it's disturbing that Dakota Fanning has been given a love interest in the movie. She's not yet at the point where I'm prepared to see her as a human, much less as a human of necessary romancin' age.
Tweet