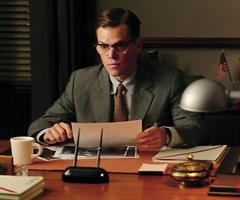 "The Good Shepherd"
Director: Robert DeNiro
Fien Print Rating (Out of 100): 73
In a Nutshell: Back after 10 exhausting days in Europe, which forced the New Year's Eve question of "If there are a dozen movies I want to go see and my filmgoing partner of the afternoon won't want to see the tearjerking underdog sports movies I wanna see -- Sorry, "Rocky 6" and "We Are Marshall" -- and I'm too darned jet-lagged to wanna go see a movie that requires reading -- Sorry, "Letters From Iwo Jima" -- or potentially frustrating emotional manipulation -- Sorry, for the 100th time, "Babel" -- what's out there as a compromise?" The answer was Robert DeNiro's second directing effort, a frequently fascinating and textured peek at the early years of the CIA that I was captivated by for around 90 minutes before I tired.

Eric Roth's script does the difficult things very well. It plunges viewers into the world of pre-WWII intellectual privilege -- Yale, Skull & Bones -- and shows how one man, Matt Damon's Edward Wilson, came to develop and launch a prodigious intelligence body. Full of skullduggery, vaguely familiar characters and international intrigue, "The Good Shepherd" has more density and complexity than most films could dream of. It's also a bloated 2-hours-46-minutes and could have been shorter if Roth's script hadn't kept explaining its subtext and over-articulating how Wilson's own life was a prism for the missteps in the CIA. There were a half-dozen times when I thought "Hmmm... I guess I understand how that fits with the films themes" and then waiting two or three minutes to have a character -- too often DeNiro's Gen. Sullivan -- explain those themes in a monologue that would only be necessary if the movie was playing to an audience of monkeys. DeNiro's failure to trust viewers to connect the dots in many crucial scenes probably came about after testing a variety of different cuts of the movie, but it isn't the right result.

I'm also tempted to wonder if "The Good Shepherd" wouldn't have worked better if it had been structured along the "Iris" model and double-cast most of the lead roles, despite the fact that the characters age less than 25 years. Instead, Damon is both the oldest looking Yale Man imaginable and the most boyish 50-year-old on the planet, believable as neither despite a determined and emotionally guarded performance. And Jolie has similarly forfeited the ability to play a coquettish co-ed and her aging matron is full of tics and limps and postural shifts that suggest Jolie will make a poor grandmother indeed.

Couple quick other things: Can it ever be said enough that Alec Baldwin is just about the most valuable supporting actor on Earth? And if he isn't, might Michael Gambon be? And who knew Billy Crudup was so darned British? Or that Keir Dullea was still alive? Or that it would be so nice to see Joe Pesci on the big screen again?

On a side note: I hope to get to a bundle of movies in the next week before Press Tour begins, but with an impending move (next door, so it shouldn't involve huge tsuris) I may not have the chance. I'd still like to remind folks to go see the year's two best movies -- "Pan's Labyrinth" and "Children of Men" when they get to a theater near you. Otherwise, we're just going to be stuck with "Night at the Museum" sequels. Nobody wants that. Oh wait. They do? Sigh.
Tweet