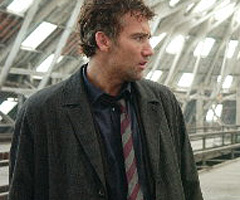 "Children of Men"
Director: Alfonso Cuaron
Fien Print Rating (Out of 100): 87
In a Nutshell: I've got a plane to catch, so this is going to be ultra-brief. Think "Casablanca" meets "The Nativity Story" as written by Philip K. Dick and directed by some unholy spawn of early Stanley Kubrick and Emir Kusturica. If "Pan's Labyrinth" remains the year's signature piece of pure storytelling, "Children of Men" is the year's best piece of feature filmmaking. Some people will complain that it's heavy-handed and they won't necessarily be wrong. It's a fable about hope and government oppression. There'd be no point in it being subtle. The film's first half -- establishing the world of 2027 in which all women have become infertile and humanity is on the verge of collapse -- is very fine, but the second half -- set mostly in a remote Refugee Camp -- is mind-blowing. Cuaron and cinematographer Emmanuel Lubezki have constructed shots of unbearable suspense and stark beauty and Clive Owen is just asked to hold the frame and be a leading man, which he is. The soundtrack -- lots of '60s remakes and originals and a Jarvis Cocker credit song that would make a great Oscar night performance -- is killer and the performances around Owen are strong as well. I imagine that "Children of Men" will be tucked in after "Pan's Labyrinth" on my Top 10. It's a meaty piece of cinema and I look forward to seeing it again.
Tweet