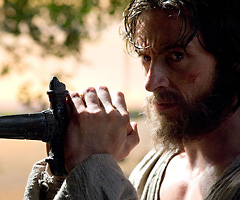 "The Fountain"
Director: Darren Aronofsky
Fien Print Rating (Out of 100): 48 (59 if high)
In a Nutshell: [I saw this one nearly a week ago, but my ambivalence was so great that it took til now for me to feel like writing even the briefest of reviews.]
We were infinitely far into "The Fountain" (for time and space matter not with such ephemeral and negligible narrative) and beautifully lit, temporally and terminally frustrated lovers Hugh Jackman and Rachel Weisz started whispering in each other's ears. "Forever," "Forever," "Forever," they whispered as they floated weightlessly in a snow-globe meant to represent Earth, humanity, life, death, frailty and other nebulous themes. Suddenly it struck me that I wasn't waiting for action or catharsis or for something -- ANYTHING!!!! -- to actually happen. I was waiting to find out what the movie was a commercial for.

"DeBeers' new diamonds... Even if you discover the Tree of Life, they'll last you forever."

Instead, "The Fountain" is a 96-minute piece of product placement that doesn't even have a product to sell, unless you're buying into its crushingly superficial lip service to the ideas of everlasting love, the redemptive and saving possibilities of death and the advantages of animal testing. It's a very sweet, but somewhat sophomoric little mood poem from Aronofsky to the woman he'd impregnate. But it sure isn't deep and it sure isn't profound, because if it were either of those things, I suspect its pretentiousness would have annoyed me. Instead, I invested some time in ogling its technical merits and was neither enthralled nor irked.

Aronofsky is a talented filmmaker and with cinematographer Matthew Libatique, he's crafted imagery so gorgeous that I often found myself frustratedly praying that meaning would arrive to compliment the aesthetic passion. [I won't even complain that Aronofsky consistantly confuses stylistic redundancy with the creation of visual themes, a problem that's plagued all three of his movies.] Certainly the actors are buying into it. Jackman gives his second consecutive sterling performance after his recent turn in "The Prestige," proving once again that the problem with movies like "Swordfish," "Kate & Leopold," "Someone Like You" and "Van Helsing" wasn't the ability of their leading man. He invests Aronofsky's trio of thinly written characters with a wounded and wonder-filled heart. Weisz merely asks Jackman's various characters to fall in love with her, which has to be an easier chore than inhabiting an actual character, particularly if the director has fallen in love with you.

I have no doubt that 10 years from now, "The Fountain" will have a select group of stoners and romantics who think it's a misunderstood masterpiece. They won't be right, but I wouldn't mind partaking in whatever they're smoking.
Tweet