MovieWatch: "The Pursuit of Happyness" 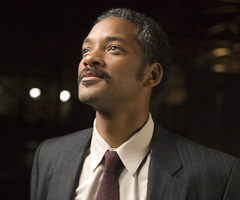 "The Pursuit of Happyness"
Director: Gabriele Muccino
Fien Print Rating: 68
In a Nutshell: The title of "The Pursuit of Happyness" -- or as I'd rather call it "Run, Will Smith, Run" -- has been under scrutiny, with most of the discussion concentrating on the misspelling of "happiness," a typo found on the door of a Chinatown daycare center where Will Smith's Chris Gardner sends his son. Not enough emphasis, I reckon, as been put on the other word in the title, "pursuit," which is really what the movie is about. As Smith's Gardner says early in the movie, the Declaration of Independence makes no promise of happiness. It just suggests that the ability to pursue happiness is an inalienable right.

"Happyness" is actually a good companion piece to the inspirational Disney football drama "Invincible," which I viewed as a surprisingly un-mawkish and dreary glimpse of a Cinderella story that concentrated more on the mire than on the triumphant exit. Directed with a poetically realistic sense of purpose by Gabriele Muccino, "Happyness" offers precious little by way of triumph until its conclusion, which is bound to surprise a lot of viewers excepting something more Hollywood, more consistently uplifting. Perhaps the least shocking thing about the film is that it was scripted by Steve Conrad, whose "The Weather Man" was as complicatedly depressing a film as any major studio has released in recent memory. He was brought on here, no doubt, to keep "Happyness" from wallowing in sentimentality and it mostly doesn't.

Instead, it becomes a litany of the misfortunes that befall Garner on his journey from homelessness to millionaire success as a stock broker. There are at least a half dozen sequences of Smith sprinting away from angry cabbies, sprinting after people who stole his bone density machines and sprinting toward business meetings that he may or may not ever make. And the gloominess does, rapidly, become redundant and, in that redundancy, it becomes distasteful. In fact, if *any* other actor had played Gardner, the movie would have collapsed under the weight of its discontent, but Smith shoulders all of his character's burdens and with them the weight of the whole movie. Casting Smith's son Jaden as Gardener's son was a stroke of absolutely genius because of the movie is all cold visuals and numbing disappointments, the warmth between father and son -- the heart of the story -- can't be faked. Frankly, they should have cast Jada Pinkett Smith as Gardner's bitter, abandoning wife, because poor Thandie Newton gets engulfed by the thankless and distasteful part. I think they could have trimmed about 10 minutes worth of Thandie's shrill harpie and the movie wouldn't have lost a thing.

I don't know if I'm conveying well enough why I liked the movie beyond Smith's performance, but I guess I felt like by the end, Muccino and Smith had mostly earned the misty eyes and sniffles that filled the theater. That being said? No interest in seeing this one again at any point.
Tweet