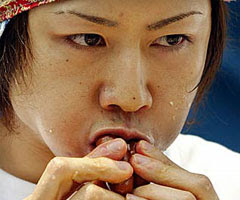 Two worlds collide, rival nations
It's a primitive clash, venting years of frustrations
Bravely we hope against all hope, there is so much at stake
Seems our freedom's up against the ropes
Does the crowd understand?
Is it a East vs. West, or man against man
Can any nation stand alone?

Oh Survivor! Once again you've perfectly articulated and anticipated one of history's great events. They were singing, of course, about the classic exhibition boxing match between Rocky "The Italian Stallion" Balboa and Ivan "Captain Ivan" Drago, a showdown that managed to singlehandedly avenge the tragic demise of Apollo Creed, but also to end Communism as we know it. I've always been frustrated hearing conservatives rave about how Ronald Reagan was responsible for the fall of socialism across Europe, but he never faced off against a Soviet-designed Russian killing machine like Drago. But it turned out that Drago wasn't, in fact, a machine. He was just a man. And Drago discovered that Rocky wasn't just a man. He was made of iron. Rocky may have won the fight, but the world won the war.

As the Stallion put it, "During this fight, I've seen a lot of changing, in the way you feel about me, and in the way I feel about you. In here, there were two guys killing each other, but I guess that's better than twenty million. I guess what I'm trying to say, is that if I can change, and you can change, everybody can change!"

Follow through after the bump if you're still confused about what I'm blathering about.

The great thing about the Drago-Balboa bout was that the Russian crowd and the TV audience at home got their money's worth. Some of the pundits had figured that Balboa would go down early, that the long the fight lasted the more likely it would be that Balboa would leave the USSR in a body bag. Years later, of course, we learned that the brain damage Rocky sustained in the fight would effectively end his boxing career, but in that moment, two great warriors from two rival nations learned an important lesson about mutual respect.

Remember back in the early '90s when the Japanese were about to take over America? They were buying our businesses and our golf courses. Pundits were saying that in no time at all, we'd all have to learn to speak Japanese to talk to our new overlords, which was going to be extra-complicated, since everybody knows that Americans can barely speak English, much less any other foreign language. The discourse was so heated that Michael Crichton could write a disgustingly bigoted and fetishistic novel like "Rising Sun" and sell millions. Ah, the reign of King George I. Good times.

Those doomsday predictions didn't come true, which was the only thing that drained drama from Wednesday's hot dog showdown between Joey Chestnut and six-time defending champ Takeru Kobayashi, a match-up that couldn't have been better scripted if Sylvester Stallone wrote the darned thing himself. First Chestnut broke Kobayashi's storied mark last month at a qualifier, eating 59.5 hot dogs in 12 minutes. Then, in the weeks leading up the the 4th of July, Kobayashi complained of jaw problems and threatened to back out. First his complaint was a broken jaw, then painful wisdom teeth, then arthritis of the jaw. Was he ducking Chestnut or just raising the stakes, lulling his rival into a false sense of security. Then, at this morning's event, while Chestnut arrived on a bus with the other gurgitators, Kobayashi showed up in his own limo, surrounded by bodyguards. Boo! Boo!

Like Balboa and Drago, though, Kobayashi and Chestnut weren't just about the pre-fight drama, about the build-up and the competition lived up to all advance billing.

Chestnut, whose eating style is characterized by making big balls of his food, like a toddler, and ramming it down his throat while jiggling and bumping his stomach to clear space, got off to a fast start and it looked like Kobayashi was truly out of shape. For a while it looked like another competitor -- possibly mohawked Pat Bertoletti or the face-painted Eater X -- might sneak up and steal second. But as Survivor also sang, "In the warrior's code, there's no surrender/ Though his body says stop, his spirit cries 'Never!'" They were singing of Kobayashi. Although he was three or four or even five wieners down through the first three minutes, as the clock counted down, he pulled close. First Chestnut smashed the old meet (meat?) record of 53-plus dogs. Then, with Kobayashi breathing his hot doggy breath down his neck, Chestnut passed 60 and shattered the world mark. At 61 and 62, the two eaters were basically tied. At 63, though, as Chestnut plowed on, Kobayashi suffered the ultimate indignity -- a partially reversal of fortune. From his mouth and nose spewed a slurry of half-eaten franks, a feat caught in tummy-churning slow motion, very much like a slo-mo shot of Balboa's glove displacing Drago's cheeks, sending a spray of spit and sweat into the Russian air. 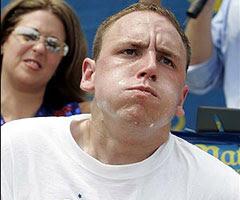 When the hot dog detritus had cleared, Chestnut's achievement was evident. With 66 dogs devoured, he'd set a new world mark. Despite the reversal of fortune, Kobayashi was still credited with 63 dogs, a personal best. The next closest competitor, was well-back with 40-something.

Yes, the hot dog eating crown and its mustard-yellow victor jacket are back in American hands, just like so many of our golf courses. Michael Crichton isn't likely to write a "Rising Sun 2" any time soon. But should we learn a lesson of American superiority from this gustatory delight? No. Alone, neither Chestnut nor Kobayashi could ever have reached such great heights.

I guess what I'm trying to say here is that if Joey Chestnut can eat and Kobayashi can eat, everybody can eat!