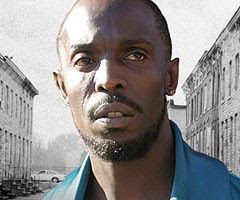 Here's a fun little game if you want to know why I can't bring myself to care about the Emmys: I want you to go to the official nomination page and do a word search for either "The Wire" and "Wire."

See? Wasn't that fun? So much for the Emmys, eh?

If, of course, you still care about an organization that last year lauded Ellen Burstyn for 20 seconds of screentime and a bad accent, follow through after the bump for a typical amount of ranting and raving...

Hugh Laurie's failure to secure a best actor nomination last season was one of the more peculiar gaffes in recent Emmy memory. Even if "House" occasionally stumbled this year, particularly in the arc featuring David Morse (somehow Emmy nominated for that work), Laurie's work never faltered and in addition to playing his usual cycles of drug addition and misanthropy, he had fantastic arcs of internal conflict as well.

I'm glad to see the Academy finally understanding that Steve Carell's work on the office isn't being done in a vacuum. Rainn Wilson was an obvious and deserving supporting nominee -- yes he plays his part to the back of the auditorium, but that's exactly what a supporting performance is supposed to be. And Jenna Fischer deserves to win purely for her five second reaction shot at the end of the finale. Maybe next year John Krasinski and Melora Hardin can get their nominations?

I'm even happier to see Neil Patrick Harris get his due for his "How I Met Your Mother" work. This feels like a gateway nomination to perhaps get overall acceptance of the show next year? It's still a shame that Kourtney Kang couldn't get a nomination for "Slap Bet," the season's best overall piece of traditional comedy writing.

Somehow Mary-Louise Parker wasn't on the board last year for "Weeds." Very odd. Glad to see that rectified this season and glad to see the series get a well-deserved outstanding comedy nomination. I'd have thought Justin Kirk was a worthy comedy supporting actor candidate, but I guess we need to keep recognize Jeremy Piven for doing the exact same thing over and over again on "Entourage."

Speaking of "Entourage," that's good nomination for Kevin Dillon, even though the Johnny Drama character has had a really spotty assortment of episodes this season. Actually, I don't think "Entourage" was really deserving of that comedy series nomination for last season and I'd have gladly replaced it with "HIMYM."

But good for "30 Rock" and all of its various nominations! I thought the pilot was mediocre, salvaged mostly by Alec Baldwin's performance, but as the season wore on, I began to appreciate everything else about the show, particularly Tina Fey's subtle work -- since when does the Academy honor SUBTLE? -- in the lead.

Oh and I'm also relieved that the Academy punished "24" for a season that went beyond self-parody at certain points. Kiefer Sutherland's work never faltered, though, so I can't entirely begrudge that grandfathered nomination. But Jean Smart? Yeah, she got nominated last year, but her performance this season was one hammy episode in which she committed an act of violence that FOX promised would be the most shocking moment in "24" history and yet was never mentioned again for the entire season. Weird.

The first observation, the one that all of my critical peers will probably also be making today, is that "Friday Night Lights" got jobbed. From what I can see, network TV's best drama received exactly two nominations, including one for Peter Berg's work on the pilot. While that's two more nominations that "The Wire," that's still pathetic. Kyle Chandler, Connie Britton and the writing staff deserve better. I think the absence of technical nominations is rather stunning, honestly. Cinematography? Editing? Sound design? We're talking location shooting with sports action here. Give it up from "Friday Night Lights," kids. It's well-established that Emmy nominations don't mean a darned thing to viewers, but giving the show its due couldn't have hurt NBC's promotional cause.

Really, there's nothing to be said about "The Wire." Michael K. Williams, I'm feelin' you, man. But "The Wire" was always ignored. Why did the Academy forget about "Deadwood"? Actually, they didn't. The show earned six technical nominations. But where's previous nominee Ian McShane? Where is the always deserving Robin Weigert? And where, most criminally, is Gerald McRaney, whose villainous George Hearst was a career-revitalizing revelation?

I was glad to see "Dexter" get a nomination for its main title design. Well deserved. But where did the rest of the show's nominations go? Where, mostly, did Michael C. Hall's lead actor nomination go?

Lots of second tier and mid-tier nominations for the ever-erratic "My Name Is Earl." And good to see a nomination for Jaime Pressly as supporting actor. But did anybody see the episode where the cat-allergic Randy dated a cat woman? If you saw that episode, tell me how Ethan Supplee gets left off the final ballot. Seriously.

Lorraine Bracco? Really? I know this was the last season for "The Sopranos" and we want to do our part to send that show off to heaven with a bang, but what did Dr. Melfi do this season? And what did Lorraine Bracco do? It's not that she hasn't deserved nominations in the past, but this year I'd make pleas for Weigert, Adrianne Palicki, Aimee Teegarden, Lisa Edelstein, the gal who played Snoop on "The Wire," Elizabeth Mitchell, Sarah Paulson, C.C.H. Pounder, et al.

There are also shows that you just can't expect Emmy voters to remember. It's good to see a visual effects nomination for the first episode of "Drive," but what about some editing nods? And how about tech nods for the pilot for "The Nine"?

In its first season of operation, The CW picked up a single Emmy nomination for sound editing on "Smallville." Huzzah.

If You're Betting: Yeah, you could put a few bucks on "The Sopranos" in just about every category, but if I were wagering my own personal fortune, I'd put ever cent on Helen Mirren in the lead actress, miniseries movie category. I love that her competition there includes Queen Latifah.
Tweet