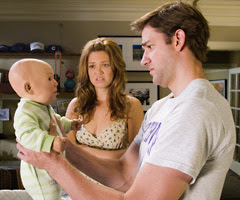 "License to Wed"
Director: Ken Kwapis
Fien Print Rating: 23
In a Nutshell: One of the movies that most disappointed me last spring was "The Sentinel." It wasn't an awful movie, but I felt sad that after spending most of his year doing a top-notch thriller on TV that Kiefer Sutherland had to use his hiatus to make a far inferior thriller on the big screen. I felt the same way watching "License to Wed," knowing that John Krasinski spends most of his year doing one of the best written and directed comedies on television, so naturally he spent his last hiatus doing one of the worst romantic comedies imaginable. Now I expect stupid people will say things like "John Krasinski is just another TV actor who isn't ready for the movies," as if he were a minor league baseball player called up to The Show before he could hit a curveball. He's more like a minor league pitcher who gets called up to a last place team, watches the defense behind him lead to dozens of unearned runs but picks up the loss anyway.

For the rest of my rambling on this less-than-worthy bit of summer counter-programming, follow through after the bump.

Put objectively, Krasinski isn't very good in "License to Wed," but I don't blame him. As if sensing that there isn't a single real laugh in the entire film, Krasinski mugs up a storm. It's odd, because much of his performance on "The Office" is made up of subtle glances and fleeting facial expressions, which he either underplays beautifully, or which appear to be underplayed because of the show's documentary-style aesthetic. You'd think "License" director Ken Kwapis would know Krasinski's strengths, since his TV credits include some of the finest "Office" episodes, including "Casino Night" and "Booze Cruise." Instead, though, he keeps shooting Krasinski in tight, over-lit close-ups, shots that make the actor look hammy and insincere. Krasinski's upcoming films include the George Clooney-directed "Leatherheads" and his own adaptation of David Foster Wallace's "Brief Interviews with Hideous Men," so he'll probably recover.

I'm a bit more skeptical about Mandy Moore, whose other 2007 release, "Because I Said So," is already guaranteed a place on my Worst of the Year list. Her taste in projects is so foul that I've totally lost any sense of whether she's dragging down the material she's opting to do or whether she keeps picking movies that couldn't be saved even if Meryl Streep or Helen Mirren were the leads.

Regardless, Krasinski and Moore have negligible chemistry and this was one of those romantic comedies were I would have been content to have the two leads meet at the end, shake hands and go their own separate ways. As it stands, they're such a poor match that the conclusion is some sort of Deus ex Jamaica.

And as for Robin Williams? He's just become inexcusably awful. This is him at his very worst, all voices and shouting without even a hint that his character is a real human occupying the real world. We've reached the point at which I'll see a movie that has Williams in a dramatic role, but I'm done watching him try to do comedies. And here's the worst part: Without Robin Williams, "License to Wed" probably couldn't have gotten made. I can't imagine a studio bankrolling this with any other actor playing the obnoxious Reverend Frank, so the script just would have gone into turnaround.

As bad as Williams is, he's even worse when mixed with Josh Flitter's character, a seemingly parentless Reverend Frank Jr. Should we be pleased that we've reached the point, culturally, where a movie can show a man of the cloth spending an unnaturally long period unaccompanied with a pre-teen boy and we aren't supposed to get skeeved out? Check that. I got skeeved out, but not because of anything sexual I inferred.

The supporting cast of "License to Wed" is peopled by talented actors collecting their paychecks. You'd think Mindy Kaling, Angela Kinsey, Brian Baumgartner and Rachael Harris would feel a bit of shame going from "The Office" or "The Daily Show" to something so weak, but they all got paid and there's no shame in that.

You know those creepy babies in the trailer? The nasty robotic creatures that pee in poor John Krasinski's mouth? They're ghoulish and narsty, but they were the funniest part of the movie.