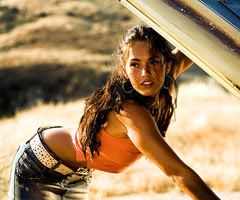 "Transformers"
Director: Michael Bay
Fien Print Rating (Out of 100): 45
In a Nutshell: I've already been asked, so you needn't bother: Given that "Transformers" is a Michael Bay movie based on a Hasbro toy line, how could I possibly have felt like I deserved anything more than I got out of it? Put more simply still: What the heck did I think I was plunking down my 12 bucks to see? They're robots in freakin' disguise. What more is there to it than that?

Sigh. I like people, I guess. Michael Bay doesn't need people and doesn't care about humans in his movies. So it's no surprise that Bay can't humanize man or robot in "Transformers." Thus, it's a 135-minute movie that's supposed to have global ramifications, but builds to a loud, bruising 45-minute conflict that takes place on two blocks of downtown Los Angeles (going by an alternative name for no good reason). In that conflict, CGI blurs bounce off each other accompanied by a fantastic and hard-working sound design.

I'm going to continue to ramble after the bump, OK?

I don't have to understand or be interested in the plot of a movie like this. And I didn't and wasn't. But there have to be human stakes, somewhere. Characters we recognize and empathize with have to be put in jeopardy and possibly even die, assuming they weren't played by top-billed actors. The audience has to develop sufficient hatred for the villains that we root for their death in the most bloodthirsty, vigilante sort of way. It has to be us or them.

In order to root against a villain, at least so far as I understand it, the villain's opposition to good or moral action has to be clearly understood. If a villain is out to kill humanity, you have to both understand why the villain wants to do away with humanity and feel that the desire is based on an actual hatred. For my money, "Transformers" don't work in large part because the Decepticons don't really care about humans. They don't care about global destruction. They care about an inanimate cube. Humans are collateral damage, but they lack the requisite reason for destroying Earth and its inhabitants. They don't hate us, so we don't fear them. I know that they were going to bring all of our machines to life or enslave us, but the movie gives less than a minute's time to illustrating that potentiality.

Oh no! Our Mountain Dew machines would come to life?!?!? That's the last straw. Damn those Decepticons.

Damn Megatron! And damn... that other Decepticon. And the other one. And that little nasty one! If I hadn't played with Transformers a bit as a kid, I wouldn't have even remembered any of the names of the miscellaneous Decepticons, but even remembering their names is pointless, because few of them have any noticeable characteristics or individual personalities. The Autobots aren't much better, though it's made clearer which GMC automobiles they're affiliated with and they're given repeated names. When Optimus Prime introduces them, he also explains their individual roles within the Autobot army -- munitions, medic, etc -- and then none of them perform any of those specialized roles within the movie. That's annoying. Despite the Autobots each having jobs and voices, one of them died and I both didn't feel a thing at the time and then didn't remember his death when it was mentioned later. Again, zero impact.

I guess it's not like the humans were making any impact either. Shia is fine, though his character spends the first half of the movie as a stammering and annoying dweeb and the second half of the movie staring at things in awe. His romantic foil, played by Megan Fox, looked phenomenal, but I kept wondering where she found time to sneak away to reapply her skank make-up. Josh Duhamel makes a bland but pretty action lead. The only actor who seems to be having any fun is John Turturro, who comes out of left field around the half-way point, seemingly out of a different movie entirely. Also in a different movie entirely? Bernie Mac.

But the coolest thing about the cast is that it has my two favorite government agents in recent TV history, with both Glenn Morshower (Agent Pierce on "24") and Michael O'Neill (Agent Ron Butterfield on "The West Wing").

Yes, the Transformers are a marvel to behold as realized by the various different effects houses. But when I played with Transformers, there was a connection between form and function -- different Autobots and Decepticons took different finite forms and the form they took impacted the powers they were able to utilize. In Michael Bay's "Transformers," the robots are much more malleable and the ones that don't transform into airplanes and helicopters seem perfectly capable of coming darned close to flying, etc. Also, with the original Transformers toys, it was always cool that that fighting robot fit perfectly into that sporty car, with no extra pieces and no additional size. In the movie, I didn't believe that Bumblebee had once been the size of a Camaro. He suddenly become vastly larger and more complicated when he went from car to fighting robot. That annoyed me.

I was also irked by how shiny the Transformers were, even at night when there were no light sources to create that reflection. They also seemed a bit weightless, like I never got a sense of how loud they were or how strong. They were able to wander around chatting on Shia TheBeef's lawn and not only did it take a while before they messed with the grass, but at no point did Shia TheBeef's parents hear them. That also annoyed me.

Perhaps the biggest way that the movie could have been fixed for me is if the humans had had any active agency in bringing about the climax of the plot.

[I'm going into spoilers here for the last act, so stop reading please if you haven't seen the movie or figure to see it some day.]

Our plucky and resourceful humans do, indeed, help bring about the end of the movie, but not through any learned behavior or particularly admirable skills or discoveries. At no point do the humans learn the weaknesses of the Decepticons, allowing them to take advantage of said weaknesses for victory. No, at some point Josh Duhamel's character hops on a motorcycle, rides under one and shoots it in the crotch and it goes down. Ummm... OK. I guess that's fine. It was dumb luck, but whatever. And Shia TheBeef brings about the final climax of the movie by jabbing the cube in Megatron's chest, an action that was never even suggested to him as a possibility (Optimus Prime volunteered his own sacrifice, but never explained anything about why it would work to the kid, much less that a similar course of action would work on a different Transformer... Again, dumb luck). And nearly 1/3rd of the movie's plot was built around Rachael Taylor and Anthony Anderson's techno-savvy characters, but descript their centrality to the narrative, they play no purpose in the plot. The characters meander around for a while, allow for exposition and then call in an air strike which, from what I recall, didn't lead to the demise of a single Decepticon. Then, in minimal aftermath to the excitement, those characters don't even appear. They just vanished. That's bad writing and a waste of time. Why couldn't those characters have been there for a reason?

And, in fact, review done. Sure, I could ramble on, but what's the point?