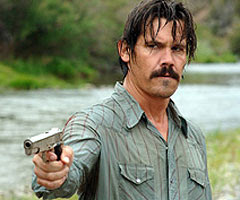 [Inevitable apologies for the show unveiling (and... er... writing) of the second part of this list. People have commented, IMed and asked doubting that the second half of the list was ever going to exist at all.

Flua Culpa in the case of this week. After five days of being barely able to leave my couch, I'm finally back to maybe 50%. I've contemplated taking HGH or steroids to get me back to blogging faster, but I want to make it clear that I wouldn't have been trying to give myself any competitive edge. I'd just have been trying to help the team.

I still have increasingly dim hopes of doing a truncated Oscars prediction post also, but don't hold your breath.]

Follow through after the bump for my Top 10. It's predictable. It's almost certainly gonna be shorter than usual. I'm sick and lazy.

5) "Once" (dir. John Carney) - There's a weird thing about "Once" that I have trouble explaining. It goes like this: Usually when I adore what's obviously a no-budget first film, I say "Boy, I can't wait to see what that director's going to do next," but despite loving "Once," I'm not bursting at the seams to see John Carney's next film. This is based on the completely unfair perception that I had walking out of the movie that "Once" was the product less of Carney's writing and directing and more of pure alchemy, that Carney's great stroke of genius was putting Glen Hansard and Marketa Irglova in front of the camera together. And resisting a traditional happy ending. I also don't know if I ever need to see Hansard and Irglova acting again, as honest and unaffected as their performances are. It's not a launching pad to other movies. "Once" is an 85-minute romantic, musical gem of a movie. I wouldn't add anything, polish anything or change anything to it. Is that weird?

4) "Atonement" (dir. Joe Wright) -- I guess my feelings for "Once" are no weirder than some folks already find my intense warmth for a certain breed of very classical, fairly British, epic filmmaking. I take no shame in my appreciation for Anthony Minghella's BIGGER works (I prefer "The Talented Mr. Ripley" and "Cold Mountain" to "The English Patient," though). I take no shame in owning and appreciating "Casablanca" and "Gone With the Wind." Viewing the word through a constant prism of irony doesn't preclude the ability to occasionally appreciate a masterful piece of earnest cinema. That's what "Atonement" is. If you put together a checklist of every technical aspect that goes into great filmmaking, it gets a mark in every category. The performances (with Saoirse Ronan as a well-deserved standout) are wonderful, as are the costumes, production design, cinematography, score and editing. Director Joe Wright shows that the camera control that elevated "Pride & Prejudice" wasn't just beginner's luck. The story problems that the movie suffers from are, I think, mostly a product of a difficult-to-adapt source material. Could I have felt a smidge more emotional pull at the end? I guess so. But I felt enough. This sort of filmmaking is done so very rarely and it's done badly so frequently that you want to honor the "Atonements" so that you aren't stuck with dozens more "Memoirs of a Geishas."

3) Judd Apatow FunPack: "Knocked Up" (Apatow)/ "Superbad" (Greg Mottola) -- Sorry for the cheat here. It happens. "Superbad" and "Knocked Up" were both the summer's best blockbusters and the year's best comedies and if any two films more permanently imprinted on the pop culture landscape this year, I don't know what they were. The remarkable thing is that despite outgrossing "Superbad," "Knocked Up" has probably taken a backseat in the collective consciousness, with the thousands upon thousands of teens now using "McLovin'" as their IM and message board handles. My feelings about the two films remain unchanged. Perhaps because Seth Rogen and Katherine Heigl are just better actors, I buy the sweetness at the core of "Knocked Up" more than the last act attempt to grow a heart on the part of "Superbad." And yet "Superbad" almost certainly delivers more laughs, as it doesn't relent to soft-headedness until the last 10 minutes, while Apatow's self-directed effort starts pulling punches around half-way.

2) "Zodiac" (dir. David Fincher) -- When I first sketched out a hypothetical list at the end of last year (yes, I've been procrastinating for a long time), "Zodiac" came in at No. 10. Then I watched Fincher's director's cut on DVD. None of the additions were big, but a second viewing moved the film up to No. 5. Then I watched wealth of bonus features, which clarified and explained Fincher's vision and his maniacal attention to detail and it was all I could do to keep "Zodiac" out of the top spot. It joins "All the President's Men" as one of the greatest thrillers ever made about a professional process, treating the job of being a police officer or a journalist with so much respect that it can't give in to the normal beats that we would expect from a serial killer movie. Robert Downey Jr. was screwed out of a supporting actor nomination, though the entire cast is excellent. And Harris Savides' cinematography is some of the finest use of digital photography yet to make it to the big screen (right up there with the lensing of "Collateral," if you ask me). This is a film with a stature that's only going to grow and grow and in a decade people will be blown away that the members of the Academy saw fit to give "Zodiac" ZERO Oscar nominations.

1) "No Country For Old Men" (dir. The Brothers Coen) -- My favorite Coen Brothers movie remains "Miller's Crossing," but someday soon it'll be great to set aside an evening and watch "Blood Simple," "Fargo" and "No Country For Old Men" all in a row to soak up how the Coen Brothers have so totally reshaped the contemporary crime thriller. Not enough has really been made of how literal an adaptation of Cormac McCarthy's novel this actually is. But as cinematic as McCarthy's novel was, the easiest thing for a filmmaker to do is to screw up a good book. The hardest thing is to fully realize that original potential. I wrote a lot about the movie and the book and the allegedly unresolved ending and all that other stuff that has some viewers all atwitter back when I first saw it. No movie got a higher rating from me last year, so nothing else had any chance of being No. 1 on my list. This one was easy.
Tweet