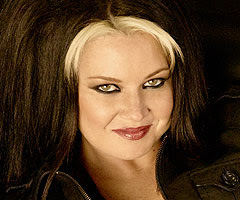 There has been much talk of a flu bug decimating the American Idol women this week. Is our shared infirmity going to make me more generous to Wednesday's (Feb. 20) performances from the Top 12 American Idol Women? Or am I going to blame them for infecting me at last week's Idol party? We'll see... As Ryan Seacrest says, the show must go on.

Singer: KRISTY LEE COOK
Song: "Rescue Me"
My Take: Enough already with Kristy Lee's barrel horse. In her Idol season, Carrie Underwood would often seemingly take weeks off, letting her role be played by Robo Carrie. I don't know if Kristy Lee has a Real Carrie in her, but she certainly has Robo Carrie down. She's a solid and experienced performer. Her wrinkled nose says "I'm naughty," while her raised eyebrows say "But I'm innocent, too." And her torn, stone-washed jeans say "I'm stuck in 1988." Vocally there isn't much to the performance. It's slight and the only thing I'll remember is that at least she didn't do "Amazing Grace" again..
Ron, Hermione and Simon Say: It wasn't her best performance for Randy, who calls it rough around the edges. Paula says that being sick is a good excuse, but she warns Kristy not to let circumstances get her down. Simon thinks the song didn't suit her and he calls Kristy robotic as well.

Singer: JOANNE BORGELLA
Song: "I Say a Little Prayer"
My Take: I think it's funny that Joanne wants to make it clear that even though she's a plus-sized African-American woman, it's acceptable for her to have the voice of a skinny white girl. No argument here. She flubs a lyric early on and it takes her a while to recover her baring. Joanne eventually rediscovers the melody, but the pacing of the song causes her trouble as well. Her voice is just a bit shrill for me.
Ron, Hermione and Simon Say: Randy blames nerves for her rough start. Paula's doing a lot of rationalizing tonight, telling Joanne that she needs to pull it together. Simon didn't like it at all. "What you just did there was a very average cabaret version of a cabaret song," he says. Joanne's dad looks ready to kill Simon. Joanne looks like she's having trouble standing up.

Singer: ALAINA WHITAKER
Song: "More Today Than Yesterday"
My Take: All Alaina wants for her upcoming birthday is your vote and a nice pair of shoes. Kudos to Alaina for not seeing like a preternaturally mature 16-year-old girl. Nope. She's just a teenage girl. This is a more vocally interesting arrangement than the version that Chikezie did last night. It starts off dreamy and there are places where she's a bit sharp, but she's the first vocalist of the night not to look or sound like she's in a coma. She's not showy, but it's a simple and strong performance.
Ron, Hermione and Simon Say: Randy says that once she got started, it was like goin' on. Paula thinks she nailed it, loving the ending in particular. "I think you're very good," says Simon, who doesn't know the song and gets even more confused when Paula starts mumbling about Spiral Staircase.

Singer: AMANDA OVERMYER
Song: "Baby Please Don't Go"
My Take: I respect Amanda's determination not to cover Janis Joplin anymore, though I think there were directions I might have preferred to see her take this theme. Amanda's facing one of the most aggressive musical arrangements I've ever heard on Idol, all guitars and drumming. It's amazing she's able to stand out at all. There isn't much melodically to the song, but she makes the most with what she's got. Her scatting lacks fluidity, but her voice is fantastic. I've said it before and I'll say it again: American Idol has never had a female rock vocalist like Amanda.
Ron, Hermione and Simon Say: Randy loves her trousers and the whole performance. Paula says Amanda isn't a one-trick pony and she loves every bit of her. "I think you stand out in the crowd," Simon says of yet another song that he's never heard before.

Singer: AMY DAVIS
Song: "Where the Boys Are"
My Take: Amy really needs to be marketing herself as young, sexy and brassy, not as a singer of dated torch songs. She's dreadfully unsure of the melody and the song becomes a droning bore. There would have been some Idol seasons in which Amy could have coasted as The Hot Girl for a few weeks, but this is such a uniformly attractive group that she's probably doomed already
Ron, Hermione and Simon Say: Randy accuses her of "scooping up to the notes." Paula says the camera loves her, but that the nerves and a poor song choice got to her. "You looked great, but you didn't sound great," Simon says.

Singer: BROOKE WHITE
Song: "Happy Together"
My Take: This is a more traditional version of the Golden Grahams theme than the one David Cook did last night. She doesn't have quite the voice for it, but Brooke aesthetically has something Carly Simon-esque about her. She was much more memorable in Hollywood with her keyboard and she's going to have to work to shake free of being That Perky Girl With the Dimples and the Sunny Disposition. That's not bad now, but it won't work long-term. If this season doesn't work out for them. Brooke and David Archuleta could hit the road in some sort of Osmond-style stage show.
Ron, Hermione and Simon Say: It started rough for Randy, but she worked it out, that she got "her slaying" on. Paula thinks Brooke has her own thing. Wait. What's that thing? I'm missing it. "There are times tonight that I feel like I'm in some commercial for washing up liquid," Simon says cryptically. He's disappointed that Brooke isn't heading to the dark side just yet. Ryan likes commercials for washing up liquids.

Check out the full flu-addled recap...

And check out all of my Idol coverage at Zap2it's Guide to American Idol.