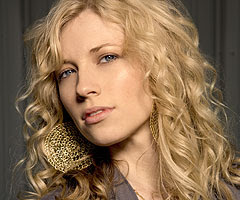 Welcome back to American Idol, where saying you want to decapitate a 16-year-old boy and leave his bloody skull dangling from your rearview mirror is a compliment and a sign of thoughtfully conceived judging. Which of the Top 10 Idol Women will prove deserving of becoming disembodied automotive ornamentation on Wednesday night?

Singer: CARLY SMITHSON
Song: "Crazy on You"
My Take: Already the women are making smarter song choices than the men did in Tuesday's lackluster show. Dipping into the Heart catalogue was a good move for Carly, though she gets a little shrill on some of the higher parts. After failing as a torch singer last week, Carly's closer to her comfort zone as a rocker. You know what Carly does more than anything, though? She reminds me how spectacular the Sisters Wilson are. This isn't the sort of cover that makes you forget that somebody'll always have done it better.
Jack, Chrissy and Simon Say: It started off rough for Randy, a little pitchy, but she found herself by the middle for an aight performance. Paula can tell Carly loves Heart. Paula loves heart too. In jars. On her desk. Simon, unsure why Carly's panting, doesn't think she's connected with the right song, that none of the girls can touch her vocally. He's just waiting for her to have her moment. Carly was bad last week and she's fine this week, but I'd feel better about her if the judges weren't required to over-plug her at every opportunity.

Singer: SYESHA MERCADO
Song: "Me and Mr[s] Jones"
My Take: This is a fabulous song that's designed for a male with a deep, soulful voice and it's been rearranged blandly for Syesha, pushing the verse to a high place where her voice is at its least interesting. When it gets to the chorus, she finds herself, but there isn't enough of that. She comes across as sweet, not sassy.
Jack, Chrissy and Simon Say: Randy didn't like the song choice, advising her to give it what she's got. Paula would like to cut Syesha into bits, wrap her in colorful paper and give her to children at Halloween as the ultimate treat, but only on the louder notes. Simon found it a bit indulgent and says that the gender-bending choice was a silly thing for her to have attempted.

Singer: BROOKE WHITE
Song: "You're So Vain"
My Take: Yes, I compared Brooke to Carly Simon in my recap last week. It wasn't exactly a stretch as comparisons go and now it seems downright obvious. Brooke's cover is straight-forward, familiar and well-interpreted, though it opens up the door for a discussion of how we feel about people doing carbon copy remakes of songs first performed by singer-songwriters. But that's another issue. Her voice sounds strong and well-matched. As for the guitar, Brooke starts playing, but it ends up on her lap for the middle. She picks it up again at the end, but at no point is it musically necessary for the performance, since the melody is being driven by the guitarist in the band. It's just something superfluous she's doing that makes her appear to have a reason to be sitting on a stool.
Jack, Chrissy and Simon Say: Randy thought it was a great song choice, but he asks if the song was intended for Simon. Paula would like to put Brooke's head on a pike and put that pike in the middle of town square, so that her song choices can inspire everybody forever. Simon absolutely loved it. He is, indeed, so vain and he suspects that the song is about him, doesn't he? Doesn't he?

Singer: RAMIELE MALUBAY
Song: "Don't Leave Me This Way"
My Take: After emphasizing one of her favorite aspects of Filipino culture -- Polynesian dancing -- Ramiele digs into another Filipino stand-by this week: Karaoke. When you hear the judges criticize karaoke performances, this is what they mean. She's just up there mouthing the words, staying in tune, bopping around looking like she's trying to make her good time appear infectious. There's nothing of her personality or tone to the performance, which there was last week.
Jack, Chrissy and Simon Say: It was only OK for Randy, who wonders why she didn't pick a doper record. Paula would like to cook Ramiele in a red wine reduction with seasonal vegetables and serve her at a dinner party, so that all of her friends can appreciate her fine flavors, but this week she doesn't feel like Ramiele got to perform her magic. Simon compares it to a ghastly wedding performance. He says Ramiele's still one of the top two or three female vocalists.

Singer: KRISTY LEE COOK
Song: "You're No Good"
My Take: After looking wan and tired last week and sounding that way too, Kristy looks great this week. But why do I feel nothing coming from her performance? The song is supposed to be scolding and scalding and Kristy just smiles and shakes. I may be wrong, but I recall a stern power to the Linda Ronstadt arrangement of the song that Kristy seems to be doing. Did I mention Kristy looks super? Because she does, in her tight, shimmery silver top.
Jack, Chrissy and Simon Say: Randy says it was a 100 percent improvement, but he's still waiting for her breakout moment. Paula, also relieved at Kristy's return to form, would like to stretch her out on a medieval rack, so that in addition to singing, she can also compete in the WNBA. Simon doesn't know how to label Kristy, but that she has real potential. He advises her to go more clearly in a country direction.

For the rest of the recap, head over to Zap2it's It Happened Last Night blog

And folks are always encouraged to check out Zap2it's Guide to American Idol.