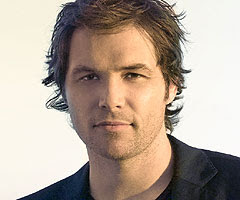 After a week battling through the flu, I think I'm working at 65 to 70 percent as Tuesday (Feb. 26) night's American Idol performance episode begins. As I learned from Paula Abdul, though, you can't use poor health as an excuse. You have to go out there and be yourself (or somebody very like you), expose your true colors to the world and paint every doorknob with the flavor of your dreams. The results for the Top 10 Idol men will follow...

Singer: MICHAEL JOHNS
Song: "Go You Your Own Way"
My Take: I'm not saying that men shouldn't sing Fleetwood Mac, but this is a poor choice for Michael. After his "I love sport!" pre-song clip, everything feels too casual, too taken-for-granted tonight. Some of it has something do with his relentless rocking/bouncing around the stage, which is making me seasick. More problematic is the fact that Michael is sharp throughout each chorus. He sort of strolls through each verse, but in the process of trying to sell the familiar part to the audience, he pushes much too hard. There was no '70s rock anthem to which he could have done more assertive justice?
Yacko, Dot and Simon Say: Randy kind of liked it, but wanted Michael to let go. Paula thinks he's doubly consistent, that he's "already there." Simon thinks it was his weakest performance, coasting along. Simon didn't like the song choice, but Paula insists it was directed at the women. Then never mind my criticism, readers. Ladies love sharp notes.

Singer: JASON CASTRO
Song: "I Just Want To Be Your Everything"
My Take: Poor Jason, shocked by the discovery that being on American Idol isn't just about making music. He's compensating by making double-music, whipping out the guitar again this week. He's letting the backing vocalists do the hardest, highest notes on this Andy Gibb cover, which feels like cheating to me. It's an easy song if you only do the easy part. Really, he exhibited a range of maybe four or five notes. Last week the guitar was a helpful prop. This week it was a crutch.
Yacko, Dot and Simon Say: Randy's concerned that this is a vocal competition and that the guitar was carrying him, calling it "cute" and "charming." Paula thinks it was a clever choice, but she wants to see him put aside the guitar next week. Simon thought the song was too schmaltzy and that he didn't do himself any favors.

Singer: LUKE MENARD
Song: "Killer Queen"
My Take: Luke is better with this song than last week's bland track, because Queen lets him show off some more theatrical vocals. I'm not sure his falsetto is really good enough to carry an entire song and Luke's vocal range doesn't let him have much back and forth even when the notes get lower. Performance-wise, Luke doesn't have a clue what to do without six or seven guys behind him on stage, so most of his effort is put into smiling and trying to remember the lyrics, rather than having any fun with the song's wordplay.
Yacko, Dot and Simon Say: Randy raves about the degree of difficulty, saying he's closer to his vibe. Paula says it was the perfect song and that this is why she fought to get Luke in the Top 24. "You are always going to be judged with the original and the trouble is that the singer of that song had charisma and personality and you didn't," Simon says. Luke's just happy somebody liked him.

Singer: ROBBIE CARRICO
Song: "Hot-Blooded"
My Take: Robbie's going to have to protest his rock credentials as long as he's on the show, Constantine-style. At least he doesn't have a Bo Bice embarrassing him each week. He does a decent pop vocal on a Foreigner song that probably requires more vocal rawness than he possesses. There's no rasp or edge to his voice at all and this song seems to require something like that to be properly sold. Here's my argument: Robbie can say he's rock-n-roll if he wants to and that's his prerogative. Rock-n-roll can be in his hair and in his scruff and in his jeans and in his drag-racing car. Rock-n-roll can be in his flippin' soul. But it isn't in his voice and he'd go further in this competition if he played to his actual strengths rather than what he views as the embodiment of his essence.
Yacko, Dot and Simon Say: Randy says that there are different types of rock, but he isn't sure if any of them were on display, that Robbie didn't have enough "UNGNGN!" Paula says nobody knows who you are but you. Then she says he played it safe and that he lost his character, which is her way of saying she didn't buy the song on him. Randy adds that Rock is an attitude and Robbie agrees. Simon thought the vocal was OK.

For the full recap, head over to Zap2it's It Happened Last Night blog.

And, as always, check out Zap2it's Guide to American Idol.
Tweet