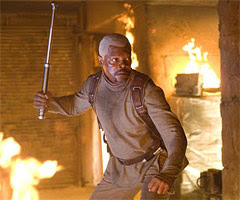 "Jumper"
Director: Doug Liman
Fien Print Rating (Out of 100): 27
In a Nutshell: I'm having a weekend of appendix movies.

I mean "appendix" in the vestigial organ sense, rather than the "thing at the end of a book" sense.

On Friday night, I watched "The Invasion" from Netflix. For at least an hour, I was convinced that "The Invasion" had gotten a really bum rap when it opened in August to dismissive reviews and minimal box office. Yes, it was another remake of "Invasion of the Body Snatchers" that the world didn't necessarily need, but it was made with an effective chilly alienation and the tension was developing effectively. I even liked Nicole Kidman's performance, if only because she's become an absolute master at playing semi-Stepford women. Then, in the last 30 minutes, the movie suddenly becomes a jumbled mess of poorly staged chase scenes and sequences which visually don't match with the style of the rest of the movie. Even if I hadn't know that the movie was, indeed, directed first by Oliver Hirschbiegel and was then essentially redirected by James McTeigue, I'd have figured it was directed by two people. I *think* I liked Hirschbiegel's version and was offended by the inter-splicing of McTeigue's, but since I quite enjoyed "V for Vendetta," it's possible that it was the other way around.

Either way, the good work of "The Invasion" is eventually undone by the vestigial traces of another movie poking out at the edges.

The same is true of "Jumper," though Doug Liman's movie has almost none of that good work and it totally overpowered by the sense that it's trying to be a half-dozen different failed movies at once.

Follow through after the bump for a full review...

There are three credited screenwriters on "Jumper," bringing Steven Gould's book to the big screen. David Goyer ("Batman Begins"), Jim Uhls ("Fight Club") and Simon Kinberg ("Mr. & Mrs. Smith") have all done good work before and it's somewhat possible that individually they all did good drafts of a "Jumper" script, but the final result is filmmaking through a blender.

Doug Liman can't be blameless in this mess, though his track record is the main reason I went to see the movie in the first place. "Swingers," "Go," "The Bourne Identity" and "Mr. & Mrs. Smith" all have places in my DVD collection, as does the pilot to "The O.C." I'd say the guy has probably built up enough good faith to weather "Jumper," particularly since it seems on its way to opening solidly, the wastefulness of "Jumper" is near epic.

The stories of the production are part of the public record. Liman was going to direct a relatively expensive adaptation of the book with a cast of relative unknowns. The studio wanted a name to sell the movie and in came the black hole of charisma known as Hayden Christensen [Did George Lucas destroy the guy from "Shattered Glass" and even "Life as a House" forever?]. Then, already into shooting, Liman decided he wanted a new romantic lead and in came Rachel Bilson. The movie is just glutted with actors, characters and trace subplots that must have been from an earlier script, from an earlier version of the movie.

The premise is basic, cool and completely unexplained. Young David has a near-death experience and discovers he can teleport. The end. He leaves his old life and goes off to another one, fueled by the cash he makes breaking into banks. Fair enough. That's fun stuff and it ought to open the door for a wealth of subtext about approaching young adulthood and the initial sense that your world is suddenly without boundaries followed by the inevitable realization that with freedom comes responsibility and that you really can't go anywhere and do anything as you may once have fantasized. That theme, which HAD to have run through one of the three versions of the script, is almost nowhere to be found in the final "Jumper," which is all plot. Jumper David is on the run from Samuel Jackson, who's out to kill him (and has no character to speak of other than that). Period.

As befits a movie about people capable of jumping through space without the actual process of physical travel, "Jumper" skips from event to event without any requirements of logic. In order for three-quarters of the movie to make a bit of sense, you have to accept that the main character -- having just had a white-haired Samuel L. Jackson break into his home, expose his secret, kick his butt and sent him scurrying off into the world as a refugee -- would find that the perfect time to go back to him hometown to rekindle affections with the girl he regretted leaving years earlier. Then you have to accept that, after carrying around the guilt of perhaps being at least partly responsible for the death of her classmate, said girl would greet said boy with romantic interest and enthusiasm and make no mention of the eight years he'd vanished. Once you've gone that far, you'd have even less trouble dealing with his decision, less than a day after his run-in with Sam Jack, to whisk his lady love off to Rome for hotel nookie and an illicit tour of the Coliseum.

A casting note: I was thrown into a weird loop right from the beginning, when Young Hayden Christensen is played by Max Thieriot, who looks a lot like Christensen and appeared to be 16 or 17, but young Rachel Bilson is played by AnnaSophia Robb, who looks 13 or 14. Then, since Christensen doesn't appear much older than 21 or 22 himself, I was barely sure how much time had passed (eight years, according to the dialogue) or how old the characters were and whether they were supposed to be peers, since Bilson comes across as much more mature than Christensen on screen. It's really just a mess.

Bilson was a late addition to the cast and given just how little of a character she has to play, it's almost mind-boggling to imagine how much worse the entire movie would have felt with a less charming leading lady. She acting opposite a brick wall -- Christensen is affectless to a Keanu-esque degree -- and reciting banal dialogue in a part that might as well not even have a name, but she's still adorable and impressively capable of getting laughs straight-lines.

She deserves to be in a better movie as does Jamie Bell, playing a more experienced jumper with a personal vendetta. Unless I'm misremembering, Bell's character arc is never resolved and in a sequel, Christensen could probably be jettisoned, leaving the action to good ol' Billy Elliot.

If Bilson and Bell deserve a better movie, Diane Lane pops up seemingly out of a different movie entirely. Her presence is spoiled in the opening credits, where she gets a "with" credit. She appears thrice -- once in a flashback, once in an unexplained plot contrivance and once for unmotivated exposition (along with a distracting cameo from the Little Boy From "Panic Room" [Kristen Stewart]). The character serves no purpose to the narrative and there's no reason why an actress of Lane's Oscar nominated caliber needed to be playing the part.

Then again, she's not alone. In a career characterized by an eagerness to do any role whatsoever for money, this may be the worst role Jackson has ever taken. He has white hair. That's it. Hand's up if you were craving a Mace Windu/ Anakin Skywalker reunion? Didn't think so.

On a technical level, "Jumper" looks fine and Barry Peterson's cinematography does a fine job of capturing the amount of Rupert Murdoch's money that Liman was wasting on location work. Tokyo? Cairo? Rome? London? For all it served the film, they could have shot on a green screen and CGIed in Mars.

The CGI jumping effects start out interesting, but since the physics of jumping are never explored, I wondered why the characters caused variable damage to the places they were jumping to and from. And the film's money shot -- the double-decker bus flipping in the middle of the desert -- is thrown away like it's no more important than Jar Jar Binks.

Sigh. I went back to the movies for *this*?