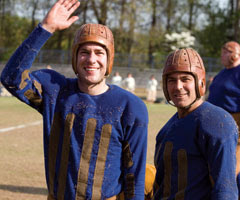 "Leatherheads"
Director: George Clooney
Fien Print Rating: 57
In a Nutshell: [I'm going to kick off with some vague spoilers here. If you're aware of the sports film genre, you won't be shocked. If you're not, maybe you shouldn't be reading me at all, eh?]

Or at least it should.

So after around 100 minutes, "Leatherheads" reaches The Big Game and people start talking -- not very subtly -- about that clash of cultures I just mentioned and I wanted to scream at the screen, "Yo Clooney... That's not what the movie's been about for 100 minutes. Don't try suddenly making it about that now."

Because "Leatherheads" is a minimum of two movies at war with each other, probably more than that.

More after the bump, kids...

[Note: The before-the-bump portion of this review was written last weekend when I saw the movie in question. Then, as so often happens, life intruded. It's Friday as I write this and I'd really like to blog a little on last night's Survivor and yet I can't start something new until I finish something old. In fact, I shouldn't be working on this review, because I've already received multiple requests to go back and spoil the ending of "The Ruins" at the end of *that* review. Grumble. Dan Needs More Time. And More Sleep.]

Much has been written in recent weeks about Clooney's battle with the WGA over the writing credits for "Leatherheads," which still go to Duncan Brantley and Rick Reilly. Clooney has said that the idea to turn the proto-football drama into a romantic screwball comedy was mostly his and, as I think back over the movie I watched last weekend, I don't know if he should be so proud. "Leatherheads" might have worked as a screwball comedy and it might have worked as a chronicle of the early days of the NFL.

The movie that's in theaters is neither fish nor fowl. It's a series of homages, some marvelous, some dismal and generally frustratingly disjointed and leading to a running time of 114 minutes.

The football aspects have been mostly soft-pedaled. Viewers are unlikely to understand how the professional game differed from the college game in the period and nobody on Earth will be able to figure out why it was such a big deal to think of a college star going pro. The early pro scenes make it look like the players are inept, rather than dirty and the end-of-film talk about how Clooney's character loves trick plays, cheating and playing dirty doesn't make a lick of sense since the only trick play we really see is a single Statue of Liberty fake. Oklahoma Sooners fans can tell you that the Statue of Liberty is still very much alive in today's wacky college game. I can only assume that the original script emphasized the pro/college split and focused on the differences between Dodge Connelly (Clooney) and Carter Rutherford (Krazinski) in a way that went deeper than one being a likeable rogue and the other being a likeable cad.

Sometimes Clooney the Director thinks he's Howard Hawks, but "Leatherheads" has a flaccid pace at odds with the crackle and zip of a "Bringing Up Baby" or "His Girl Friday." Clooney and editor aren't worried about letting scenes play a little long just in case funny things are happening on the fringes. Unfortunately, they mostly aren't.

Sometimes he thinks he's Preston Sturgess, but the writing is limited by its lack of limitations. If Clooney had imposed some Hayes Code-style restrictions on himself, perhaps his double-entendres and flirtations wouldn't have seemed so obvious. Stars Clooney, Krasinski and Renee Zellweger also don't hesitate to mug for their randy punchlines, while the vintage comedies of the '30s and '40s had to be likeably understated to avoid censorship.

The actors are similarly playing roles they watched in a TCM afternoon marathon. Clooney alternates between being Cary Grant and Clark Gable. Krasinski misinterprets what used to Jimmy Stewart so charming in his early roles (he was most than just callow and emotionally open). And Zellweger can't quite make her girlishly breathy voice fit any archetype. She tries being brassy and Hepburn/Russell-y, but her voice vanishes into a whisper or a squeak at the end of every sentence. All three, Clooney in particular, are constantly winking at the audience, ever entertained by the fan they appear to be having.

And don't get me wrong. Lots of "Leatherheads" is plenty of fun. Even in a film so unsure of its tone and theme as this one, Clooney is extremely confident behind the camera. And he and DP Newton Thomas Sigel have composed a number of beautiful images and a color palate that's evocative and unique (albeit better suited for a film opening in October than April). Composer Randy Newman punctuates every jolly moment with one of his typical Copeland-for-Hire scores.

[A last note: Universal originally intended to release "Leatherheads" last fall, when people were properly juiced for football viewership and for a variety of reasons -- promotion on "Michael Clayton," his motorcycle accident, production on the new Coen Brothers movie -- it was pushed back. But why to last weekend? We're about as far from football season to either side as it could possibly be. Instead, this was Final Four weekend, the first weekend of the baseball season and NBA playoff races are just heating up. It was bad enough that Universal didn't know how to promote the movie to begin with, but who did they expect would be seeing it last weekend anyway? Sigh. Maybe it'll get a bump this weekend, when it's only going up against baseball, the NBA and the Masters.]
Tweet