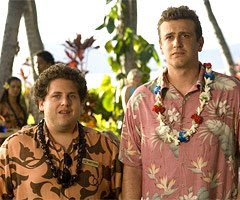 "Forgetting Sarah Marshall"
Director: Nicholas Stoller
Fien Print Rating (Out of 100): 65
In a Nutshell: [My apologies for the sporadic posting as of late. I haven't gotten back in a TV blogging rhythm post-Strike and I've been over-invested in blogging for Zap2it, which is appropriate since I've been told that the Tribune Company owns all of my intellectual thoughts and meditations. I've thought about blogging on a few different DVDs I've watched, but I've been too busy to get to them. I'm waiting to write up my opinion on "Speed Racer" -- narrative clunkiness and just-for-the-kids humor all too frequently undermine a visionary aesthetic -- until after the industry trade papers break the embargo. But after a pretty dreadful week, I decided I needed some Friday afternoon levity and I went to go see a movie. This movie. Hence this review.]

I've read reviews from legitimate sources that have referred to Judd Apatow as the "creator" of "Forgetting Sarah Marshall." The degree to which Apatow has become a franchise and the degree to which his star hasn't been dimmed by the failures of "Walk Hard" and "Drillbit Taylor" is remarkable.

And I guess I'm going to do it too. Because yes, "Forgetting Sarah Marshall" was written by star Jason Segel and it was directed by Nicholas Stoller, but it fits in naturally with the Apatow oeuvre. You've got the slacker/babe romantic pairings, the intentionally formless improvisational feel, the admiration for male full-frontal nudity, the welcome glorification of dweeby implicitly Jewish heroes and the sense of entitlement that somehow feels convinced that a flimsy romantic comedy structure can support a running time of nearly two hours.

If anything, "Forgetting Sarah Marshall" feels even looser than much of the Apatow products, perhaps stemming from the fact that Segel and Stoller are taking their first stabs at writing and directing a feature. I guess that's why even though I laughed out loud quite a bit at "Forgetting Sarah Marshall," my ever-arbitrary ratings system puts it a notch below "Virgin," "Knocked Up" and "Superbad."

NFL Draft-distracted ramblings about the movie after the bump.

"Forgetting Sarah Marshall" is a chancier proposition than several Apatow productions because it asks Segel to take a big leap into leading man territory. For most viewers, I guess he's pretty much "That supporting guy from all of those Judd Apatow movies," but he was the slightly unsung hero -- to my mind, at least -- of "Freaks & Geeks," a spectacular guest star on "Undeclared" and an equal part of the exceptional "How I Met Your Mother" ensemble. I didn't really doubt that I could spend two hours happily watching Segel.

Since he's already an atypical star -- he's much too tall, much too shambling, much too enamored of his physical imperfections -- Segel's courageous gesture here has been to craft his "Sarah Marshall" character as a far more pathetic guy than the actor actually is. And this isn't one of those cool-within-the-pathetic situations like Seth Rogen's "Knocked Up" character or the two leads in "Knocked Up." In those movies, the whole point of the narrative was to convince viewers that with only minimal personal growth, those characters were plenty cool all along. With "Forgetting Sarah Marshall," Segel's Peter, there's a journey that has to be taken and Segel's an actor with so little ego (except, apparently, as it relates to his genitals) that he's willing to cry, fall down, sing in a funny voice, play the piano... anything, really. Segel's gung ho attitude as an actor smoothes out the bumps in Segel's script, which stumbles over some clumsy plot points and some clumsier pop culture references. Even if the "Sarah Marshall" script feels raw, I can't wait to see what Segel does with "The Muppets."

One of the things Apatow and company have done a great job with is finding women who fit into the Boys Club voice of the films. From Catherine Keener to Katherine Heigl to Emma Stone in "Superbad," they've found actresses with enough spunk and goofball charm that their on-screen romantic pairings have at least made a modicum of sense.

It's no surprise that Bell is a brassy treat as the title character, that she's willing to go into self-parody and that she gets even hotter the filthier the role asks her to be. As a character, Sarah Marshall isn't all-the-way-developed. Bell isn't playing a real person so much as the most effective way of shining in a series of individual and disconnected scenes. It isn't surprising that Sarah vanishes from the film's last 20 minutes, because she hasn't been handed an arc that could be resolved (unless you count the start-of-credits gag TV show, a concept that has to be making Ben Silverman champ at the bit).

And credit whoever realized that at 24, Mila Kunis was finally ready to play an adult and whoever was savvy enough to recognize just how well her beauty would translate to the big screen. "The '70s Show" never had all that much substance, but what it had was three or four actors capable of nailing even flaccid punchlines. Topher Grace and Ashton Kutcher have already begun to make their marks on the big screen and Kunis' ability to make a lot of out nearly nothing as Jackie Burkhart was underappreciated during the FOX comedy's lengthy run. Yes, she's smoking, but she has an openness to her smile that makes Kunis almost seem approachable.

Then again, Kunis' Rachel is also a less realized character than I might have liked. The "Superbad" women were mighty fuzzy as well, but Heigl and Keener's characters were a bit more three-dimensional, weren't they? Or am I just wearing rose-colored glasses?

To use a baseball analogy, Apatow has done a fantastic job with moving his stars up the ladder, with getting them all some work in the minor leagues and then advancing them until they're ready for the big leagues. He did it with Rogen and with Segel. Leslie Mann got a starring role in "Drillbit Taylor" and Paul Rudd has left the Apatow umbrella for his star turn in "I Love You, Man." I have faith that eventually Jay Baruchel is gonna get his vehicle. Might I suggest an Apatow featured player who's ready to move to go to the next level? Carla Gallo. She was great on "Undeclared" and had fine cameos in "40-Year-Old Virgin" and "Superbad" and her "Sarah Marshall" drop-in -- as an unexpectedly kinky sexual partner -- is almost a reprise of her "Virgin" role. Might I suggest a larger role for her sometime in the near future? She obviously can't be the female lead yet, but her Apatow-feature roles have been Toe-Sucking Girl, Period Blood Girl and Gag Me Girl. How about a name next time?

My appreciation for the film's female players doesn't really carry over to the male co-stars who each, bar none, become less funny the more we're exposed to them. Russell Brand's Aldous Snow remains amusing for the longest period of time both because of Brand's flawless delivery and because blowhard pop stars are fertile targets for mockery. But Jonah Hill, Rudd and Jack McBrayer all make what should have been one or two scene cameos that were somehow expanded to payoff-free extended roles. Bill Hader has a little more to do, but for the bulk of the film, especially when he only pops up via webcam or phone, add little.

The male characters are responsible for many of the lengthy dry spells in laughter that a film this frequently sharp shouldn't have had. With 20 minutes worth of Hill, Rudd, McBrayer, Hader and maybe Brand on the cutting room floor, the movie would have sped along without any storytelling gaps and the eventual DVD could have been bursting with bonus materials. As it was, I felt like I was watching a lot of should-have-been-deleted scenes on the big screen.

I guess my other major complaint is that movies like this one and like "50 First Dates" have really done nothing to make me want to go visit Hawaii. Visually, "Sarah Marshall" coasts on a few scenic backdrops, but it almost could have been shot in LA using stages, the Pacific Ocean and a little bit of post-production color correction for that "tropical look." I have to say that "Blue Crush" did a much better job of convincing me that there's more to Hawaii than leis, roasted pigs, obese jolly giants and Israel Kamakawiwo'ole cover tunes. And that's not saying much.

I'm at that point where I either keep on rambling, or I start switching between the draft, the Red Sox game and the Lakers game. Unfortunately, I need more concentration to do the latter and that's my pick, I think...
Tweet