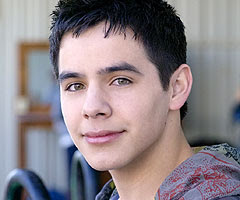 For six-and-a-half seasons now, American Idol contestants have heard near-weekly lectures from the judges about how covering certain singers -- Whitney, Christina, Celine, Mariah -- is just a recipe for disaster, Tuesday (April 15) night's show is dedicated entirely to karaoke versions of Mariah Carey hits. Gee. That sounds like a recipe for disaster, right?

Singer: PRESUMPTIVE AMERICAN IDOL DAVID ARCHULETA
Song: "When You Believe"
My Take: Perhaps more than ever before, opening the show has been a death sentence this season. How did David Archuleta come to be performing first tonight, then? And, more importantly, how did he come to be wearing what appear to be leather pants? Ugh. I guess this wasn't the week for David to break out of his power balladeering mode, was it? Anybody remember the last time he looked like he was having fun? I only remember his eyes half-closed and his hand raised up urging viewers to follow him on his Children's March. Whether you're viewing David as remarkably consistent or remarkably monotonous is completely subjective at this point. I think he's aware that the only way he can lose is to make a horrible mistake and he has no interest in swaying new fans. I like how the only advice we saw Mariah give David was to go into his falsetto at the end. And that he didn't. Mariah Carey has no advice to give David Archuleta. [Note: At least one reader says David did the falsetto and I was just napping through it. I can't necessarily disagree.]
Garnett, Pierce and Simon Say: Randy was a little worried tonight, but he says that David can sing and therefore he can sing anything. This is factually inaccurate. Paula suspects that it's a huge honor for Mariah to hear David Archuleta sing her songs. Simon says he could have predicted the song choice, but that David performed it very well.

Singer: CARLY SMITHSON
Song: "Without You"
My Take: This is an interesting choice, because it's a song that pre-dates Mariah (not that you'd hear anybody mention "Harry Nilsson") and therefore hasn't been completely defined by Mariah. The song has a slow build and for a while there's a clear sense that Carly is holding herself back, trying to avoid over-singing. It's a decent strategy and it prevents some of the excess she's been prone to in her lesser moments. But do you really want to watch a performer who's only showing you a third of her performance capacity? And since this should, at least in theory, be a mighty emotional song, how are you supposed to connect to a cover where the singer's every thought is only "I'm trying not to yell at you"?
Garnett, Pierce and Simon Say: Randy urges her to check it out, but he cautions that she needs to trust herself in her lower register. Paula's a fan of the new-found the vocal restraint. Simon just doesn't think Carly can pull off the Mariah comparison. He suggests she's capable of pulling it off, but she's not confident enough.

Singer: SYESHA MERCADO
Song: "Vanishing"
My Take: This is a trap night for Syesha, whose every song choice this season has suggested a diva's confidence, if not the diva's ability. Dressed fetchingly in a tight gold evening gown, Syesha isn't taking the soft-sell here. The performance is almost nothing but runs and vibrato and vocal brinksmanship. It feels like a technical showcase more than a pure vocal performance and I think that if she had trusted the melody a bit more and showboated a bit less, it might have been better overall. That being said, there's obvious skill to what she's doing and there's also more risk-taking here than in either David or Carly's numbers. As Randy is so prone to saying, Syesha doesn't take the easy road.
Garnett, Pierce and Simon Say: Randy likes that she's bold and that all-things-considered she did a good job. Paula stammers something about Syesha's intelligence, raving it was "unbelievably magical." Simon would have chosen a song that more people know.

And how were the other four performers?

As always, check out the full recap over at Zap2it's It Happened Last Night blog.