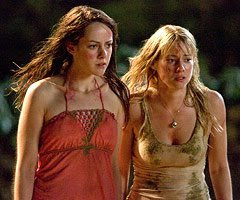 "The Ruins"
Director: Carter Smith
Fien Print Rating (Out of 100): 55
In a Nutshell: As a beach read this past summer, Scott Smith's "The Ruins" was good fun. It was just a little disturbing, just a little icky, just a little psychologically provocative and very difficult to put down. The most common complaint I've heard from people who read the book is that it's too long, a complaint I'd expect to dissipate somewhat in the wake of the 91-minute feature version of "The Ruins."

About the only thing keeping Smith's book from coming off as a gorier, less political "Day of the Triffids" was the idea that it was about how four carefully delineated characters -- all familiar and one-dimensional, but still consistent in their pathologies -- dealt with an impossible-to-fathom horror. Because the book was so long, their litany of misfortune was never-ending, but for every wretched thing that happened, readers understood why the characters behaved the way they did. The ending of the book was very much a sum of their decisions.

In its tightened 90 minute form, the cinematic "Ruins" can't muster that kind of careful delineation. Over 600 pages, people can show various colors as they face a green, leafy ancient evil. In an hour-and-a-half, it turns out that most people's terror response is nearly identical: Their eyes get red and buggy and they scream a lot. Good-bye to nuance.

More on the movie, plus some spoilers about the ending (all accompanied by proper warning) after the bump...

Two things were most encouraging to me about "The Ruins" and they're likely the two reasons why I felt the need to go see a Friday afternoon matinee, rather than waiting two months for the DVD.

The first is that Smith adapted his own book. "The Ruins" struck me as a tough property to bring to the screen -- It's limited in characters, restricted in location and its main adversary is a creature capable of going from scary to silly in the transition from your imagination to a CGI effect. For nearly an hour, then, Smith delivers a bare bones -- pun somewhat intended -- version of his book, doing exactly the things any editor does when paring a lengthy text. The basics are untouched: Four college students (played by Jonathan Tucker, Jena Malone, Shawn Ashmore and Laura Ramsey) on a Mexican vacation decide to accompany a German tourist (Joe Anderson) on a mini-adventure to some off-the-map Mayan ruins. Their reason for going is even less important in the movie than it was in the book. They get to the ruins, though, and really, really, really bad stuff happens. Period.

In the translation, Smith gives himself around 10 minutes of establishing time to establish very basic traits about each character in the hopes that viewers will read those traits onto what the characters do later in the movie (that's the only way they aren't just all panicking and freaking out on the same level). Then for a while he just goes through the book and keeps every third or fourth creepy element, which still leaves a lot of bad things to happen. Because Ramsey's Stacy was already the least developed character in the book, she's been given some of the inconveniences/misfortunes that befall Ashmore's Eric, which leaves Eric as the least memorable character in the movie.

Then, with around 20 minutes left, the movie falls apart completely. The methodical and steady pacing of the book vanishes as in one heady rush, the fates of all four characters are determined and an ending is tacked on that's neither the ending from the book nor the most logical Hollywood ending. The wreak of studio tampering by the time the closing credits roll is unbearable and I'd be mighty curious as to how Smith originally drafted the film's second half. It's my instinct that there will be deleted scenes and alternate endings galore when "The Ruins" comes out on DVD.

As I've suggested, though, the movie works well enough for an hour. The book is all about the "How would you respond in these circumstances?" element, but the movie can't pause long enough for any of that to set in. There's a decent balance between the traditional shock-scares pushed by Graeme Revell's genre-standard score and the very different kind of unease posed by the gore effects, which are mighty unflinching. There are plenty of bloody wounds, some exposed bones and at least one amusing exploding head. The lead effect -- the killer vine -- is pretty cheap looking, but first-time feature director Carter Smith nicely avoids over-concentration on the monster, either its exact nature and mechanics or its origin. The point the book makes, and a point the movie tries to make, is that the creature is just the impetus to make these four friends potentially do bad things to each other.

In general, credit-where-credit-is-due, Smith keeps the movie from ever feeling claustrophobic and the action zips along from one terror to the next. The failure to build to anything meaningful is one that I place on the editors and studio gadflies who trusted test screening scores over the demands of the narrative. I'd like to see Carter Smith and Scott Smith's version of this movie, because I'll bet you it plays better than what I saw yesterday.

The main stars of "The Ruins" deliver performances that are definitely a step better than a film of this nature would require. Malone and Tucker have both honed their chops in indie movies and neither is Hollywood's conventional idea of eye-candy, so they deliver a certain intensity, plus they look good for as long as the movie wants them to look good (everybody's bloody, dirty and a bit nasty by the end). Ramsey has the responsibility to provide both fleeting seconds of unexpected --and not unappreciated -- nudity at the beginning (the genre demands it, I guess), but also much of the dramatic heft toward the end and since I'm not sure that I've ever noticed her before, I was pretty impressed.

Oh. I mentioned earlier that there were two things that made me see the movie in the theater, the first being Smith writing his own script. The second was the presence of cinematographer Darius Khondji. One of cinema's most oddly reclusive DPs, Khondji actually has this movie, "Funny Games" and "My Blueberry Nights" hitting theaters at the exact same thing. Hmmm... Guess which two movies he might have done to work with respected international auteurs and guess which film he might have done to pick up a studio paycheck? There's very little evidence here of the man who shot "Delicatessen," "City of Lost Children," "Se7en" and "Panic Room." The photography in "The Ruins" is unremarkable. It may, in fact, be too fine (in terms of cinematic grain), in that it exposes the weaknesses in the CG effects, but also occasional sloppiness and inconsistencies in the make-up work.