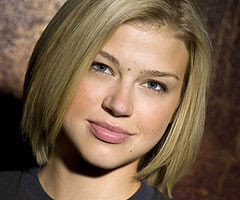 Say this for Ben Silverman and the new NBC Administration: They practice what they preach.

Last fall, if you remember, NBC dedicated a whole week to going Green and the network forced all of its showrunners to to shoehorn in plotlines about solar power, hybrid automobiles and recycling.

Then on Wednesday (April 2), NBC jumped the gun on the upfront season by announcing a schedule that's heavy on recycling.

Not to my mind.

Check out NBC's three-tiered schedule over at Zap2it. It's too hard for me to feel like taking it night-by-night, but if you follow through after the bump, I'll go into a bit more depth on a few things.

So yeah. NBC's outside-the-box programming includes a modern take on the King David story ("Kings"), an updated telling of the Camelot myth ("Merlin"), a revamped version of "Robinson Crusoe" ("Crusoe"), a fresh Jekyll-n-Hyde story ("My Own Worst Enemy"), a remake of "Knight Rider" that we already know sucks, a remake of an Australian comedy ("Kath & Kim"), a spin-off of an existing show ("The Office Spin-Off") and if "The Philanthropist" isn't "Brewster's Millions" meets "Batman" without the humor or the rubber suit, I don't know what it is.

My colleague Rick challenged my accusations of lack-of-originality by asking me what the truly original shows on TV are ("Pushing Daisies" and then... umm...). It isn't bad that so many of NBC's programs are rehashs. What's bad is that they're hyperliteral rehashes. There's the pitch where you say "It's *like* a hip retelling of..." and then there's the pitch where you say "It *is* a hip retelling of..." NBC has too many of the latter this season, while last season -- the last of Kevin Reilly's seasons at the helm -- had more of the former. I mean, "Chuck" is like a lot of stuff, but it isn't just a remake of the British format "Nigel."

[Incidentally, if anybody out there wants to work with me on "Nigel," the Britishification of "Chuck," I think it's a marketable idea.]

Everybody seems to agree that the best thing NBC did -- "best" for those of us who care about such things -- was bringing back "Friday Night Lights." I couldn't be more skeptical. For one thing, "FNL" is definitely reaching that "Veronica Mars: Season Three" point at which the hints of the show I once loved are tempered by the scars of corporate meddling and creative anemia. There's something to be said for a show leaving on top and "FNL" could have done that last year. Now? Not so much.

But even if you accept that renewing "FNL" is Silverman's gift to the TV critics, a way to avoid criticism for everything else he'll inevitably be criticized for, the actual mechanism of its return is dreadful. New episodes will begin airing on DirecTV in October, but DirecTV's exclusive window on the 13 episode third season will last until early 2009, an exclusivity that includes both NBC.com and Hulu. There aren't many "FNL" fans, but the fans there are are mighty dedicated. A few may even switch over to DirecTV to follow the show, though that seems like a really big commitment for 13 hours of programming. I thought about swapping to DirecTV last spring for the MLB Extra Innings package, but I decided that even for 162 Red Sox games, that was a lot of trouble. But for 13 hours? Not a chance. Now I'm not going to advocate digital piracy, but the episodes are going to make their way online somehow and what are the odds that tried-and-true "FNL" fans are going to say "Well, I'll just wait three months," knowing that the episodes are out there in the ether? I'm gonna go with "low." Then the show will return to NBC, it'll get plunked in the same Friday night slot that didn't really work this year (albeit after actual football season is mostly over, which could be beneficial) and nobody will watch. I wonder how many people currently subscribing to DirecTV are "FNL" fans, because those dozen people are the only real beneficiaries. NBC knows this, but it's all about finding different ways to manage failure.

I mean, "Knight Rider" is doomed. It was awful as a backdoor pilot and despite relentless promotion, its initial sample audience was smaller than the premiere crowd for "Bionic Woman." Now "Bionic Woman" wasn't much, but it was several steps above "Knight Rider" in terms of quality. But "Knight Rider" is so totally leveraged as a Ford commercial that it probably doesn't matter to NBC what the ratings look like. I guess NBC must get extra commercial dollars for airing encores of "Knight Rider" on Saturday nights. Since the entire show is one big commercial, I wonder if NBC intends to use that Nielsen loophole where they can add the audiences from two different airings together if the commercial spots are identical? Either way, NBC's fall Wednesdays, with "Knight Rider," "Deal or No Deal" and then "Lipstick Jungle" look disastrous.

Poor "Journeyman." At least it had a surprisingly satisfying fall finale. Meanwhile, I'm glad to have "Life" back, even if NBC is pushing it into the corner known as 10 p.m. on Fridays. That's a slot that practically screams "Quick cancellation and then 'Dateline,'" except that several NBC bigwigs have been quoted as saying that time slots may not be set in stone for individual programs, but they're committed to the genres.

I guess I'm glad that most of the things I watch on NBC staying stable. The Thursday comedies aren't going anywhere. They don't get ratings and NBC is well accustomed to that. "Heroes" isn't going anywhere, though another slow start like this season's and I might lose interest fast. It would be good if NBC could find some way to tease up interest in "Chuck" during the summer, rather than just assuming that the audience will remember to come back in the fall after nine months away. You can't count on viewers doing anything by force-of-habit after only 13 episodes.

Stupid me for asking this, but why was NBC in such a rush to announce this schedule? If they think that this is their best proof that they've figured out a way around traditional scheduling and development models... Well, consider me skeptical.
Tweet