MovieWatch: "Indiana Jones and the Kingdom of the Crystal Skull" 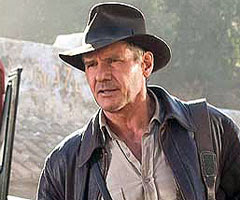 "Indiana Jones and the Kingdom of the Crystal Skull"
Director: Steven Spielberg
Fien Print Rating (Out of 100): 65
In a Nutshell: The good news first: Reports that "Indiana Jones and the Quest For Profit" was an unmitigated disaster appear to have been somewhat overblown. I'd say "This is proof that even as part of a pure money-grab, Spielberg isn't capable of making an unmitigated disaster," but the guy's last sequel was "The Lost World." So I won't say that. But no, the early reviews suggesting that "Indy 4" would torpedo the franchise and rape all of our childhood memories in the manner George Lucas previously perpetrated with the "Star Wars" prequels aren't really accurate.

Since the movie was first announced, I've been plagued by the feeling that nobody was making the movie for the right reasons: Lucas, Spielberg and Harrison Ford aren't short on money, so they aren't exactly hungry. The third movie left no unresolved plotlines or cliffhangers. To be frank, fans have only been clamoring for another Indy movie in a nebulous sense. And, worst of all, it wasn't like Spielberg and company had a story they NEEDED to tell, the number of writers and drafts for this movie confirm that nobody had a narrative imperative to make another "Indiana Jones" adventure. So why did they bother? They seem to have all felt that it was something that was inevitably expected of them and, after nearly 20 years, I guess they all came to the conclusion that they'd waited as long as they could, so they might as well make SOMETHING.

"Indiana Jones and the Kingdom of the Crystal Skull" is, given all of those liabilities, almost as good a movie as could possibly have been made. It doesn't have an iota of urgency, but it's gracefully respectful. There's fun to be had and you won't feel like retroactive enjoyment of the first three movies has been damaged.

[In terms of hard-and-fast spoilers, this review doesn't go overboard. But it does contain some spoilers, to be sure. Feel free to skim. I won't be insulted. I never am.]

In reviewing the newly released DVD box set for the first three movies last weekend, I went through the entire trilogy for the first time since... I dunno when. "Raiders of the Lost Ark" remains one of the two or three finest popcorn movies ever made and one of the all-time best action movies. It's superior. I'm still a huge "Temple of Doom" fan and not just because of how much I loved it when I was young and how central it was to my sense of "play" for years afterwards. It's as messed up and demented a mainstream movie as has ever been made and the final hour is non-stop action, relentless. Even in my youth, "The Last Crusade" didn't blow me away and rewatched now, through the prism of nearly two decades of increasing cynicism, it was even worse. On my Twitter Feed (Subscribe now!) I wrote "Watched immediately after "Temple," "Last Crusade" is like an eager-to-please puppy, all loose-bowelled pandering, panting and mugging. Ick." I'm gonna stand by that.

The best thing about "Indiana Jones and the Kingdom of the Crystal Skull" is that it isn't "Lethal Weapon 4." That is to say that the actors don't stop the action every 15 minutes to wink and the audience and say, "Yes, we're too old for this shit." Harrison Ford is too old to be the Indiana Jones of yesteryear, but he's plenty young enough to put on the fedora, unfurl his whip and kick but in that exaggerated Saturday Morning Serial Brawling style that the franchise has always enjoyed. Yes, his first line of dialogue is an "I'm too old for this" wink and there are probably three or four similar nods throughout.

The action has certainly slowed to accommodate him. As a prequel, "Temple of Doom" was more intense and faster paced to remind you that you were watching a younger Indiana Jones. Similarly, "Kingdom of the Crystal Skull" dials things down just a bit. Is that because Ford didn't want to do more aggressive stunts? Is it because Spielberg was afraid that audiences would shy from watching a senior citizen in any extreme jeopardy? Or is it just that Ford, Spielberg and Lucas are older and they approach the world in a different way. I'm less convinced on that last one, since Spielberg's two most recent movies -- "Munich" and "War of the Worlds" -- were plenty intense, at their best. I think the character just dictated the action.

So Ford's ability to wisecrack hasn't been numbed and he can still punch and jump and run just fine. He's respectful to the character and the movie is respectful to the franchise. As usual, "Temple of Doom" is ignored entirely -- Couldn't we have gotten one Short Round joke? -- but characters from the other films are acknowledged and in-jokes are tossed around.

The movie is loaded with set pieces, but I don't know which of the set pieces I'm actually going to remember. The movie starts with a romp in an airplane hanger and later includes a chase through the streets of New Haven and several extended jungle-based sequences. But none of them are likely to define the movie in the way that Indy following the baskets in the market did the first movie or the mine cart chase defined the second. Nor will the locations define this movie, as they have the first three.

Part of the problem with both of those complaints is that a franchise originally characterized by its respect for stunt work and practical effects has become just another slave to special effects. I think Spielberg probably is still using more practical effects here than you'll see in most any other movie this summer, but so many key moments are just glutted with computer accompaniment. If the first movie had snakes and the second bugs and the third rats, "Indy 4" has its own creepy, crawly menace. I won't spoil it, but it's a computer effect. A good one, but a computer effect. The South African jungle scenes, while clearly shot somewhere exotic, have been so augmented by effects and matte work that they're not really referencing any place in the real world anymore. If there are rocks falling or secret passages opening or giant stone sculptures coming together, they're mostly CG. Sorry, but I miss the innocence of Indy outrunning that boulder in the first movie.

As it is, "Indiana Jones and the Kingdom of the Crystal Skull" feels much too influenced by the "National Treasure" movies, where character stand around solving stupid puzzles in the least believable and cinematic way possible and they have CG-flavored adventures. "Indy 4" is better than either of the "National Treasure" movies. Much. But it has the same problematic narrative structure, which stems from the fact that David Koepp's script has long been accepted as a Frankenstein's Monster of previous "Indy 4" script drafts. So if scenes don't necessarily flow together, that's why. And if plot threads introduced early are never mentioned again, much less paid off, that's probably why. The eponymous Crystal Skull is like the ultimate hero prop. Whenever Koepp runs into a storytelling problem, he relies on the skull's magical mystical powers for an escape. Then he whips out a climax that strongly resembles the end of "Raiders" only with a lot more effects.

Fans have been terrified about Shia LaBeouf's presence in this movie for well over a year and TheBeef isn't a distraction. Nor, though, is he well enough utilized. Spielberg, a director whose work has long shown an obsession with father/son dynamics, hasn't bothered to decide how Ford and TheBeef should relate to each other and, as a disappointing result, having this new pint-sized addition brings out nothing in Indiana Jones' character, neither when he first meets the boy, nor when he learns the boy's relationship to Marion Ravenwood, whose return means more time for Karen Allen. So no, TheBeef doesn't carry his fair share of the "Indy 4" dramatic weight, but that's the fault of the script and not of the actor and fans will probably just be relieved at how unannoying he is.

As for the rest of the cast, Jim Broadbent's totally wasted and Ray Winstone and John Hurt are underused. With her severe haircut in-and-out accent, Cate Blanchett makes such a fabulous serial-style villain that you yearn for her to have more of a character so that Blanchett could do a bit more acting. TV familiar faces Neil Flynn and Alan Dale appear in an early scene, one that was absolutely leftover from a different script draft.

Bottom line: I went into "Indiana Jones and the Kingdom of the Crystal Skull" expecting the worst. And I had fun watching. But I never felt inclined to cheer. I never experienced the exhilaration that even "The Last Crusade" gave me when I was younger and that "Raiders" and "Temple" still give me today. But Indy's back and he still hates snakes. The hat's back. The whip's back. Marion's back. Take those things for what they're worth.
Tweet