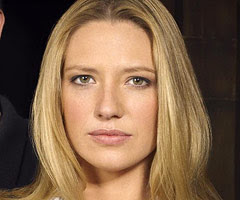 [Herein I remind you, faithful readers, that these aren't reviews of the pilots in question. If they were, they'd be much longer and much more divided into paragraphs. In fact, I've pretty much decided that "paragraphs" would be the clearest distinction I'd give between a review and first impressions. Just as the pilots themselves are just a wee bit unformed, these first impressions are also just a wee bit unformed. That's not the same as being a wee bit uniformed, which would involve funny sailor suits, I suspect. OK. Enough of that. Not. A. Review.

I'm not sure when TV critics are likely to get the next wave of screeners this summer. CBS sent out what it had. I covered that. NBC and ABC are still casting and tinkering and in pre-production and whatnot. The CW is shooting the "90210" pilot, but it's hard to imagine them rushing together a rough edit just to tease critics, at least not until we're a bit closer to Press Tour. So it may be a while before the next "Take Me to the Pilots" update.

Nice of FOX, at least, to screen a rough version of the "Fringe" pilot for available scribes yesterday. FOX publicists wanted to emphasize its roughness, though it was complete enough that the effects work looked polished and the location identifying titles, a snazzy trademark for the series, are in place. FOX is banking pretty highly on "Fringe," which will launch with an ambitious two-hour pilot and will then reap the rewards of a "House" lead-in. Put simply, I think they can be confident that "Fringe" will open. Where it goes from there? Who knows? But I sure preferred the "Fringe" pilot to either of the CBS drama pilots, which isn't really a good blurb, is it?

More impressions after the bump...

Show: "Fringe" (FOX Drama)
The Pitch: "X-Files" meets "Altered States" meets "The Odd Couple"!
Quick Response: I read an early version of the script and semi-reviewed it for Zap2it just before the upfronts. The draft I read was 114 pages, a bit rough and felt *really* long for a TV pilot. The produced version is a more respectable 90-ish minutes. The pilot moves relatively well -- thanks largely to director Alex Graves, who's about as good as it gets when it comes to setting the style and tone for a series in short order -- but I'm not exactly sure that all of the right choices were made in the trimming of the script. The set-up exposition is nearly untouched, establishing FBI Agent Olivia Dunham (Anna Torv) and the mysterious and slightly gross happenings on an international flight into Boston. It's intentionally semi-generic stuff, creepy and icky, but familiar and almost devoid of humor. The story kicks into gear in its body with the introduction of an institutionalized mad scientist (John Noble) and his estranged genius son (Joshua Jackson). That's the meat of the show, the relationship between the father and son with the young FBI agent as buffer, that's where the dark comedy builds. If the "X-Files" procedural aspects aren't unique, this main dynamic is and all three actors are solid. Noble is spectacularly twitchy and endearing as the more-than-eccentric father and Jackson is effectively scruffy and incredulous as his kid. To my mind, Torv was the wild card due to her unproven track record and since I couldn't get a real sense of her personality from the early clips. While her American accent comes and goes -- it limits the expressiveness of her line-readings in a way that domestic audiences have come to expect from the seemingly neverending slew of foreign actors who do the exact same regionless, flat "American" accent -- Torv won me over really fast (albeit may not as instantly as previous Abrams discoveries Keri Russell, Jennifer Garner and Evangeline Lilly). Odds are you've never seen her before (unless you're a fan of Aussie TV), but you'll feel like you recognize Torv, which caused me to spend a while playing the "Recognizable Actress Mash-Up" game to decide which titillating union would best produce an Anna Torv. I'm going with Poppy Montgomery plus Kiele Sanchez, but others' results may vary (I feel confident with the Poppy Montgomery part, but replacing Sanchez with Kate Hudson or maybe Laura Prepon might make sense). She's beautiful, but she doesn't look like a 21-year-old model masquerading as a law enforcement official. She has a smidge of weathering, which I mean as a total compliment. As long as Torv, Jackson and Noble continue to play well off of each other, "Fringe" should work, though cutting to Lance Reddick, as a stern and possibly shady Homeland Security bigwig, is always a safe alternative. Much of the fat from the script has been trimmed from the last act, which now feels a bit too scattered for my tastes. In less than 15 minutes there's one major unexplained character reversal, the introduction of an Evil Corporate Conspiracy (wouldn't be Abrams without one) and the laid foundation for the week-to-week series. Each of those elements feels rushed and, looking back over the script, each of those elements -- all crucial moving forward -- could be propped up with an additional line or two of excised dialogue. If that material was actually shot and if the pilot is as unfinished as FOX publicists tried to suggest, I'd love to see five minutes trimmed from the set-up and padded onto the end. If you haven't seen the pilot -- and you presumably haven't -- that's probably a bit vague, eh? My apologies. This isn't a review, after all. Otherwise... High production values, good location work, nice set direction, Michael Giacchino-esque score (either because it was actually Michael Giacchino or because they were using temp score from "Alias" or "Lost"), some snazzy and gross makeup and practical effects, plus a cow... "Fringe" looks good... I would caution FOX, though, on over-exposure. I already feel like I've seen the same extended ad too many times... [POST SCRIPT: There are two other changes from the script I read that made me pause. One: The Potentially Evil Corporate Entity at the story's center has gone from "Prometheus" to "Massive Dynamics." The old name was obviously better, but I'm guessing it didn't clear, since somebody must have named their corporation after the fire-stealer at some point. I wonder how far down the clearance list "Massive Dynamics" was. I wouldn't be surprised to see that change. Another change, a small one, is that in an early scene Jackson's character is in Iraq negotiating with two shady businessmen who try talking behind their backs. As it is now, he informs them, after they've talked, that he speaks Farsi. This seeming cultural inaccuracy annoyed several people at the screening I was at. In the original script, though, he tells them he speaks Arabic, which makes more sense. Why was this change made, I wonder...]
Desire to Watch Again: High.
Tweet