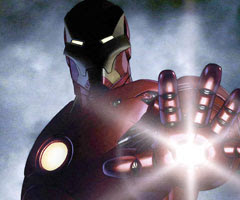 "Iron Man"
Director: Jon Favreau
Fien Print Rating (Out of 100): 67
In a Nutshell: [For those of you keeping score at home, the reaction to the pre-"Iron Man" trailers were as follows: Silence at "Indiana Jones and the Quest for Profit" except for a hoot or two of derision at the first appearance of Shia TheBeef, playing Marlon Brandon from "The Wild Ones," only minus the testosterone. Utter silence -- but a comforting lack of mockery -- to the new "Incredible Hulk" trailer, which is just like the earlier one -- i.e. the CGI is REALLY unimpressive and Edward Norton is REALLY mopey -- only it makes a little sense, narrative-wise. As for "The Dark Knight," much excitement at the beginning, buzzing and whatnot, polite quiet throughout and scattering applause at the end. That's not scientific or anything, but it sure feels like "The Dark Knight" is generating enthusiasm, "The Incredible Hulk" is generating indifference and "Indiana Jones 4: The Quest for Profit" is well on its way to reminding viewers of a certain age -- my age, in particular -- that we never really wanted another Indy movie so much in the first place. The only think that's going to get me into the theater to see "Indy 4" is my abiding and unshakeable faith in Steven Spielberg, even though the last sequel the guy directed himself was "The Lost World." Anywho...]

I understand why so many sitcoms have button endings, that last punchline that comes after the credits. The networks want that last commercial break to be as watched as all of the previous commercial breaks and therefore worth as much to the advertisers. So throwing in a final joke for viewers is a nice compromise: You help us make a few more bucks and we'll give you one last laugh, a gag that your DVRs will probably cut off by accident anyway.

I understand why other movies might include a little Easter egg at the end of their closing credits, a last punchline or even a direct fourth-wall-breaking nod to viewers dedicated enough to stay through the names of all of the valuable below-the-line people who made the movie possible.

I'm a wee bit irked by "Iron Man" because staying for the full credit sequence isn't optional. It's pretty darned near mandatory. The thing that happens after the closing credits isn't just a wink at geeks and comic book fans, as I've seen other people try to say. It's the ending of the movie and the push into the inevitable sequel (a $32 million Friday only helps matters). And "Iron Man" had a lot of people working on it, so you have to stay through a ton of credits, but the stuff that happens after the credits, it's a plot point, not an Easter Egg. It's the most satisfying available conclusion to a movie that already suffers from thin storytelling.

And yet I saw the movie with a mostly full house on Friday afternoon and fewer than a dozen people stayed.

So all I'm saying before the bump is stay for the credits. You don't need to read every name that comes on screen. You can talk to your friends or check headlines on your cell phone or whatever. Even if you don't understand the information imparted at the end -- the guys in front of me went CRAZY, while the older couple behind me said, "So what did that actually mean?" -- it's important.

Now the actual review? That's after the bump...

[I'm sure there are spoilers coming...]

I've yet to talk to anybody who actively disliked "Iron Man." That's impressive. I'm not including Kenneth Turan's L.A. Times review in this ranks, because I've never read a more clear example of a "I'm too old for this shit!" review in recent memory.

There are those who leave with the orgasmic gushings of "It's the best comic book movie since [INSERT RELIABLE CLICHE (i.e. Richard Donner's "Superman" or Tim Burton's "Batman") HERE]! They got it right!" Those gushings have been building since Comic-Con last summer, a reception that I've seen Jon Favreau mention in at least two publicity interviews. Who knew at the time that we were witnessing our generation's comic book Woodstock? Certainly not I.

And then there are the Moderate Positives. Those reviews appear to rave about Robert Downer Jr. in the lead role, tend to talk about how fun the movie is and then tend to criticize just how little actually happens in it beyond the basic origin story.

I fall in the latter camp and I guess I'm trying to think if I have anything new to add.

Robert Downey Jr. does, indeed, keep "Iron Man" afloat, serving almost the exact same purpose that Michael Keaton served in the first two "Batman" movies. It's a mistake to assume or believe that any man who tries living as an upstanding citizen by day, but yearns to don a funny suit and fight crime by night is completely normal or sane and Downey and Keaton have a similar off-kilter indie charm that says, "Well, it was either I become a superhero or I turn to drugs, alcohol and randomly climbing into the beds of neighbor children in a deranged stupor." Downey's Tony Stark spends an awful lot of time talking to robots and even if a certain amount of sentience is assumed on their part -- some are, some aren't -- that's probably a sign of a certain degree of psychological dysfunction and Downey conveys that flawlessly.

It shouldn't be surprising that Downey is such a confident physical actor. He earned an Oscar nomination for playing Charlie Chaplin, for heaven's sake. But so much of buying Stark's transition into Iron Man comes from Downey's body language, since that's what keeps us from viewing the snarky billionaire and the robotic suit as two separate entities. Top-to-bottom, it's a great piece of casting and a great performance.

But Downey's hardly the only actor-of-quality in the "Iron Man" cast.

Gwyneth Paltrow has long been an enigma, because she's been drawn to a certain kind of wan and bloodless character and that's been the sort of role directors have pictured her for, but the best performances of her career -- "Emma" and "Flesh and Blood" and "Shakespeare in Love" -- have all be feisty and spirited. But who thinks of Gwyneth Paltrow as a potentially strong or lusty actress? Her Pepper Potts is underwritten to the extreme, but she comes to life because of Paltrow's line readings and just her presence and it's such a relief to see Paltrow taking a role that offers no chance of an Oscar at the end of the line. Her only task is to be a fun part of an ensemble and to hint that in future movies, her character can become more important.

The same is true of Terrence Howard, who has to be one of my three or four favorite working actors at this moment. I love the way he plays against the type that his heavy-lidded drowsy eyes and soft, nearly feminine, voice would seem to push him toward. He's now played a string of authority figures, giving unexpected punch each time. Like Paltrow, some people will think that Howard is wasted in "Iron Man," but the franchise fans know that Rhodes and Pepper Potts are introduced here to pay dividends in the sequel. Or possibly the sequel after that. They're there to give the universe flexibility in the movies to come.

[Speaking of that, is Favreau-the-Actor setting himself up for a bigger part in future films?]

The film's final major cast member is Jeff Bridges, who looks effectively evil and malevolently avuncular with his bald head and bushy beard, which is countered whenever he opens his mouth and you remember that he's The Dude. Bridges' Obadiah is so clearly wicked from the beginning that he's denied any sort of arc either on his own or with Stark. And as a result, he makes a half-hearted adversary for the first film in a franchise. And as a result of that, "Iron Man," as a movie, lacks the requisite build-up and climax.

A lot of time is spent on the original Iron Man origin. Then a lot of time is spent experimenting on different suits. And by the time Iron Man makes his first fully formed appearance, he has time to do one quick heroic act and then it's time for him to dispatch the Big Bad and for the movie to end. Like Potts and Rhodes, the entire "Iron Man" movie is just the set-up to a sequel.

That's always the problem with first superhero movies, that everybody loves origin stories, but they may not make for the most satisfying of movies. The theory should always be, then, that the second movie in a franchise is better than the first, a la "Spider-Man" and "Spider-Man 2," though "Spider-Man 3" stunk, so that's a problem. Christopher Nolan appears to have understood that truism. While I preferred "Batman Begins" to "Iron Man," it's still an origin movie and, as a result, it has too many false climaxes and the actual climax isn't all that memory. Nolan was smart to introduce lower-first-tier villains for his first movie, saving The Joker, Two-Face, et al for subsequent features where they can actually stand out. Favreau has pretty much done the same in "Iron Man." It's a prologue.

And the problem with the prologue approach is that it's always asking you to project forward to the next movie, the Real Movie. As such, "Iron Man" has almost no dramatic stakes. If the shady Middle Eastern Terrorists (no less faceless and generic for setting the beginning of the movie against the real world context of Afghanistan), get Jericho missiles or even Iron Man suits of their own, so what? Even Faran Tahir's Raza, so negligible a baddie here that his fate is never hinted at, only lists his plans as taking over Asia. That may be serious, but it doesn't mean much in the context of the movie. The stakes for Stark and Iron Man mostly involve protecting the name of his company and restoring consumer confidence. Yes, he feels a bit of conservative-turned-liberal guilt, but it's an afterthought.

So the finale of "Iron Man" is just another of those CGI Creation #1 vs. CGI Creation #2 closings, the sort of thing that almost never satisfies and that leaves me, just one day later, without any memory of how Iron Man ended up winning the day.

Little else in the movie is truly memorable because of how little emotion is involved.

I guess it boils down to this: When "Iron Man 2" comes out, I'll be eager to see the sequel. When "Iron Man" comes out on DVD, though, I doubt I'll care much about seeing it a second time.

Now, time to get ready for the Kentucky Derby, the most exciting three minutes in sports.