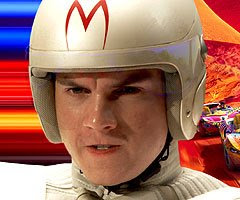 "Speed Racer"
Director[s]: The Brothers Wachowski
Fien Print Rating (Out of 100): 57
In a Nutshell: With some movies, there are advantages to putting the opening scenes online. You suck viewers in and you make them think, "Damn, if what the studio is giving us for FREE is so cool, think of all the fun we might have if we shell out our $12 bucks!"

But I think Warner Bros. is making a mistake in making the first seven minutes of "Speed Racer" online. The first seven minutes of the Wachowski Brothers' first feature since the two-part desecration of the "Matrix" franchise are the best part of "Speed Racer." In the short term, teasing that footage is bound to excite a few undecided viewers. In the long term, it's going to raise expectations, expectations that "Speed Racer" just can't meet, despite a running time of nearly 130 minutes.

Yes, that's more than two hours for a movie based on an animated series and aimed mostly at small children. I expect more than a few viewers to leave "Speed Racer" feeling exhausted and bludgeoned, a strange sensation when it comes on top of feeling bored.

The greater distance I put between myself and my viewing of "Speed Racer," the less I like the movie in my mind. In the immediate aftermath of seeing it three weeks ago, a bit of the adrenaline rush from the beginning carried over afterwards and I'd have maybe gone 10 points higher in my arbitrary and meaningless ratings system. Since "Speed Racer" is a movie with a pulse, but no heart -- don't ask me to explain the biology -- it hasn't lingered well and by next week, my arbitrary and meaningless rating might be even lower.

As for a review? That's after the bump.

One thing that can't be denied is that "Speed Racer" looks like nothing you've ever seen before, though there's a very "Tron"-esque sense that the technology on display will someday be put to better use by somebody else.

The Wachowskis and cinematographer David Tattersall have created a unique color scheme of bright colors and shiny, glossy surfaces. It's like falling into a bag of Skittles, with just as much narrative continuity. The aesthetic is complicated by the fact that it borrows heavily from the classic "Speed Racer" animated series, which projected a view of the future from a late-60s context, while the movie takes that retro-futurism and gives it a fresh coat of paint. So the future as the Wachowskis, production designer Owen Paterson and the visual effects team have depicted it is partially based on an outmoded version of technological evolution, with a new set of projections scaffolded over it. Wait. That makes no sense. The world of this "Speed Racer" is set in both the Wachowskis' future and in the future of the original series, futures devised out of totally different presents and totally different contexts and it's a unique hodge-podge. Does that make more sense?

The difference, I guess, is that the original creators of "Speed Racer" had never played a video game and since leaving reality behind after "Bound," the Wachowskis have decided that the real world is a video game.

Of course, that's all made screwy by the fact that "Speed Racer" doesn't really take place on Earth, or at least not our version of Earth.

"Speed Racer" is a fast-paced swirl of flipping and flying cars and even if the storytelling gets increasingly bungled as the movie progresses, there isn't a stagnant frame in the entire movie. The Wachowskis are versed enough in comic book paneling and in the vernacular of the animated series that "Speed Racer" never feels as flat as the Robert Rodriguez's "Spy Kids" movies, which had a similar color scheme but suffered from Rodriguez's "jack-of-all-trades/master-of-none" version of distracted filmmaking.

Like the snazzy cars themselves, images fly by in "Speed Racer," a movie whose greatest service to humanity may be in revealing children with epileptic tendencies.

In theory what ought to be grounding the movie is its better-than-expected cast.

I didn't feel bad or sad or embarrassed for the actors caught up in the phantasmagorical nightmare of shapes, colors and imaginary imagery. But I never got so caught up in the movie to stop thinking about how blatantly silly the production process was for them. Sometimes I thought about how much fun this must have been for them and other times about what a pain it looked like, but the movie never became so immersive that I forgot about the process.

So I watched Emile Hirsh as Speed Racer and I thought about how weird it must have been to go from "Into the Wild" to "Speed Racer," how Sean Penn must have received periodic collect calls from Hirsh wailing, "Oh Method Acting God, I've completely lost my motivation, again!" to which Penn's response was probably something along the lines of, "Your motivation, son, is money." Fortunately or unfortunately, Hirsh seems to have found his motivation in discomfort, so he's never quite as placid and implacable as I think of Speed Racer being in the cartoon. Hirsh is playing "low-grade tortured," when I think the role's demands were closer to "low-grade intense." He looks the part, but he isn't as perfectly plastic as Zak Efron might have been.

The most flawless member of the cast is clearly Christina Ricci, who has always been an anime character to begin with, with her eyes and smile capable of taking over 95% of her face. Ricci's Trixie isn't much of a character -- none of them really are, so that doesn't matter -- but the she carries over just enough of her "Black Snake Moan" raunch to create a marvelous dichotomy. Trixie's so darned pure that she and Speed go to makeout point to talk about racing. They don't even hold hands. But if you periodically think back to Samuel L. Jackson chaining Ricci to a radiator in her undies, the movie suddenly becomes much more exciting.

Ricci and Susan Sarandon, as Speedy's doting mum, look like they ought to be related and all Sarandon has to do is ratchet up the nurturing instinct on the sort of mother role she's played a thousand times. And as Pops Racer, Goodman is just adding to a catalogue of larger-than-life semi-animated characters including Fred Flintstone and Babe Ruth. Goodman looks a bit slimmed down here, though in the scenes where he gets to kick a little ass, there's less of the actor and more of his body doubles than I might have liked.

A dispiriting revelation: Those who know me know that my tolerance for antics involving monkeys and pigs is near limitless. And that extends to nearly all things simian. I'm easily entertained, so the fact that Chim-Chim, the beloved "Speed Racer" simian, didn't amuse me left me scratching my head as to why my pleasure centers had become so dulled. I mean, there's a monkey bumping into things, doing martial arts, apparently regretting in impact of excessive human-style consumption and I couldn't muster even a giggle. Were Chim-Chim's attempts at hilarity being pitched too low-brow even for me? Was he too anthropomorphized? Or not anthropomorphized enough? Was I simultaneously being distracted by Chim-Chim's human lesser half Spritle, played charmlessly by Paulie Litt? I don't know. Perhaps my problem was that the Spritle/Chim-Chim movie only rarely meshed with the bigger film featuring Speed, Trixie, Racer X and the characters I cared more about and so every time we flashed back to that G-rated part of the ensemble, I was disappointed.

I was even more disappointed by the villain, Roget Allam's Evil Corporate Overlord. Part of me was tempted to wonder if the Wachowskis were attempting some sort of really low level political satire here, if Royalton Industries was supposed to represent Haliburton and if racing was supposed to be a metaphor for war and if the movie's entire theme had to do with big business staging and fixing wars just to elevate stock price. If they were, they didn't do it very well.

Allam is totally forgettable in a role that requires an over-the-top level of malevolence, rather than just smarminess. It's a role that required an Alan Rickman or an Ian McKellan or a John Hurt or a Hugo Weaving. It's a role that required the kind of stature that transcends script limitations. I don't doubt Allam's general acting chops, but I've seen him in at least a dozen film and TV projects and I can never remember his name and this probably won't be the film in which he makes his imprint. It's telling that Hiroyuki Sanada has almost no dialogue and what dialogue he has is unintelligible, but he still brought more wicked charisma to the movie than Allam.

That Allam is the main antagonist in the movie and yet lacks a head-to-head on-screen final confrontation with Speed Racer is just one of the movie's biggest dramatic flaws.

Basically, if you're having a racing movie, it has to build to The Big Race and that Big Race has to be on a physical and emotional scale that make it markedly bigger than the races that have come before. The movie has to BUILD. With "Speed Racer," there are at least three big races and they actually diminish in technical expertise. The opening time trial sequence, in which Speed's backstory and the entire history of his family are intercut with a single looping lap, is tighter and better edited than anything that comes afterwards. The road race, in which the competitors advance through countless backdrops and Speed has to deal with his brother's fate, features visual variety and several short-lived adversaries. The final Grand Prix? It's nothing. It's a couple laps around a track against other drivers we've never seen before as the evil Royalton fumes and looks uncomfortable. The movie starts with a bang and ends with a whimper and that's flaw that I put on the Wachowskis as writers, but also on editors Roger Barton and Zach Staenberg, whose job it is to recognize the flow of the movie as a whole.

In the rather lengthy period of time that I've been writing this review, adding a sentence or two per day, I've seen several reviewers who have gone all excitable about how the movie is a video game, a comic strip, a fantasy that defies laws of gravity. I don't think any of those things should be even vaguely taken as negatives on their own. But even if a movie isn't at all bound by reality, it has to be bound by other realities:

1)A kids movie can be a video game, but it can't be 130 minutes long unless you have a story to tell.

2)If you have a story to tell, it can't peak at the beginning and become increasingly less interesting.

3)If your protagonist isn't much of a character and you don't have any sort of antagonist, you're not going to get people invested in seeing one succeed and another fail.

4)It's OK to cotton to Asian markets if you think your movie will play best abroad and probably casting certain roles to appease those markets is OK. But just because somebody named "Rain" is a pop star in Korea doesn't mean that casting him in an English speaking role is actually a good idea.

5)Matthew Fox can make exactly one facial expression, that pinched glower that says, "I have daddy issues!"