Take Me to the Pilots '08: CBS Comedies 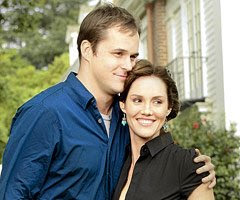 [As per usual: These are NOT reviews of the CBS pilots. These are first glimpses and impressions of pilots that may change dramatically -- casting, plotlines, sets -- before they hit the air this fall. Again... NOT a review. Heck, I've already been told by two people that my first impressions of "The Ex List" are wrong, so who knows?]

1)Gandhi is funny. Both "The Ex List" and "Project Gary" have jokes about the Indian leader. The jokes are very very different.

2)CBS Thinks Minority Actors Can't Act. In reality, network TV is uncomfortable with minorities. It isn't just that all of CBS' leads are white, but all of the second and third bananas are white. Did CBS learn the wrong lesson from the failure of "Cane" last season? Interestingly, each and every CBS pilot seems to have a random ethnic fourth banana, half-hearted semi-token casting in which a minority has been cast color-blind in a role that otherwise wouldn't have needed to exist at all. You have Amir Talai in "The Ex List," Tim Kang in "The Mentalist," Al Madrigal in "Project Gary" and, stretching things quite a bit, Tamara Mello in "Worst Week." Things are so bad that on "The Ex List," Elizabeth Reaser's character doesn't even have a Black Best Friend. How can she possibly hope to find love without one?!?!? The two leads in "Eleventh Hour" are both white and the original cast of "Harper's Island" looked to be 95% white, though that may change. ABC and NBC haven't done much better this development season, though FOX and The CW have hints at diversity. It continues to amaze me that the networks don't see this as a bigger problem.

Anyway, my first impressions of "Worst Week" and "Project Gary" are after the bump.

Show: "Worst Week" (CBS Comedy)
The Pitch: "Alexander's Terrible, Horrible, No Good, Very Bad Day: The Sitcom"
Quick Response: My instant reaction is that "Worst Week" is an ABC comedy, with a single-camera aesthetic and willingness to bend structure that would fit in perfectly between "Jake in Progress" and "Notes from the Underbelly." That yields a minimum of two obvious problems: The first is that "Worst Week" is on CBS, a network that still believes in the multi-camera laffer (a belief that, based on TV comedy ratings these days, has been validated). The second is that "Jake in Progress" and "Notes from the Underbelly" are both dead, as is nearly every ABC comedy from recent years not named "According to Jim." It's hard, then, to feel all that confident about "Worst Week." That doesn't mean that "Worst Week" is unfunny. It has a frenzied pace that for a pilot yields a slew of guffaws, but I don't really expect it to sustain for an actual series. The pilot takes place over less than 24 hours and finds our hero -- likeable lug Kyle Bornheimer, whose slightly cross-eyed exterior belies a sort of Patrick Warburton meets Richard Kind appeal -- getting barfed on, running around in a plastic diaper, urinating on a goose and all manner of other humiliations. Bornheimer has a refreshing lack of ego, which is just about all that the situation really requires. He's surrounded by capable support, particularly Erinn Hayes, who has proven in both "The Winner" and the episodes of "Kitchen Confidential" that never aired that she's eventually going to be a sitcom star. Or at least that's what I believe. America doesn't know whether or not to agree with me. The casting of Hayes' parents -- Kurtwood Smith and Nancy Lenehan -- is spot-on, but perhaps *too* spot-on. Smith playing maternal menace and Lenehan doing scatterbrained maternity is just a wee bit predictable. I mean, if you're dating a girl and her father is Kurtwood Smith, you have to expect a certain amount of thin-lipped disapproval. That doesn't mean both actors don't do it well. The pilot leaves some doubt as to how future episodes will be structured. Will each episode show an awkward day in the main character's life? Is the second episode going to pick up instantly the following day and try packing a season into a single week? Do other characters get to have bad weeks? And will Tamara Mello be back? I don't know if I've seen her since "Popular."
Desire to Watch Again: Medium. "Worst Week" isn't all that smart or particularly innovative, but it's well-enough-executed. I'll absolutely be curious to see how well it delivers its second time out.

Show: "Project Gary" (CBS Comedy)
The Pitch: "The Somewhat Reheated Adventures of Old Gary"
Quick Response: I don't want to question the wisdom of CBS' programming executives, but it's clear to me that "Project Gary" belongs on Monday night after "Two and a Half Men" and "Worst Week" belongs on Wednesday (if not, as I've already said, on a different network). Yes, "Project Gary" has tons of thematic similarities to "The New Adventures of Old Christine" -- post-divorce family blending and life restarting -- and yes the current schedule gives "Worst Week" a better chance to survive. But the single-camera "Worst Week" is going to look even stranger after the uber-traditional "2.5 Men," while "Project Gary" is as familiar and sitcom-y as it gets. Just about every second of the "Project Gary" pilot feels like a retread, from the central premise, to the annoying kids to the prefab sets to the obnoxious canned laughter at jokes that aren't all that funny. Jay Mohr does his shtick -- though, interestingly, nothing in this character plays to any of his pre-existing strengths -- and Paula Marshall is almost dangerously unlikeable, which is the fault of the character and not the actress, I might add. The sitcom kids are instantly annoying in predictable ways (The daughter's a budding leftist and the show's a socially awkward geek!) and Jaime King playing against blonde space cadet type (something she's done VERY well in the past) leaves her character without any kind of definition. Even though Larry Miller shows up and instantly nails two or three punchlines and gets the pilot's only real laughs, I don't know what jumped out for CBS here. Did the world really need another "War at Home"?
Desire to Watch Again: Low. I'll watch a second episode, just because CBS is my beat.
Tweet