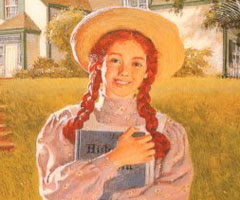 Did you miss me?

I've been off the grid for a while. There were three weeks of Press Tour, followed by Comic-Con, followed by a desperate attempt to meet a series of last minute deadlines for Filter. In the past month, I've seen exactly two movies -- "Superbad" and "We Own the Night" -- and I haven't been able to blog on either of 'em... It's my goal to get a blog post up for "Superbad" before the movie's actually in release this Friday. Gotta have goals.

I did, however, get an actual vacation. Seven days of sun, Kosher shellfish and Anne of Green Gables memorabilia in Prince Edward Island. So while I didn't see any movies last week or even watch a single full episode of TV, I did read five books, which would really impress you if you knew the pace at which I read.

They weren't exactly intensive or scholarly books I read, of course. They were exactly the kind of books you're supposed to read if you're on a beach and you already panicked to finish "Harry Potter and the Deathly Hallows" in anticipation of inevitably ubiquitous spoilers at Comic-Con (a concern that was ultimately overblown). Actually, as I think about it, I mostly read books that are going to become movies later this fall.

I read Richard Matheson's "I Am Legend," a nifty vampire yarn I should have read when I was 12 as a way of knowing just how totally Stephen King (my literary idol of the time) was ripping off Mattheson's prose style. I zipped through Scott Smith's "The Ruins," a chilling read, though I may not be tired of Smith's by-rote fatalism after this book and "A Simple Plan." I plowed through Richard Yates's "Revolutionary Road," a book I probably should have read long ago, one that's almost sure to be slaughtered by Sam Mendes despite the note-perfect casting of Kate Winslet and Leonardo DiCaprio in the lead roles. I read my third Cormac McCarthy book of the year in "No Country For Old Men," which has me eagerly anticipating the Coen Brothers' latest flick. And I also wasted little time going through Neil Gaiman's "Neverwhere," just because it happened to be in the pile of available options.

Whew. Anyway, I'll try to get my blog on again a bit later in the week, but I wanted to reassure my half-dozen readers that this space hasn't gone fallow.
Tweet