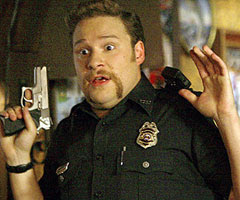 "Superbad"
Director: Greg Mottola
Fien Print Rating (Out of 100): 69 (I'd actually have gone with something a point or two lower, but I'm happy to honor the low-brow sensibility of the film)
In a Nutshell: An absurd percentage of media reporting is just trendspotting and when the media catches hold of a cover-all catch phrase that it (we?) likes, it rides that sucker til the pony collapses and dies. I've never been as sick of a reductive phrase, for example, than I am of "Torture Porn," which has become critical shorthand for dozens of disparate movies that both do and don't deserve to fall under the heading.

Anyway, that's just me thinking out loud. Any suggestions?

Follow through after the bump for my thoughts on "Superbad."


I saw "Superbad" almost a year to the night I caught last summer's underrated "Accepted." I caught both films in early screenings at Comic-Con, which meant that both films were being screened for their core audiences. And both comedies were darned well-received. "Accepted" wasn't a smash hit or anything, but its $36 million gross far exceeded its budget.

Check the Zap2it Comic-Con blog for my initial reaction to the movie (some of which will be repeated below) and some of the funnier moments of the post-film Q&A.

Because I liked "Accepted" -- it's loose, rough and far funnier than it has any right to be, given its pedigree -- it isn't damning "Superbad" with faint praise to say that the new flick is far, far superior in every way. It's the story of three guys who would traditionally be depicted as losers -- Hill, Michael Cera and Christopher Mintz-Plasse -- who attempt to acquire alcohol to secure their entrance to a key pre-graduation party and, hopefully, into the undies of a trio of previously unobtainable women -- played by Emma Stone, Martha MacIsaac and Aviva.

Even by "Porkys" standards, "Superbad" doesn't have much of a plot, but the script by Rogen and Evan Goldberg is magnificently digressive. The characters are on a Rabelaisian journey in which the specific events hardly matter. What matters are their conversations along the way -- the lewd, rawkus, inappropriate, occasionally brilliant conversations that feel distressingly believable and familiar. The movie is as raunchy and stupid as any 15-year-old could hope to see (assuming they buy tickets for a less R-rated movie and sneak in), but Rogen and Goldberg are stealth-smart and the film's love of language is always evident. Greg Mottola's direction is focused on making the movie look as jagged and naturalistic as possible, but mostly letting the comedy breath.

The thin narrative (and its over-long 114 minute running time) and aforementioned naturalistic visual style combine to keep "Superbad" from feeling like a "whole" movie at times, certainly when compared to the Apatow written-and-directed "Knocked Up" and "Virgin." While the best parts of those two films were still just the scenes in which the main characters sat around and shot the shit, you left with a sense that a full story had been told and that, occasionally, the resources of the cinema had been invoked. "Superbad" is mostly a string of those shit-shooting moments strung together toward a conclusion that isn't quite as satisfyingly heartwarming as it thinks it is. As such, it's very possible that "Superbad" is a funnier movie -- laugh-for-laugh -- "Knocked Up." It's certain to inspire repeated viewings and there's a good chance that its dialogue will be repeated and woven into the overall vernacular to an extent not seen since "Napoleon Dynamite" (an awful movie that totally could be called "Nerd Porn").

Although not quite as loaded with Apatow-friendly cameos as "Knocked Up," "Superbad" still features folks like Martin Starr and David Krumholtz in small roles, while Carla Gallo is the center of one of movie's most memorable scenes as a particularly aggressive dancing girl.

Now why, I ask you, isn't Sony using my pull quote "A rough-and-raunchy tribute to being geeky and white." Why?!?
Tweet