MovieWatch: "Harry Potter and the Order of the Phoenix" 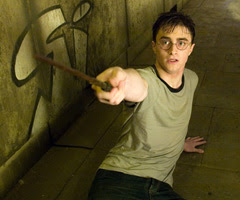 "Harry Potter and the Order of the Phoenix"
Director: David Yates
Fien Print Rating (Out of 100): 68
In a Nutshell: [Before getting to my wildly out-of-date review (I've been BUSY!!!!), I've gotta ask: Am I the only one who can't handle 3-D? Physically, I mean. I'm going to blame my astigmatism or something, but even with the newest technology and the snazzy new glasses, 3-D still makes my eyes water and my head throb and the actual payoff isn't close to worth it. For a movie like "Harry Potter and the Order of the Phoenix," that wasn't a huge problem since only the last 20 minutes required the use of glasses, but when I hear that James Cameron is going to force me to watch "Avatar" in 3-D, my brain already begins to hurt. That aside, I saw the not-so-new Potter flick at the IMAX screen at Jordan's in Natick, Mass, which happens to be one of the oddest places I've ever seen a movie. No, it's still not as odd as the outdoor theater in Athens where I kept being distracted from "The Sweet Hereafter" to look up at the Acropolis, but there's something darned weird about marching through a furniture store to get to a movie. Not quite as big a screen as what you'd get at Los Angeles' fancier IMAX theaters, but incredibly comfortable seats and appropriately bone-rattling sound. But enough of that digression...]

As everybody who hasn't spent the past month at Press Tour, Comic-Con and on a remote island in the Atlantic may already know, "Harry Potter and the Order of the Phoenix" is a nice rebound for the franchise after Mike Newell's aggressively bland "Harry Potter and the Goblet of Fire." I confess, before continuing, that I'd heard enough negative buzz about the movie from people I respect that my expectations were properly lowered. Thus, I enjoyed large parts of "Harry Potter 5," even if its 3-D enhanced climax may have been largely wasted on me.

Follow through after the bump for any additional thoughts...

To start with, I didn't much care for this particular book. It had a distinct beginning-of-the-end feeling wherein it was the first of Rowling's novels not to be essentially self-contained. It lays an awful lot of groundwork over a ton of pages, but its storytelling is really scattershot. Michael Goldenberg's adaptation is surprisingly smooth, then, eliminating large plot strands without causing me to bend my memories to recall what had been trimmed, at least not more than once or twice. Goldenberg's script can't change that "Order of the Phoenix" is all about transition rather than destination, but I didn't feel like I'd wasted my 135 minutes.

If I were to list the things I most appreciated about "Harry Potter and the Order of the Phoenix," I'd have to start with its occasionally inspired glimpses of realism, for which I largely credit director David Yates, a respected TV helmer with no experience at all in films of this scale. The movie's opening sequence, a Dementor attack in a London suburb, may be one of the most cinematic moments in the big screen franchise to date -- the haunting images of outcast Harry at a playground enhanced with the threat of casual teenage cruelty, rather than anything supernatural. Even after that first scene, though, Yates took the time to remind viewers that the universe of Harry Potter is just on the outskirts of the Muggle world that the rest of us inhabit.

That being said, "Harry Potter 5" is the darkest Harry Potter yet!!! Sigh. That's not even necessarily true, but as the actors have aged, they've been allowed to let their performances get just a bit more tortured. Or at least Daniel Radcliffe has, mirroring the book-by-book transitions that took Harry from an innocent boy to an increasingly mopey and annoying teen. Since Radcliffe is generally more believable playing Harry as a whiny pill than anything human, this is a good thing.

The other kids have matured in ways that have altered how their characters can be depicted. For example, with Rupert Grint through the worst of his awkward phase, Ron seems a bit more present in this movie than in the last one, ditto with Matthew Lewis' Neville, who I feared might vanish from the franchise entirely after puberty struck. You'll notice, though, that the camera can't afford to linger very long on Tom Felton's Draco Malfoy. Emma Watson continues to be good enough as Hermione that I wish Rowling hadn't essentially cut her character adrift in the closing books.

England's finest actors continue to be wasted in this franchise in near-record numbers. Alan Rickman and Gary Oldman have the best moments here, but folks like Maggie Smith, Michael Gambon, David Thewlis, Jason Isaacs, Brendan Gleeson and Emma Thompson have rarely seemed less valuable. Imelda Staunton is the biggest new adult addition and despite being perfect casting, her Dolores Umbridge feel even more one-note on the big screen than she was on the page. Helena Bonham Carter also joins the cast as Bellatrix Lestrange and manages to play the part exactly the way you'd think Helena Bonham Carter would play it, which may or may not be a compliment. I look forward to seeing a bit more of Natalie Tena's Tonks as well as George Harris' Kingsley, since both of those characters have increased profiles in the final chapters.

The movie's best new piece of casting, actually, is Evanna Lynch, who makes a rather amazing Luna Lovegood. Somehow a character whose winsome quirkiness always irked me in the books felt human and Lynch's reactions stole nearly every one of her scenes. I also look forward to seeing more of the mostly CG house elf Kreacher in the final installments.

How about the 3-D part of the IMAX experience? My moviegoing partner had seen the movie in 2-D and she said that it was more probably more exciting in its enhanced form. Certainly the hail of falling prophesy orbs and the shattered Ministry of Magic windows got a boost. The climactic showdown between Voldemort and Dumbledore (not really all that climactic in a general sense, but the movie had to end somewhere) probably played better with sparks flying into the audience. But darned if my head wouldn't have felt better if I could have just watched those last 20 minutes without the huge glasses that made the entire audience look like deceased Old Navy pitchwoman Carrie Donovan.

But at least I got out to see a movie. I still have a ton more catching up to do once I return to Los Angeles.
Tweet