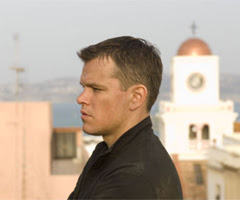 "The Bourne Ultimatum"
Director: Paul Greengrass
Fien Print Rating (Out of 100): 76
In a Nutshell: When listing my favorite films of 2004, I ranked Paul Greengrass' "The Bourne Supremacy" as my 8th favorite movie of the year and it might have been higher. The film had a perfect nihilistic ending, with our hero walking off into the snowy streets of Moscow after *not* killing somebody. Then Greengrass and company had to go and mess with things, tacking on a sunny and relatively upbeat ending in New York City, wrapping up the story and opening things up for a sequel. FEH!

On his commentary track for "Supremacy," Greengrass admits that they had trouble coming up with the right conclusion and that what eventually made it on screen was the product of extensive group-think, sort of an uneasy consensus.

For my money, the most satisfying thing about Greengrass' "Bourne Ultimatum" is that it somehow manages to validate the last scene of the earlier movie. The bland coda to "Supremacy" and reshot and repurposed in the middle of "Ultimatum" and suddenly the scene has meaning and context, suddenly it's another mind-game in a franchise full of mind-games. If I believed for a second that anybody wrote the original scene intending to bring a new spin to the sequel, I'd be impressed. But I don't. And actually I'm even more amazing and pleased that in preproduction on "Ultimatum" somebody realized that they could salvage what went wrong on the earlier movie.

The rest of my musings will be after the bump.

[While I may have already thrown out a few spoilers for "The Bourne Supremacy," I'm gonna go into "Bourne Ultimatum" spoilers from here, so be aware...]

If I prefer "Supremacy" and maybe even "Identity" slightly over "Ultimatum" it shouldn't take away from what has now become cinema's most consistent action franchise, a series so reliable that it disappoints me to hear talk of ending things at a trilogy. I understand that they're rolling the dice with any subsequent films, practically begging for a let-down, but so far the "Bourne" movies have been exemplary in terms of using the finest actors and craftsmen in the industry in the blockbuster field. When the summer of 2007 is weighed in the balance, most of the sequels well have to go in the "sucked" category, with "Harry Potter 5" and "Die Hard 4" going under "better than expected," but only "The Bourne Ultimatum" goes down as "darned good."

I guess I felt like the story of "Bourne Ultimatum" tied everything up too neatly. I preferred "Supremacy" with its "drop you in the action/leave you in the action" pseudo-arc. The friend I saw the movie with said he preferred that "Ultimatum" told a full story and that "Supremacy" had problems standing alone, but I liked the "Empire Strikes Back"-ness of the middle installment. The less I know about Jason Bourne, the better, it turns out. Damon's performances in these movies may play the same single, intense note, but to my mind that makes the character every bit as instantly recognizable and iconic as Eastwood's nameless Western heroes. We never wasted time in "The Good, the Bad and the Ugly" trying to figure out the backstory for Eastwood's character and I don't know that Bourne is more or less watchable knowing that he may or may not have had some sort of past with Julia Stiles' Nicky.

I also continue to love that the "Bourne" movies are a leftist inversion of Eastwood's Dirty Harry films. As many killers as Harry Callahan tracked down, the real villain was always the bureaucracy that kept making it harder for him to shoot first and ask questions later. Jason Bourne, though, is faced by a government cabal that, thanks to 9/11, can now operate without a shred of accountability. Bourne doesn't want anybody dead. He just wants a little government oversight, some checks and balances, a few Congressional hearings. He was trained to be a heartless killing machine, but Bourne is a Big Government softie.

Lost in Greengrass' gift with stomach-churning car chases and action sequences is the fact that he doesn't require millions in smashed automobiles and mangled stuntmen to create a tense action sequence. For me, the best scene in "Ultimatum" was Bourne attempting to navigate Paddy Considine's intrepid reporter through London's Waterloo Station and away from intrusive CIA agents, ubiquitous cameras and one nameless assassin. In addition to making me want to hop on the Tube to Waterloo Station and then head over to the National Theatre to see a show, the sequence worked entirely because of Christopher Rouse's editing, John Powell's score and Greengrass' unparalleled ability to create disorientation without ever sacrificing a sense of space and geography. Whether on a scale model of United 93 or on the streets of Tangier or Paris, Greengrass is happy to mess with the viewer's head, but he never loses a clear grasp on where the movie is taking place.

But for all of my admiration of Greengrass' work, I loved the stylistic transition for Doug Liman to Greengrass between the first and second films and I wish the franchise had gone to a different indie director for the third, just for fun. How about urging Alejandro Gonzalez Inarritu to get off his mopey, self-righteous high horse and make an international action movie? What about seeing if Gus Van Sant can take his experiences with Damon to the not-so-logical next level? What would Florian Henckel von Donnersmarck do with a paranoid studio feature?

Anyway, since I'm a month late to catching this movie, I assume that all of the observations I think are so clever have already been made. So I'm gonna stop here.