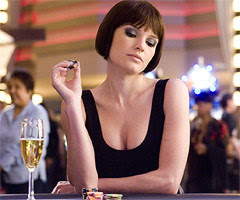 "21"
Director: Robert Luketic
Fien Print Rating (Out of 100): 51
In a Nutshell: I want to get this out of the way, because it's a stumbling block in my brain. Ben Mezrich's non-fiction account of this story, "Bringing Down the House" is about a group of geeks from MIT who win a lot of money counting cards as a team in Las Vegas. Until two-thirds of the way through the book all of the members of the card counting team are part-or-all-Asian. So Hollywood adapts Mezrich's book and it's about two attractive white kids flirting.

Don't worry. I'm gonna ramble more about race (and maybe the movie) after the bump.

None of it would bother me except that it isn't just a casual observation in the book that every member of the core counting team is a minority and that the addition of two white folks to the mix is actually a major groundswell. It's a major plotpoint. There are points being made both about how Asians make up a higher proportion of casino high-rollers (not in the movie, where they're even absent in the backgrounds of shots, as our mostly white team keeps sitting down at high-roller tables being played at by a mostly white clientele), but also about how the mostly white pit crews and casino managers treat or notice Asians (and Asians of different genders differently as well). It's not an accident.

Hollywood here would say "But there aren't any marketable Asian actors of the right age and type to play the right role." First off, bullshit. Second off, find one. "21" was never going to be sold on its star-power. I don't care if the teenage girls loved "Across the Universe," Jim Sturgess isn't going to put butts in the seats for this movie. And, if we're being frank, does anybody think that Kate Bosworth has an iota of box office pull? You already have producer Kevin Spacey playing a character described in the book as "dark-skinned -- either Persian or Latino." Let Spacey be our required big-name white replacement. At that point, I'd have gone to the cast of Justin Lin's "Better Luck Tomorrow" and cherry-picked a half-dozen of its lead actors, or else gone to Lin's casting director and said, "We're too stupid and racially blinded to cast our own movie, please help us." There are no bankable young Asian actors or actresses in Hollywood? This movie should have been a perfect chance to find one or two or three young Asian actors with talent and looks and put them at the head of a vehicle that really sells itself. But somebody must have been terrified by the idea of having to sell "21" with actual Asian stars to audiences in Des Moines.

My other concern would be that the producers cast either Sturgess or Bosworth in their role and then subsequently determined that that one move required casting another white actor for a potential romantic pairing. Perish the thought that Sturgess should get it on with an Asian girl or that an Asian dude would have simulated sex with Kate Bosworth. If black-on-white romance is still something that barely happens in studio movies without it being discussed, yellow-on-white romance is far, far, far less common still.

Sorry to get to amped up about this. But seriously, I kid. There are totally two or three Asians with speaking lines in this movie. Huzzah. Progress! Obviously Hollywood doesn't have a race problem! I mean, the industry has B.D. Wong! And yes, there was a TV movie about Marco Polo last year which co-starred Brian Dennehy as Kublai Khan. No, Hollywood doesn't have a race problem.

The screenplay by Peter Steinfeld and Allan Loeb really just uses "Bringing Down the House" as a starting point, even though Mezrich's book is mighty cinematic without augmentation. So maybe it was Steinfeld and Loeb who decided they wanted to tell a whiter story than Mezrich had, what with Mezrich being hampered by "The Truth."

Mezrich and his book get a "based on" credit, but it's an obligatory credit and I figure Mezrich can watch the movie with some satisfaction knowing that NOTHING that's wrong here is his fault.

I don't wanna make it sound like Mezrich's book is some sort of sacred masterpiece of investigative journalism or anything. It's just a wicked fun pageturner. On one hand, it's a slight psychological portrait of its main character -- who doesn't have an iota in common with the movie's protagonist -- but it may be just as much a slight anthropological study of Las Vegas and the relationship between the people who live there and work in the wide variety of service industries and the people who come to visit all assuming that they're going to beat the system.

Steinfeld and Loeb have just reduced the story even more into to a simple Faustian tale. Sturgess' Ben is a genius, but he's also a townie and a nerd. His life appears to lack glamour and it also lacks the money necessary for him to progress onto Harvard Med. So when he gets his deal from The Devil (embodied by Spacey, who reads every line of dialogue with a brilliantly forked tongue), he jumps on board. Will the glitz be everything he dreamed of? Duh. Will he get carried away and lose everything he once held dear? Duh. Will he come to realize, like every ill-fated dreamer since Dorothy Gale that if he ever goes looking for his heart's desire again, he won't look any further than his own back yard? Well of course. The movie has been so conventionalized that nothing is surprising or fresh.

Because the villains in Mezrich's book are unseen agents of a P.I. firm, the screenwriters have whipped up a fictionalized main villain, a part the casting director didn't hesitate to go ethnic with. So Larry Fishburne pops up every once in a while to glower and complain about facial recognition software. Thanks to the presence of that character, "21" is able to have a conclusion that includes a rip-roaring and ludicrous chase scene as the movie deteriorates into silliness.

Since the movie is all about a sort of surface gloss, director Robert Luketic is in comfortable territory. Since "Legally Blonde," Luketic has never met an explanatory montage he didn't like and "21" is one voice-over, soundtrack-fueled montage after another. As a result, the pacing rarely lags. Luketic also does a decent job of visualizing the blackjack tactics and trying to make it possible for really dumb viewers to get the basics of card counting. Or to believe that they understand the basics.

Led by Russell Carpenter's cinematography, the movie captures some recognizable aspects of both Boston in the winter and the sensation of playing blackjack in Vegas til dawn and stumbling out into the light and being confused by where the time (and money) went. The movie is rated PG-13 and every bit of its depiction of Vegas feels sanitized and prettied up, but just as Hollywood would rather have bland white kids on the screen, they'd like for bland teenagers to be able to plunk down their money, even if it reduces Vegas to a place where nobody ever swears and the strippers dance fully clothed.

I don't want to discuss Sturgess only in terms of his absence of ethnicity. I should also mention his absence of personality. He combines the blandest, most earnest aspects of Wes Bentley and Jake Gyllenhaal into an attractive package that barely registers. In some scenes he's try to do a Boston accent, while in others he's just struggling to cover his British accent. Neither the Boston nor American accent is very good.

As for Bosworth, this is the sexiest I've found her since "Blue Crush," probably. But the best part of her character is that the writers haven't attempting to give her a single line of dialogue to defend her position as another MIT genius. It's a true relief that she never has to prove her IQ to anybody, because that could have been funny. Carpenter does a marvelous job of photographing her, so that even if some of the actors look believably like they might have spend a Boston winter out of the sun in the library, she looks like she never forgot to moisturize.

Is there any reason why Aaron Yoo, comic relief and then oddly absent Choi, couldn't have played the lead role in this movie?

Or why Liza Lapira couldn't have been the female lead?