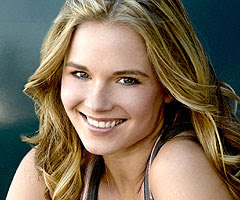 Since last week's Lennon-McCartney Night was so successful -- I'm not being sarcastic there, though I know it's hard to tell sometimes -- it's back to the well once more on Tuesday (March 18) night's American Idol, with a Beatles theme. Would lightning strike twice or would the second time on the huge Idol stage not be the charm? Let's find out, shall we?

Singer: AMANDA OVERMYER
Song: "Back in the USSR"
My Take: Mommy, what's the USSR? I'm very glad that Amanda isn't rockin' the striped black-n-white pants this week, opting for a tight vest and straight-forward jeans instead. From the beginning, this is a more mumbly performance from Amanda. This isn't an Archuleta situation where she's unsure of the words. She just doesn't decide they matter until at least the half-way point, but since a disheartening percentage of the American Idol audience couldn't tell you what "U.S.S.R." means anyway, that isn't a disaster. The light show is lively, Amanda makes solid use of the stage, she rarely ventures outside of her limited vocal comfort zone and the audience seems happy. I'd have preferred to hear her do "Helter Skelter" or any number of later, edgier Beatles tunes, but I didn't get a vote.
The Lion, Scarecrow and Simon Say: Randy thinks it was the perfect song choice, but he only gives her a 7-out-of-10 for the pitchy beginning. Paula calls Amanda "the quintessential, authentic who-you-are." Was that another Horton Hears a Who plug? For Simon, it was what it was. He's decided to get tired Amanda. This is the part where he tells Amanda to mix things up. Then next week she changes things up and Simon says, "No no no, I didn't see any of you in that song at all." "Ballads are boring," Amanda scoffs.

Singer: KRISTY LEE COOK
Song: "You've Got To Hide Your Love Away"
My Take: Last week was a hilarious disaster for Kristy, a disaster I mostly blamed on the arrangement of the song. But the Idol producers like Kristy (or like being able to torture her on elimination night), so she gets to take viewers through her personal photo album -- She loves horses and dogs... Love her, America! -- before her clip package. If she made "Eight Days a Week" too fast last week, she went the opposite direction tonight, turning "You've Got To Hide Love Away" into a slowed down country power ballad. It isn't inherently a bad strategy, but did the arranger of the song ever listen to Kristy's voice? She doesn't have a very good low register and the song keeps dipping into deep notes where she vanishes entirely. It moves high at the end and she does, predictably, sound better. Why is it that Chikezie found a way to take the Beatles down a country path last week, but Kristy's clueless?
The Lion, Scarecrow and Simon Say: Randy doesn't like the arrangement and wanted more melody. Paula thinks this is the best Kristy's ever looked -- and in a short skirt and cowboy boots she's bound to be matching somebody's fetish -- but still calls it "safe" and "good." Simon comments that she isn't a good performer, prescribing hypnosis and describing her as musical wallpaper. He cautions that she's only memorable when she's terrible. Kristy warns Simon that she can blow him out of his socks. Ummm...

Singer: PRESUMPTIVE AMERICA IDOL WINNER DAVID ARCHULETA
Song: "The Long and Winding Road"
My Take: I guess if you had a blunder like Presumptive American Idol Winner David Archuleta did last week, it's better not to ignore how bad you were, so David's entire clip package is dedicated to how much he stunk. So much for that theory about how you have to have a short memory in this business. In his spare time, David appears to have been cutting his own hair. He now looks spectacularly elfin. Or maybe like a leprechaun for St. Patrick's Day? He's got the lyrics down this week, looking relieved and ever-so-humble at the end. I'm not going to argue with the basic vocals, but it's another uber-serious, mega-sincere performance from David. Would anybody like to see some evidence that he's having fun with this?
The Lion, Scarecrow and Simon Say: Randy requests that we check it out, baby. "David Archuleta's brought the hotness back to his game," he yells. For Paula, it was his most exciting and wonderful performance, raving about his ability to rise above adversity. I'm sorry, but one bad performance isn't "adversity." Ask one of the performers who have spent a decade living hand-to-mouth to try to make a living about "adversity," OK Simon calls him amazing and raves that it was a master class.

Singer: MICHAEL JOHNS
Song: "A Day in the Life"
My Take: Can we agree that Ryan's awkward product plug for iPhones and then Coke was disgusting? Anything that makes me sorry for Ryan is bad. The arrangement is initially so sleepy that the only time I perk up is when Michael mangles his attempted falsetto. Even when the song picks up and the camera starts spinning around Michael in nauseating fashion, it's a lackluster cover of what is, I agree, one of the Beatles' finest moments. Something's wrong with Michael, because this shouldn't have been so hard. The indiscriminate audience cheers, but Michael looks chagrinned.
The Lion, Scarecrow and Simon Say: Randy wants to see more of Michael's big old voice, closing with "It wasn't one of your good ones." Paula attributes tonight's problems to their earpieces and makes sure that viewers know Michael was spectacular in rehearsal. Simon says it was a mess, comparing him negatively to David. In a brilliant moment, Ryan asks a sheepish Michael to show the camera his earpiece. The problem? He's not wearing an earpiece. Michael makes the sympathy play by saying that the song was a favorite of a deceased friend.

Singer: BROOKE WHITE
Song: "Here Comes the Sun"
My Take: I believe Brooke just described her performance of "Let It Be" as one of the greatest moments in the history of the world. Brooke has a sunny yellow dress on and she has an orange sun rising on the screen behind her. I get it. The sun's coming. Where? Here. But without a guitar or piano, she's laughably unsure about what to do on stage. I find myself thinking of Abigail Breslin's performance in Little Miss Sunshine as Brooke does a goofy little spin and occasionally waves her arms wildly, like Big Bird on acid. Why doesn't she make a big sun with her arms and start wiggling her fingers like she's making rays? She looks beautiful, but spastic. She ends with a close-up grin so cloying it may give millions of viewers diabetes.
The Lion, Scarecrow and Simon Say: Randy describes the performance as "awkward," as Brooke quickly apologizes for her spin and admits that moving isn't really her thing. Paula can't help but smile. She starts rambling about Brooke's low-notes. Simon says it was terrible. "It was wet," he says cryptically. Naturally, Brooke takes criticism like a gracious, sunny fairy. It's the most sincere acceptance of of criticism in the show's history. I half-expect Brooke to come down and pat Randy, Paula and Simon on their heads. Brooke is treating the judges and America like we're her children and she's our nanny.

For the full recap, head over to Zap2it's It Happened Last Night blog.