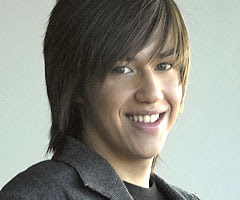 Tuesday (March 4) marks one of the most important nights of the electoral process. No, silly, not the Texas and Ohio primaries. It's the start of the final week of gender segregation on American Idol, before we integrate into the Top 12. How did The '80s treat the Top Eight Men?

Singer: LUKE MENARD
Song: "Wake Me Up [Before You Go-Go]"
My Take: Does Luke not understand that a big part of Wham's popularity (by "a big part," I mean "nearly all") was based on George Michael's charisma and performance flair? Luke seems to think that the world just loves a lilting falsetto. Vocally he's inoffensive and whiny, but his stage presence is dreadful. If you can't get the audience clapping along to this particular song, you're not even good enough to share the stage with Snoopy at Knott's Berry Farm and Luke is satisfied with standing in place and smiling. Only Luke could make me wish Robbie Carrico were still around.
Flora, Meriweather and Simon Say: Randy asks if he had a good time. Luke agrees that he did. Randy determines that he "kind of got it together in the end," minor corniness aside. Paula makes some icky reference to George Michael's shorts and says that she loves Luke's instrument. "I thought it was weak, a bit girly," says Simon, who adds that Luke has no chance of winning, much less making it to the Top 12.

Singer: DAVID ARCHULETA
Song: "Another Day in Paradise"
My Take: Or as I like to refer to him, "Presumptive American Idol Winner David Archuleta." At this stage in the game, we haven't had a winner so predetermined since Fantasia and Carrie Underwood basically ran the tables in Seasons Three and Four. Unless this David has also been stripping at gay clubs, I think he's going to be mighty hard to derail. Certainly as long as he sticks to ultra-serious issue-oriented ballads, how can anybody insult him? But let me try: Why did David bother with the piano? Did he play more than two notes? Talk about not-worth-the-effort. He should almost be penalized for misusing the prop. David's vocals are ultra-earnest and unremarkable, taking the least ambitious path through this Phil Collins standard. He's dull, but better-than-Menard.
Flora, Meriweather and Simon Say: Randy says this was like watching a concert, though it didn't show off David's "vocal prowess." Randy calls David on pitch problems -- Uh-oh, he's gonna get hate mail! -- but Paula loved this sign that David isn't a robot, that his imperfections prove his perfections. Yeah. That's what they prove. Simon warns David that he wants to avoid being gloomy. Simon asks to see David's fun side. David makes a plea on behalf of the homeless worldwide.

Singer: DANNY NORIEGA
Song: "Tainted Love"
My Take: First off, does anybody honestly believe that being tripped at the movie was Danny's most embarrassing moment? I sure don't. Second of all, has there every been a more fabulously campy performance in American Idol history than Danny's cover of Soft Cell? That's not necessarily meant as a compliment, but Danny's work tonight will certainly mobilize his fanbase. Sashaying around the stage with purple hair, a matching purple shirt, uncomfortably tight pants and the same gray-and-black scarf that seems to be making its rounds of the Idol men, Danny's husky whisper is either hilariously brilliant or just hilarious. This is the best performance of "Tainted Love" Hannah Montana could possibly give.
Flora, Meriweather and Simon Say: Randy's got a mixed review. He says Danny started a bit rough, but that he sold it by the end. Danny vows to be more confident in the future. Paula loves that Danny has a sensitive side to him and a spicy side also. She says that he looks fabulous, but tells him to lose the purple streaks. Simon thought it was horrible, "absolutely useless." Amidst much eye-rolling, Danny literally brushes Simon's words (or a symbolic representation of them) from his shoulder.

Singer: DAVID HERNANDEZ
Song: "It's All Coming Back to Me Now"
My Take: Hmmm... Despite a really strong performance last week, David Hernandez was probably suffering from low name recognition. The good news? Everybody knows who he is now. The bad news? Everybody mostly knows him as "that guy who gave lapdances to other men for money." I've never believed that there's no such thing as bad publicity, but if that's the case, this is a big boon for David. Meanwhile, I have my doubts that David's most embarrassing moment ever really involved a booger. It's not a very engaged performance from David, who refuses to embrace Meatloaf's inherent cheese. I don't know that Mr. Loaf should ever be taken quite this seriously, but beyond a few sharp notes, it's a fine vocal turn.
Flora, Meriweather and Simon Say: Randy liked the song choice, but thought David overshot some of the notes. Paula thinks David's finding his groove and getting into his niche. She compliments his vocals. David expresses his love. Simon says he prefers David as a Soul Man, but that he's 100 percent secured his place in the Top 12. We'll see about that.

For the full recap, check out Zap2it's It Happened Last Night blog.

And, as always, I write lots about Idol over at Zap2it's Guide to American Idol.