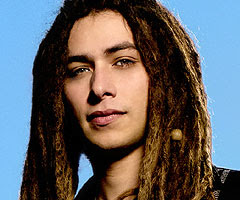 [I have this dream of someday doing an actual, real blog post again. Maybe soon. Perhaps I'll force myself to a bad movie this weekend?]
Tuesday (March 25) night's American Idol theme is Songs From The Year You [the contestants, that is, not me] Were Born. For Michael Johns and Carly Smithson, that could mean a third straight week of the Beatles, while for Presumptive American Idol Winner David Archuleta, that could mean one of the lesser singles of Hanson. Sadly, only one of those two possibilities was meant as a joke...

Singer: RAMIELE MALUBAY
Song: "Hearts Alone"
My Take: The producers have apparently tired of Ramiele's so-so brand of party karaoke, giving her the Opening Slot of Death this week and dressing her in The High Waisted Shorts of Death. Tonight's secondary theme, of course, is making viewers like me feel wicked old. I remember when this song when playing on the radio. It was in tune back then. Tonight? It's mostly flat. And sometimes sharp. And generally shouted. And delivered without an iota of movement on the stage. The conspiracy theorists will think this entire performance was part of the ongoing conspiracy to keep Kristy Lee Cook around. I just think Ramiele hasn't been very good since the first week of the Top 24.
Tinker, Evers and Simon Say Randy implies that it wasn't the right song choice and that Ramiele being under the weather isn't really an excuse. Paula, who also sounds like she's also sick, is glad that America has heard her sing, praising her bravery. Let's discuss Paula's black elbow-high gloves and bejeweled bracelets. OK. Fine. Let's not. Simon, feeling generous, doesn't think it was as bad as Randy did. He adds that since Ramiele skated last week after a bad week, this week should be OK as well. Ryan accuses Randy of being too harsh tonight.

Singer: JASON CASTRO
Song: "Fragile"
My Take: Happy Birthday, Jason. Never has my favorite Stoner Muppet appeared more frantically guided by his unseen puppeteer. His hands strum wildly across his guitar, rarely making music, but at least steering the rhythm. The lyrics are all mumbled and I seem to recall the Sting version having a melody instead of just a high nasal hum. Once again, Jason isn't singing a song that's nearly complicated enough to justify the raised brows, pursed lips and clenched eyelids. They have coaches on this show and if they could sort of teach Carmen Rasmusen how not to bleat like a goat, surely they can show Jason how not to wince and mug.
Tinker, Evers and Simon Say Randy loves the song and loves the Spanish touch, but he's still waiting to see that breakout vocal performance. For Paula, the lack of vocal range is Jason staying true to who he is. Simon, though, demands that Jason takes this more seriously, comparing it to somebody busking outside of a subway station. We warns him that he won't win if he doesn't do something more. Ryan asks Jason if he's taking it seriously. Jason replies, "Yeah." He asks why Simon might get a different impression. Jason replies, "Uh... I dunno."

Singer: SYESHA MERCADO
Song: "If I Were Your Woman"
My Take: Yes, Syesha. We've heard your baby cry before. Last time it was creepy and interesting. Now? Tired of it. Last week's somewhat over-praised version of "Yesterday" may have given Syesha the mistaken impression that she has a diva's voice, which she doesn't. The bigger the notes are, the more she sounds like she's shouting. For the most part, though, the song has been properly arranged to keep her right on the threshold of yelling, leading to a nice, solid vocal. I think there's an upbeat side to her that works better than this, that would show off her personality.
Tinker, Evers and Simon Say Randy says this was the best he's ever heard her sing, cheering that "We've got another competitor in the competition." Paula says this is the moment that Syesha flipped it and that she's now the dark horse. This time, Simon says that the end part wasn't as good as Randy thought it was.

Singer: CHIKEZIE
Song: "If Only For One Night"
My Take: After his first audition I said that Chikezie was giving me a Skinny Velvet Teddybear vibe, so I like the idea of him doing a Luther-by-way-of-Ruben cover. Chikezie has so much more range than the three singers who came before him. He has a smooth falsetto and rich low tones and his voice can work with anything. Does it work best with ballads? Probably not. Somehow the cheesiness inherent in Chikezie's wide-open approach to entertaining seemed less evident and more genuine with his more up-tempo Beatles performances the past two weeks. Just to get a better overall sense, I turned away from my TV and I absolutely enjoyed what I heard. I couldn't say that about Ramiele or Jason.
Tinker, Evers and Simon Say Randy thinks Chikezie was too old school, not hip and cool. Paula disagrees, raving that Chikezie's a throwback. Simon is right that the performance was cheesy, but at least he credits Chikezie with singing it well. He misses Chikezie's personality.

Singer: BROOKE WHITE
Song: "Every Breath You Take"
My Take: Brooke blunders the start of her song, pauses and starts over, but most people at home are probably going, "Doesn't she look so pretty with her hair straightened and isn't her mom a babe?" and didn't even notice. It's an appropriate song choice for a singer whose fans are right on the verge of getting stalker-ish. Credit Brooke for not letting her early stumble entirely throw her off, but I'm not sure she's hearing the piano properly, because she's trying to unnecessarily yell over it. It gets worse when the band joins her and she's suddenly trying to be heard over even more music. After last week, I doubt we'll never see her move again and it's great that she's able to make a song about stalking sound so sweet.
Tinker, Evers and Simon Say Randy loves the professionalism of her restart, but he isn't so enthusiastic about the song's second half. Brooke pats him on the head and assures him that it's OK to criticize her. Paula's pleased that Brooke has her own niche. Brooke pats her on the head and reassures her that it's OK to worship her. Simon thinks it would have been cooler without the band accompaniment. He's sure she'll be around for another week, though. Brooke pats him on the head and assures him that if voted back she'll gladly perform. Is everybody repeating how brave Brooke was for starting over as way of slamming lyric-botcher Presumptive American Idol Winner David Archuleta?

For the full recap, head over to Zap2it's It Happened Last Night blog...