NetflixWatch: "My Kid Could Paint That" 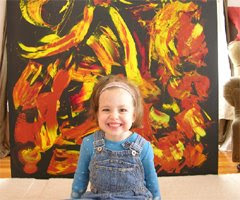 My Kid Could Paint That"
Director: Amir Bar-Lev
Fine Print Rating (Out of 100): 79
In a Nutshell: For most film critics, the easiest reviews to write are for the best and the worst films. You can use the words "awesome" and "brilliant" and "sucks" and "dreadful" over and over again, you can use flowery language to say the film is the best one since, well, the last great film you happened to see, or the worst thing you've seen since you stepped on a kitty tragically back when you were 10.

But there's a vast middle ground that gets a bit troubling, things that you're ambivalent on. About 90 percent of the things in that middle ground are just "Meh" films with "Meh" ambitions and "Meh" executions. But then there are the ones where you're at war with yourself as to how to approach them, films that you liked, despite your best instincts not to or that you hated, despite a begrudging admiration for many aspects. You sit down at your computer and you have a conversation in writing and merely finding a way to express your bisected reaction can feel like a triumph. But readers of reviews don't want fence-straddling. They want "Yes, it's worth your 10 bucks" or "Don't go to the theaters, but Netflix it" or "If you pass the director on the street, trip him." Hemming and hawing leads to more hemming and hawing, which leads to intellectual discussion and that benefits nobody.

And that's also the theme of Amir Bar-Lev's "My Kid Could Paint That," a frequently brilliant polemic that irks some of the same sort of viewers who hated the finale of "The Sopranos," people who say, if I dedicate "X" amount of my time to something, I expect a definitive payoff.

Follow through after the bump for my full review...

There are many ways a present-tense, verite-style documentary filmmaker can approach a subject matter.

You can start without a your story and say "Whatever happens, that's my movie." So you start by following five or six inner city Chicago basketball players and eventually you stick with the two whose lives are so dramatic no screenwriter in Hollywood could have made it up. And it works.

You can start with one idea and say, "We're making this movie, but if the story changes, we can change with it." That way you're making a concert film about the Rolling Stones, but when the Hell's Angels kill an audience member, you're prepared to make your movie something bigger than it was before.

You can start with one idea and say "I'm going to ride this pony til it dies and I've got blinders on to anything else." That's why Michael Moore's films bug me so much, often. He's all about surprising viewers and surprising his subjects, but he's incapable of being surprised or enlightened himself. He knows the answer before he begins.

But I kinda prefer the documentaries where the filmmakers begin thinking their story is simple, discover complications and then struggle to reconcile the point for which they started with the new direction. In this category, I'd put recent films like "Capturing the Friedmans" or "Fog of War," in which Errol Morris' desire to crucify Robert McNamara is thrown off by the unexpected moments where the guy starts making disturbing sense.

Sorry. That got rambling. With "My Kid Could Paint That," Bar-Lev heads up to Binghamton, New York to follow the bizarre media sensation around Marla Olmstead, a four-year-old girl whose messy paintings are being hailed as masterpieces and selling for thousands of dollars.

His story: Modern art is a weirdly subjective thing. Who decides what constitutes art? Is it aesthetic? Commercial? It's a fine angle, albeit reductive and overly intellectual. Sit down with a couple artists, with a couple egg-head reviewers and scholars. Have them look at Marla's paintings and go "If somebody determines it's art, it's art." If that had been the only story, nobody would ever have seen or heard of "My Kid Could Paint That."

The event that spins the story on its pivot is a "60 Minutes II" story that accused Marla's father, a frustrated former jock and current artist of either coaching her painting or of doctoring the paintings and improving them. The "60 Minutes II" report isn't particularly good journalism, sorry Charlie Rose. Its only real purpose is the creation of doubt, stopping short of answers itself. But it ends the honeymoon for the Olmsteads and leaves Bar-Lev unsure what he's movie is about.

And he remains unsure until the end. Is his job to go from impartial documentarian to investigative reporter? Is he supposed to be a part of the Olmstead family or part of the media machine that wants to bring him down? Is he the man the Olmsteads should want to be truthful with and open up to, or is he supposed to be a crusader himself and crush the family if that's what the story requires? Bar-Lev wavers with every second, putting much of his struggle on-camera, going from outside observer to co-subject of his own film. One can imagine an original version of the doc where he planned to edit out his voice and his shadow and his presence, to simulate objectivity, but in the new version, he's nearly as important as Marla so he's regularly heard and occasionally turns the camera on himself.

Some viewers will find that irksome. It isn't just that Bar-Lev is a bit smarmy and self-satisfied with the story he finds himself in the middle of. He knows darned well when his little project transforms from something that would have played on PBS to a theatrical release, but to my mind his own unspoken recognition of his film's commercial potential matches perfectly with Marla's story. In the beginning, he doesn't know who he's making the film for, it's for anybody would would possibly watch. Then in the middle he's making the film for the fans of muckraking expose mysteries, but then by the end, he's making the movie for himself.

But I've read some reviews saying that he was exploiting the Olmsteads, which is nonsense. The parents were welcoming the exploitation and Marla is marvelously oblivious. But then there are a few more critics who say he owes it to the viewer to take a side, to close the movie with "Marla Olmstead is a fraud and should be burned at the stake" or "Marla Olmstead is a genius and should be exhibited at MoCA" or even a return to his initial thesis, "Marla Olmstead likes pretty colors and abstract forms, but what does that mean?"

While it made a big splash at Sundance and was purchased by Sony Pictures Classics, "My Kid Could Paint That" never got a chance at the box office. It never played in more than 20 theaters and its domestic gross stands at $231,574, per BoxOfficeMojo. I never saw an ad for it or any promotion at all and facing all of those Iraq documentaries, it was never really in the discussion for the documentary Oscar.

With a running time of just over 80 minutes, "My Kid Could Paint That" is ideal for DVD, because one of the supplemental materials, a 30 minute combination of outtakes and after-the-fact footage, is the rare featurette that actually improves the movie you just watch. Some of the best footage is seeing the real people involved dealing with their depiction in the movie, seeing that the Olmsteads felt betrayed. But the best part is seeing the hints at different, more facile directions Bar-Lev could have gone. There are interviews with people from the Binghamton community who are conveniently and stereotypically baffled by the town's pint-sized celebrity. There's a bitter feminist artist who mocks Marla and derides her application for an art show because it doesn't speak to the female experience. It's all the stuff that would have had to support the movie if the "60 Minutes II" report hadn't come out. It's just another level of the storyteller's struggle.

Anyway, it's been too long since I posted something that wasn't a repurposed "Idol" recap from Zap2it. So I'm going to post this now.