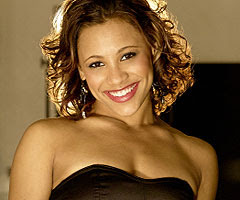 If you were a Hillary Clinton groupie, Tuesday was Ladies Night, but if you're an American Idol fan, the Women didn't come out to play until Wednesday (March 5). Last week, the '70s proved quite the challenge for the Top 10 Idol Women. Would the Top Eight do any better with the '80s?

Singer: ASIA'H EPPERSON
Song: "I Wanna Dance With Somebody"
My Take: Asia'H kicks off '80s Night with Whitney. It's a high energy number and after having her rear kicked by a power ballad last week, Asia'H is back in her comfort zone this week. This is about as simple as Whitney gets and it's still too big for Asia'H, but she succeeds in getting the crowd -- or at least Paula -- up and moving. Asia'H is a cheerleader, a bubbly and infectiously fun performer. She isn't about singing and watching her this week was fun.
Blossom, Bubbles and Simon Say: Yes, Randy. We know you recorded with Whitney. Randy thinks it was hot and that Asia'H proved she deserves to be here. Paula thinks she nailed it. Simon's not so enthusiastic, saying that "at best it was second-rate Whitney." Asia'H says, with proper humility, that she she's perfectly happy to be second-rate Whitney. Simon's right in pointing out that Asia'H didn't really grab the last note.

Singer: KADY MALLOY
Song: "Who Wants to Live Forever"
My Take: As my buddy Sepinwall points out, "My Prerogative" was an '80s song, but Britney Spears did an appropriately breath-y version a few years ago. If Kady goes home without ever having done a full song as Britney, it will be a tragedy of Idol-tragedy-level proportions (I don't wanna overstate the tragedy or anything). This is another awful song choice for Kady, who seems to have no concept at all of what will inspire viewers to vote for her. The answer? Something poppy and tarty, something Haley Scarnato would have done last year, completely with a Scarnato-ready outfit. Some of the early notes in her Queen cover are painful to listen to, even if she eventually improves. She may have a bigger voice than Asia'H, but she also isn't a balladeer. She ends nicely, but this really isn't what she needed after verging on elimination last week. She's hot and young and bubbly on tape, but she hasn't showcased that side of her personality at all.
Blossom, Bubbles and Simon Say: Randy thinks she did a pretty good job, but he doesn't completely understand the choice. Paula thinks this was Kady's best performance to date, praising the tenderness and softness in her voice. Simon agrees that it was last week, but he years to see her become less of a robot. Kady does a cute version of The Robot which shows, as always, her more appealing side. Simon forecasts that Kady may be in trouble and then snaps at Ryan when the host asks for clarification.

Singer: AMANDA OVERMYER
Song: "Hate Myself For Loving You"
My Take: After a shrieky and dreadful performance last week, Amanda's on more solid footing this week with Joan Jett. I like her on the verses, where she balances the shouting and singing fairly well, but she gets lost on the chorus, letting the backing singers carry her more than a singer with her set of lungs should really ever do. Stylistically, she looks much softer this week and with her skunk-streaks pushed back, she's prettier and less scary than she was last week. This is a welcome comeback, even if I'm not completely on board.
Blossom, Bubbles and Simon Say: Randy's totally pleased and says this is who she should be. Paula thinks Amanda's face is beautiful and says that she's still in love with her. Simon calls it fantastic, that it was the perfect song and she nailed it. He's overstating his praise, but the best part is when Simon mocks Amanda into smiling. No, her grin isn't comfortable, but it's still endearing.

Singer: CARLY SMITHSON
Song: "I Drove All Night"
My Take: While it requires me to admit that we watch The Pussycat Dolls Present Girlicious around the office, we were just discussing the other day at work that Cyndi Lauper is an underappreciated vocalist. Carly yells a bit more than Cyndi probably would have (but just as much as Celine Dion does), but she mostly does the song justice. Since shouting is seemingly inevitable for Carly, she needs to learn to do it without looking like she's screaming. She closes her eyes, wrinkles her nose, bares her teeth and generally looks constipated. There's never any doubt when the big notes are coming, because Carly has to squeeze them out. She's almost like a mime, a loud mime.
Blossom, Bubbles and Simon Say: Randy thinks that Carly keeps smashing it out every week. His praise for her is always overboard. Paula compares her to a dependable dog. Paula's telling everybody that they're in their niche. Simon, though, says that Carly's better than the song.

And for the full recap, head over to Zap2it's It Happened Last Night blog.