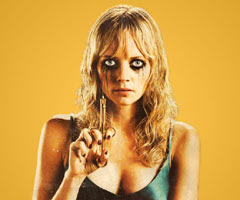 "Grindhouse"
Directors: Quentin Tarantino/Robert Rodriguez
Fien Print Ratings (out of 100): "Planet Terror" (64), "Deathproof" (70)
In a Nutshell: It's hard to think of a moviegoing experience more context-dependent than "Grindhouse," Quentin Tarantino and Robert Rodriguez's new double-bill, which is less a cohesive cinematic effort than a loving tribute to a certain way of seeing movie. I guess I figured I was gunning for irony by going to see "Grindhouse" at Century City's AMC 15, a brand-spanking-new theater that the chain describes as its new flagship. It's just inevitably and invariably wrong to watch a movie like "Grindhouse" in stadium seating with surround sound and plush comfy chairs. But I'm sure I'd have been able to easily overcome those flaws if the crowd hadn't blown goats. Yeah, if you were in the 2:45 show this afternoon at the AMC Century City 15, odds are you suck. Sorry. It's just true.

"Grindhouse" is a movie you've gotta see with several hundred of your closest, most like-minded friends, people willing to embrace the movie on its merits, to laugh at the cornball dialogue and stilted acting, to express vocal distaste (in a good way) at the outrageous gore and to cheer when a chick with a machine gun for a leg blasts into the air and turns dozens of zombies into goo in a single motion. During Rodriguez's "Planet Terror," there was occasional audience engagement -- laughter here and there, periodic hoots. During Tarantino's "Deathproof"? Near-total silence. A couple chuckles. Half-hearted applause at the end. And, I don't wanna be additionally judgemental, but an awful lot of people took bathroom breaks at the intermission rather than watching the faux trailers by Rob Zombie, Edgar Wright and Eli Roth. I know that 3:12 is a long slog for an afternoon at the movies, but come on... I'm gonna assume that the crowd I saw this with will prove to be the exception, rather than the rule, because I thought "Grindhouse" worked pretty nicely.

My crowd probably won't be the only one to find "Planet Terror" to be the more obvious audience-pleaser. There have been so many zombie movies in recent years that it's a bit redundant, really, hardly resurrecting a genre at all. Plus, Rodriguez mined similar territory in "The Faculty." But familiarity didn't keep me from being properly grossed out by Greg Nicotero's makeup/effects, nor did it keep me from adoring several utterly gonzo performances, particularly Rose McGowan as a go-go dancer (Not a stripper! There's a difference!) named Cherry, who becomes cinema's sexiest amputee ever. Also excellent (in that she understands the campy style of the film) is Marley Shelton, whose comic gifts always surprise me because of how bad she's been utilized by Hollywood. Michael Biehn, Freddy Rodriguez and -- shockingly! -- Fergie (or "Stacy Ferguson") also get it.

You don't need any outside knowledge to be amused by "Planet Terror," but "Deathproof" doesn't work as well if you don't vaguely know "Vanishing Point" or "Two-Lane Blacktop" or "Gone in 60 Seconds" (the original). While Rodriguez has no particular authorial stamp besides his ability to work fast and wear countless hats, Tarantino's cinematic fingerprints are all over "Deathproof" so completely that it's a dual homage to both '70s driving B-movies and just to himself. It's talky, vulgar and tremendously entertaining, especially in its second half. It's also made with a skill that nearly defeats the purpose and certainly amplifies Rodriguez's calculated amateurism. Tarantino gets Tarantino-ready performances (not the same as good performances) from folks like Tracie Thoms, Rosario Dawson and real-life stuntwoman Zoe Bell, who can't act but still manages to seem magnetic.

As an actor, Tarantino is a needless distraction in both films. Looking puffy and balding, he's begun to resemble a less-talented Randy Quaid. And I'm sure that Tarantino is a fan of "The Last Detail," so he should probably just be casting Quaid instead.

[While I'm on the subject of Tarantino, may I temporarily digress: Is anybody ready for Tarantino to make a real movie again? I know that sounds elitist, but seriously. "Kill Bill" was supposed to be a little lark he made to have fun with Uma Thurman. "Grindhouse" was supposed to be a little short-film he made to have fun with Rodriguez. Meanwhile, the maturing filmmaker behind "Jackie Brown" seems afraid to make another movie in that direction. It's not that I don't think Tarantino should be able to make whatever frivolous larks he wants to, but "Grindhouse" isn't a movie, its mutual masturbation between two filmmaker/geeks and their geeky followers, an exercise in substance-free post-modernism that Tarantino transcends (because he has that ability) and Rodriguez doesn't. It's entertaining and I'd rather have this than anymore "Hills Have Eyes" remakes, but couldn't Tarantino mix things up? I mean, you don't see a master filmmaker like Martin Scorsese wasting his prime years on remakes and recycled genre movies. Ha! I kill me.]

My favorite of the fake trailers was Wright's "Don't," though I also really laughed at a fake trailer *before* the movie for Rob Zombie's "Halloween." Oh. That one was real? Why, Rob? WHY?!?