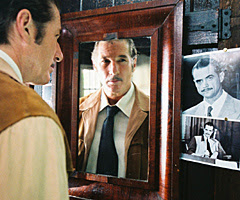 "The Hoax"
Director: Lasse Hallstrom
Fien Print Rating (Out of 100): 68
In a Nutshell: If former Red Sox first baseman Dave Stapleton is remembered, it's for two things: In Game Six of the 1986 World Series, John McNamara opted not to bring Stapleton in as a defensive replacement in the 9th inning to allow Bill Buckner to celebrate the Series win. Oops. Stapleton's other claim to fame is that he's the only major leaguer in history to play at least seven seasons with his batting average dropping each successive season. Why do I mention that? Because since 1993, Lasse Hallstrom's feature film credits have been "What's Eating Gilbert Grape," "The Cider House Rules," "Chocolat," "The Shipping News," "An Unfinished Life" and "Casanova," a nearly Stapletonian rate of career decline. [Encyclopedic film fans will recognize that I left out "Something to Talk About," which came between "Grape" and "Cider House" in chronology, but not quality and therefore I'm pretending it never happened.]

Lasse Hallstrom's Stapleton-esque regression thankfully comes to an end with his new film "The Hoax," a smart, solidly constructed historical dramedy featuring one of the two or three best performances of Richard Gere's career ("Internal Affairs" is tops in my book, if anybody cares) and an award-worthy turn by Alfred Molina. The thing Hallstrom can't help is that he's following some great films. Jonathan Demme already made the definitive Howard Hughes semi-hoax movie ("Melvin & Howard") and Orson Welles already made the definitive Clifford Irving movie ("F for Fake") and this terrain is all too similar to George Clooney and Charlie Kaufman's "Confessions of a Dangerous Mind." So while I respected what a study and straight-forward job Hallstrom did here, I kept thinking that with a director possessed of more daring, "The Hoax" could have been a late-year Oscar contender instead of a mid-spring orphan.

The film requires a sense of bittersweet, loopy whimsy that Hallstrom absolutely used to possess (perhaps going back to "My Life as a Dog"), but the moment "The Hoax" requires Hallstrom to be his most nimble is when he starts taking everything too seriously. In its first half, "The Hoax" rides on Clifford Irving (Gere) and Dick Susskind's (Molina) giddy amazement that they're in the process of pulling off a hoax of outrageous proportions. Irving's rise as a fast-talking snake oil salesman who can't believe everything he's getting away with is the most likeable Gere has ever been. In the second half, as Irving's grasp on reality begins to slip, Gere stays compelling (though I'm still not sure whether or not he's trying a New York accent), but Hallstrom's touch becomes leaden and annoyingly literal. Hallstrom allows for no ambiguity whatsoever in the facts of the case or of Irving's character, which is the dull way out. It was here that I wanted Kaufman's version of the story (though William Wheeler's script is admirable).

"The Hoax" features the supporting cast of every NYC indie ever made, including Hope Davis (excellent), Stanley Tucci (distractingly unbald), Marcia Gay Harden (sporting the latest in a string of BROAD accents) and Julie Delpy (beautifully under-clothed, but annoyingly under-used).

Is it just me, or is 2007 already starting off as a far better year for movies than 2006? Or is this just an evil tease before the Summer of Sequels begins?
Tweet