NetflixWatch: "A Guide to Recognizing Your Saints" 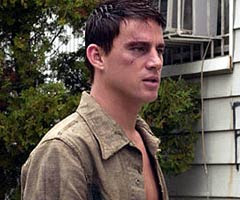 "A Guide to Recognizing Your Saints"
Director: Dito Montiel
Fien Print Rating (Out of 100): 65
In a Nutshell: Dito Montiel isn't a trained filmmaker, nor is he a polished storyteller, which proves to be both a boon and a disadvantage to his first film, "A Guide to Recognizing Your Saints," based on his own memoir. On some level the film can be easily slotted into the coming-of-age-in-NYC genre, but it manages not to feel entirely like a rehash of "Mean Streets" largely because Montiel doesn't come out of that tradition. My understanding is that the book is about Montiel's life in music, an aspect almost completely elided from the movie, which is a series of memories, only slightly connected, from the year leading up to the writer-director's departure from his friends and family in Queens. Because Montiel isn't a conventional storyteller, the movie isn't exactly about what it's structured to be about -- the events that force young Dito's (Shia TheBeef) exit from Queens and make it hard for old Dito's (Robert Downey Jr.) return are underplayed. There are two tragedies mentioned early in the movie that don't spark any emotional reaction when they occur, but this isn't a "The Way My First Interactions With Death Changed Me" memoir. It's more "Glimpses From a Life Left Behind," and Montiel is just experimental enough to use his new medium to capture the scattershot memories of youth -- Dialogue plays out of synch, key scenes seem to be edited out, important relationships are just accepted, but not explained. The movie doesn't have the feel of reality -- it's too aesthetically contrived for that -- but it has the tone of reality.

The present tense part of the story is frustrating and distracting, an unnecessary framing device that implies more of a straight-forward narrative arc than the movie delivers. As flawlessly twitchy as Robert Downey Jr. may be, there isn't a shred of Shia TheBeef's version of the character in the modern Dito. Rosario Dawson pops up for two scenes, preaches a little, but doesn't contribute much. And Chazz Palminteri and Diane Wiest, wonderful in the 1986 flashbacks, are burdened by shoddy old age makeup in the present. Then, as ridiculous as the Shia-to-Downey aging process may have been, the idea that Channing Tatum aged into the film's Final Act "Look Who We Dug Up" guest star was really more than I could take and I laughed out loud at the absurdity of it.

While Steven Spielberg may be convinced that TheBeef is a star (and the early box office for "Disturbia" implies that he may be right), I have a sense that "A Guide For Recognizing Your Saints" will probably be best remembered for the early performance by Channing Tatum. Having only seen him previously in "Step Up," I don't know that he's an actor, but he's one thing that TheBeef isn't -- he's a big screen presence, dynamic and impossible to take your eyes off of at times.
Tweet